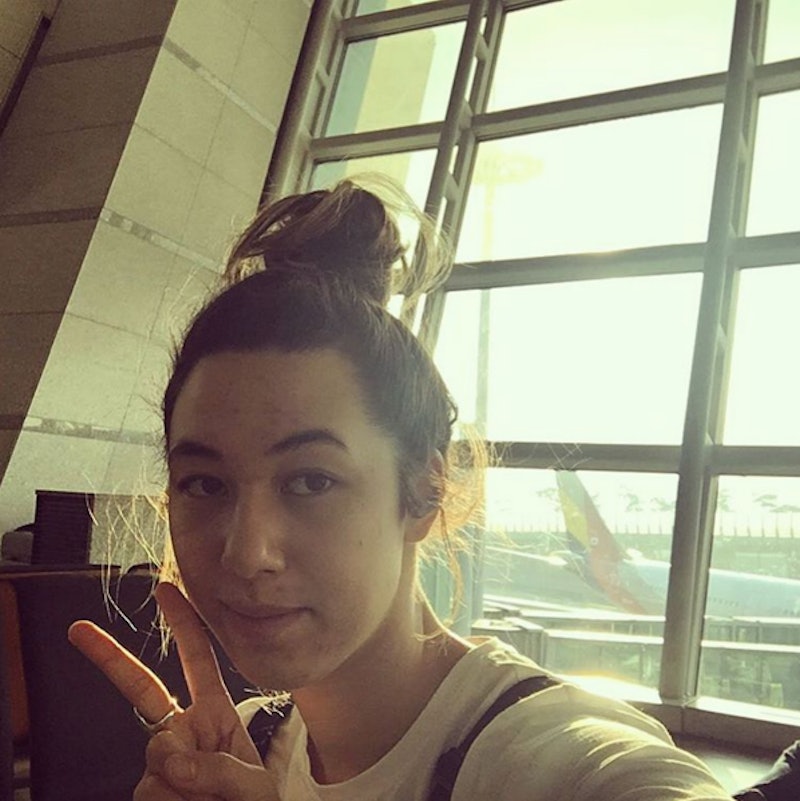 After spending four months in South Korea, where I dedicated a lot of time to writing about Korean beauty trends and eating my weight in kimchi, I'm back in the United States, and I've realized it's impossible to sum up my travels in a single conversation. No matter how detailed I get, I only begin to scratch at the surface of what I actually did, saw, and experienced. But in these repetitious chats, I've also realized there are certain questions that friends, family, and even strangers ask me over and over again, and most of them are about Korean beauty and fashion myths.

These questions about K-beauty aren't surprising to me, since the industry has really exploded in popularity over the last year. What has taken me aback is the lack of reliable information about Korean fashion and style that's readily available despite all of the curiosity. Many of the questions I've been getting show that people are having a hard time making a distinction between cultural assumptions and true facts, but they're eager to know more about Korean culture overall.

As a half-Korean woman, it's exciting to know that my American friends are interested in learning about that part of my own background, so I'm happy to have these conversations and debunk all of the myths with anyone who will listen. Here are seven of the most common questions about Korean fashion, beauty, and culture I've had to answer since returning to the United States.

1. All Korean Women Have A 10-step Beauty Routine

Certainly, some Korean women have a 10-step beauty routine, but it is by no means required or even necessarily the norm. I think part of the reason this myth persists is because, in my experience, beauty and skincare are taken very seriously in Korea, by all genders and ages.

For example, a really common weekend activity is spending the day at a jimjilbang, a kind of traditional bathhouse, and getting a series of spa treatments that range from hanging out in a sauna to getting scrubbed from head to toe. So even if the 10-step beauty routine might be more media hype than reality, there is a certain attitude and seriousness toward skincare in Korea that makes it totally believable.

2. Having A Tattoo Is Illegal

I've written about Korean tattoo culture before and the reasons why tattoos are taboo in Korea, but that doesn't mean that having a tattoo is illegal. Much of the confusion comes from the fact that tattoos can only be legally administered by a licensed medical doctor in Korea, and so Korean tattoo artists are forced to work underground and oftentimes illegally.

But there's no tattoo police waiting to write you a ticket if you're flaunting your ink; and though I wouldn't say it's common to have a tattoo, I definitely noticed a growing number of Koreans, especially younger Koreans, who are getting tattoos and even showing off their body art in public.

Lots of fashion trends in Korea trickle down from K-pop idols. I've even heard a theory that part of the reason tattoos are becoming more popular and widely accepted in Korea is because there are more K-pop stars with tattoos. But for the most part, Seoul's street style is tame, closer in spirit to Paris than Harajuku in Tokyo, favoring more minimalist, well-structured looks over bright colors and accessories.

Though this sounds like a myth, it's actually true. From identical sneakers to coordinating parkas, it's not uncommon to see young Korean couples wearing matching outfits as they walk down the street or take the subway. You can even get matching underwear sets at some lingerie stores if you still want to match your S.O. but don't want anyone else to know.

5. Korean Beauty Products Are Better Than American Ones

One oft-seen Western beauty product I encountered was Bioderma Sensibio H2O Micelle Solution, and a whole lot Kiehl's, which although more expensive than in the U.S. was also beloved in Seoul. The appeal of K-beauty, in my opinion, is the innovation (like sheet masks) and the high quality for the drugstore price.

6. Everyone Has Had Plastic Surgery

Seoul has earned a reputation as a capital for plastic surgery, and it's not without reason. Plastic surgery is common, with ads for clinics plastering the subways. Double-eyelid surgery is the most popular procedure, and it's become so common that I've seen it described as a "beauty treatment" rather than actual surgery.

However, there are also many Korean women who proudly remain plastic surgery-free, and there's some indication that a more natural look is coming into vogue. It was big news this fall when two Korean movies featured actresses with monolids in starring roles. Other celebrities have spoken out, too. In an interview with ELLE, K-pop star CL explained that her record label pressured her to get plastic surgery but she refused because, "Like I said before, I love CL, but I still want to be Chaerin. And if I felt like I had to change I would. But I love the natural way I look."

Long story short, not every Korean woman has gone under the knife, even though there is pressure to do so.

7. There Are No Plus Size Korean Women

The most common question I get asked about Korean fashion and beauty is about diet. "How do all Korean women stay so slim and trim?" Well, the answer is simple: Not all Korean women are skinny, and there are plus size Korean women out there. This myth is, in my opinion, one of the most nefarious and needs to be debunked once and for all.

Part of the misconception stems from the differing definitions of "plus size." In the United States, plus size fashion usually starts at a size 14, but in Korea, plus size is generally a size 8. This means that many women who are plus size in Korea would wear straight sizes in the United States. And so these "plus size" Korean women are functionally invisible to foreigners even though they're considered to be plus size in their own country.

There is some truth to the fact that, on average, Koreans are thinner than Americans. The country has one of the lowest rates of obesity, according to the Organization For Economic Co-operation And Development. But this doesn't mean larger Korean women don't exist. In an effort to highlight some of these individuals, Korean plus size model Vivian Kim launched a magazine celebrating body positivity called 66100, on which she regularly features other plus size Korean models and celebrities.

But Kim's efforts are one of the rare moves toward body acceptance in Korean culture, and if anything, I found that the myth that there are no plus size women is pervasive in Korea, too. The result is a culture in which there is constant pressure to lose weight, with ads for diet supplements and low-calorie soups constantly blaring on TV. In my experience, body positivity still has a long way to go before it becomes mainstream in any significant way in Korea, but one easy way to help it along is to put an end to this myth that all Korean women are or should be skinny, or that there are just no plus size women.

In the meantime, we can all delight in the knowledge that K-beauty and fashion trends do have a lot to offer us. Even if not everyone dresses like a K-pop star.