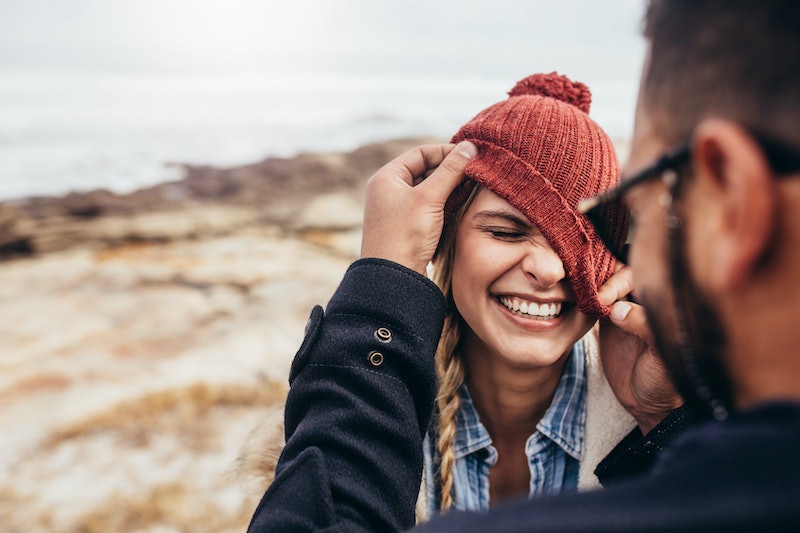 We've heard about the idea of the soul mate for years — that somewhere out there lurks our one true love, the cheese to our macaroni, the potato to our salad. The soul mate isn't just the idea that there's someone out there that we could settle down and be happy with — the soul mate concept postulates that you and your love are somehow cosmically pre-destined, and that ending up with anyone else would be a travesty. Pretty much every big rom-com ever marketed alludes to the notion; it's almost like you can't discuss dating and romance without at least mentioning the possible existence of soul mates.

Looking at recent marriage statistics, you might also be tempted to believe that soul mates are real. Although the rates of marriage in the United States was steadily going down between 2008-2010, the statistics have slowly started to creep back up over the last couple years. In 2013, there were 2.08 million couples who tied the knot, and in 2014, that number jumped up to 2.14 million.

But how much do we really know about the science behind this endearing concept? Is it possible that there is just one person out there for us, forever and always, just like the songs say? According to the no-nonsense scientists and experts who make it their life's business to prove — or disprove — things through tangible research, the answer is no. So sorry, all you hopeless romantics! You can fall in love, stay in love, or do anything else with love — but it won't have anything to do with soul mates.

1. Statistically, It's Almost Impossible To Meet A Soul Mate

Let's start by assuming that, if soul mates do exist, they are selected at random at birth. If they're within the same general age group, you're left with about half a billion potential companions from all over the world. That means you would probably have to travel to every remote pocket of the planet — because that one out of a half a billion likely didn't go to your high school. The person might not even speak the same language(s) as you do.

Randall Munroe, author of What If? Serious Scientific Answers To Absurd Hypothetical Questions , lays it out pretty clearly. Say you make eye contact with around 30 or 40 strangers a day; if just 10 percent of those individuals were in your age group, you would become acquainted with 50,000 people in your lifetime who are prospective soul mates. But remember: you're looking for one in half a billion, so at this rate, "you would find true love only in one lifetime out of 10,000." If that sounds pretty impossible to you, that's because it is. The odds are not in your favor, whatsoever.

2. Science Says We Don't Have Souls

A heavy topic, I know, but we've got to address it. Sixty-four percent of the American population believes that we have a soul, and that it survives after our physical bodies die (down from 69 percent in previous years). Despite this popular opinion, much recent scientific evidence points to the opposite. Using a range of disciplines, including psychology and neuroscience, many experts have done studies to claim that the soul as we know it doesn't exist. All of the memories, feelings, and sense of personal identity we think come from an immaterial soul are actually just "a vast assembly of nerve cells and their associated molecules," according to Francis Crick, a biologist who co-discovered the structure of the DNA molecule.

Joshua Greene, a Harvard psychologist, agrees. He adds that this isn't something scientists talk about much in public, though, since it's a sensitive topic. One of the reasons we want to believe in souls so strongly is because our definition of them puffs up our egos (and blunts our fear of death). Still stuck in Cartesian dualism, we see our physical bodies separate from the "spiritual stuff of souls," the latter of which serves as a morality barometer, helping us decide from right and wrong. We want that sixth sense around; it makes us feel more relevant and virtuously in touch with the world.

But cognitive scientist and Rutgers University professor Julien Musolino, author of The Soul Fallacy: What Science Shows We Gain From Letting Go Of Our Soul Beliefs , says we can still hold onto ethics and morals if we abandon this particular idea of the soul. We actually have a lot to gain a lot from leaving it behind; he claims that our obsession with the soul has stifled our progress in the past, and it clouds our heads when it comes to subjects such as the criminal justice system and abortion.

Maybe we have a lot to learn from Dr. Musolino's argument, because as you'll see below, believing in the soul not only often hinders us from moving forward as a society, it makes us dissatisfied as individuals mulling around in romantic relationships.

Science says there's a high likelihood you will be sorely disappointed if you go through life thinking there is one person out there who can complete you. Spike W.S. Lee, a marketing professor at the University of Toronto, conducted a study on the topic and found that people who believe in a perfect other half are more unhappy in their relationships. They also won't work as hard to resolve conflicts with their partner if they are under the impression that the person "completes them."

The research suggests that there is a much better, more practical way of viewing your romantic relationships: seeing your SO as your best friend instead of your soul mate. Couples who adopt this philosophy fight less, have more sex, and will probably be together for a longer amount of time. When "it's less about the magic, or destiny," there is less pressure, and people find themselves happier.

I know that, on the surface, this may not seem like cold, hard evidence that the concept of soul mates is faulty, but think about it this way: if soul mates were a real, attainable thing, why would our constant chase after them make us so miserable? Finally, you can't deny the studies that show how much healthier your love life could be if you let go of the one true love idea.

4. Monogamy In Mammals Is Rare To Begin With

Hey, humans are also animals, after all. While 90 percent of birds are monogamous creatures, only three percent of mammals practice the same mating rituals. Studies say that social monogamy in male mammals is so uncommon that it requires a "fundamental change in male reproductive strategy." If the males are trying to survive and procreate, you can imagine that sticking with one female would present a few problems.

Granted, primates see more monogamy than the rest of the mammal kingdom — about 25 percent of them stick with one partner for life. There are a few different explanations for this behavior. For one, the father might stick around because the mother needs help caring for and protecting their young. (How sweet.) There is also the possibility that the male can't physically mate with more than one female at a time, due to how spread out the population is. (Not as sweet.) There are also arguments that center on resources and territory.

Whatever the explanations may be, monogamy remains to be the exception to the rule among mammals. Tim Clutton-Brock, a professor of evolutionary biology at the University of Cambridge, reminds us not to draw any definitive conclusions about humans and monogamy, but he did tell CNN that these findings suggest "the ancestral condition for humans is probably polygny." In other words, evolutionarily speaking, it isn't likely there is only one person who could make us happy.

5. Our Brains Are Hardwired To Deal With Breakups

Researchers at Saint Louis University in 2015 examined something called mate ejection, which is just a fancy term for people breaking up and moving on (sounds better though, doesn't it?). The MRIs conducted during the study showed that the same part of the brain that lights up during cocaine addiction recovery is activated when a person is dealing with a breakup. This neuronal activity in the brain increased greatly in both men and women. Dr. Boutwell claims that different sections of the brain work effortlessly to sever ties, just like they do when someone is in drug addiction recovery.

But our brains weren't always this way. They have evolved to cop such losses, and "natural selection has designed mate ejection" over the years. However, we each have individual abilities to dump someone and move on; for some, it isn't so tough, while others have a harder time. It all depends on environmental and genetic factors.

Science says that we are hardwired to participate in mate ejection, which puts a damper on the whole soul mate argument, to say the least.

6. Love Itself Is A Chemical Reaction

Syracuse University psychology and neurology professor Stephanie Ortigue led a study on what it takes to fall in love, discovering that it only takes a fifth of a second for the mind to decide the body is head over heels. The research also found that there are 12 different areas of the brain that light up and work together when you fall in love, releasing chemicals like dopamine, adrenaline, oxytocin, and vasopression, just to name a few.

Professor Ortigue told Science Daily that these studies suggest it's the brain that switches on the in-love signal, not the heart. All the heartfelt feelings we get when we're wild about our partner — butterflies in the stomach, deep aches to simply be beside them — are actually coming straight from the brain and manifesting in ways we believe are from the heart center.

The very concept of a soul, as we discussed above, sits in stark contrast to this evidence. That spiritual, non-physical soul you've been convinced is real your whole life is the complete opposite of your brain. So if falling in love comes from the neural pathways that sit up there in your noggin, you can bet there's no one single person out there who can make you light up.

More like this
This Psychological Effect Might Be Keeping You From Hitting Your Goals
By Lexi Inks
The 19 Best Tweets & Memes About Bisexual Awareness Week
By Lexi Inks
Why A Libra & Capricorn Couple Will Have A Difficult DTR Conversation
By Kristine Fellizar
Are Quality Time & Gift-Receiving Love Languages Compatible?
By Lexi Inks
Get Even More From Bustle — Sign Up For The Newsletter