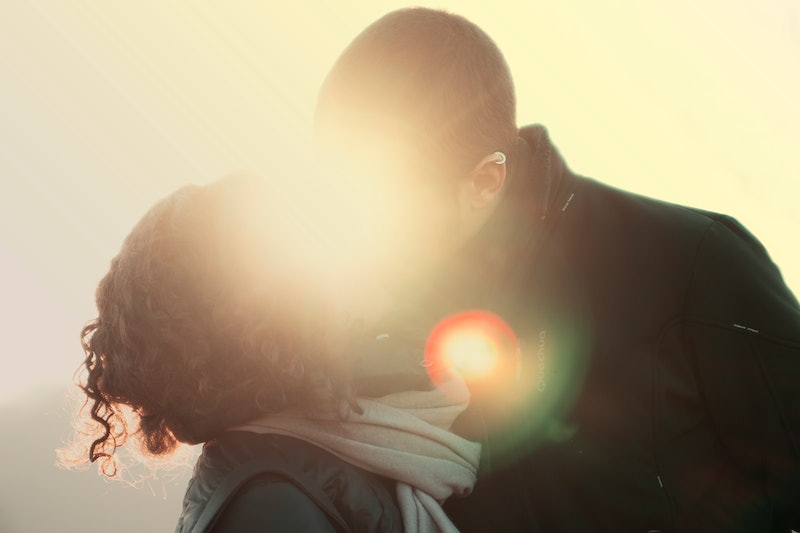 I’m not the most romantic person in the world, and even as a married woman, the label “soul mates” still makes me queasy sometimes. What I do believe is that when it comes to love and finding a true life partner, when it’s right, you’ll just know it, and you’ll understand why it never worked out with anyone else before. The signs you've found your soul mate are probably not what you'd expect.

The first time I met my husband, he was literally living in a bachelor pad, hosting a guys’ night that I ended up crashing with a friend. He was surrounded by liquor, empty pizza boxes, and the lingering odor of beer and eau de guy funk. Contrary to what the movies might tell you, we didn’t lock eyes in slow motion while some Colbie Caillat track blared in the background. There wasn’t a mythical moment when the clouds parted and I knew I’d met “The One.” It happened much later. A few years after we got serious, I sat across his parent’s kitchen table as he talked to his Dad about something that probably had to do with plumbing, and all of the sudden I could picture growing old with the guy. It was a simple as that. I just knew that when I was 50-something, I wanted to be looking at that man outside the window shoveling snow or washing our cars.

If you’re lucky enough to have found that special man or women you can kick life’s ass with, you might notice a few patterns start to appear that in your early 20s which you may have labeled boring, but which you now realize are just plain healthy. Who knew that having an adult relationship free from Facebook drama and drunken breakdowns could be so refreshing?

Check Out The Mastery of Love: A Practical Guide to the Art of Relationship, $7, Amazon

1. They Take On The World Together

Your union will be tested on the daily. There will be jealous friends and admirers who don’t respect anything lasting longer than a season of a Netflix series. There will even be family members with conflicting personalities who have to deal with it, because you went and fell all in love and stuff. In the face of what can potentially be a world of negativity, you have to take on the world as a united front. Don’t share every argument with your friends or go running to your mom with your list of annoyances. The best things about finding your soul mate is that you no longer have to face most of those scary adult things alone.

2. They Make Each Other Laugh

My work computer rarely escapes getting sprayed by iced latte at least once a day. I send him “Drake Face” memes attached to angry texts about all the things I want to say to my boss and he sends pics of people doing stupid things in public followed by a Step Brothers reference. A good sense of humor is hard to find. Your soul mate will know how to touch you where it counts the most: Making you laugh until your stomach hurts.

3. They Avoid Nagging And Keeping Score

When you commit yourself to someone, you’ll quickly learn that some things are not worth the battle. I’ve come to accept a lifetime of seeing beard shavings sprinkled over my sparkling sink (every single damn time I clean the bathroom) and the literal sh*tshow that is my toilet whenever that heavenly mate of mines eats a pint of Ben and Jerry’s. When you realize you’ll be spending your life with one person, you learn quickly there’s bigger fish to fry.

And save keeping score for bowling. The point is to keep each other happy the best way you know how, as long as you both are contributing equally. Do it because you want to — not because you’re competing to be the better partner.

Spending a life with someone guarantees they will witness you making an ass of yourself at least once. You’ll need to get familiar with the recipe for humble pie, because truly loving someone is less about winning and proving points, and more about living together peacefully. Although “I’m sorry,” “My fault,” “And I was wrong” may feel like licking a razor blade lollipop, a true sign of a soul mate is that they won’t use your moments of humility as an opportunity to run a victory lap around your feelings.

5. They Know You Better Than You Know Yourself

My husband knows that a blanket + the corner of our sectional + me shaking my leg = what is about to be one epic nap. I didn’t even notice I shake my leg when I’m sleepy until he pointed it out. I’m not all about the Jerry Maguire theory of “You complete me,” but I will say that any soul mate worth his or her weight will help you not just learn about life, but about yourself as well.

6. They Develop Their Game Plan

Maybe you’re not trading vision board ideas over Pinterest on the regular, but most couples who are in it for the long haul have similar ideas of how there futures will form together. Your soul mate should know about your dreams of starting a yoga camp on some South Pacific island when you retire. And each day, in some small way, you should be working towards those goals together.

7. You Find Yourself Swooning Over Little Things They Do

Suddenly, you realize sex isn’t the only way to express your affection, and seeing them take out the trash turns you on just as much as seeing them sweat in the gym. That fluttering in your stomach isn’t from that Grilled Stuft Nacho Box you had for lunch — that’s just some good old-fashioned sexual chemistry. When you’ve found your soul mate, attraction is about more than glistening abs and a killer set of dimples.