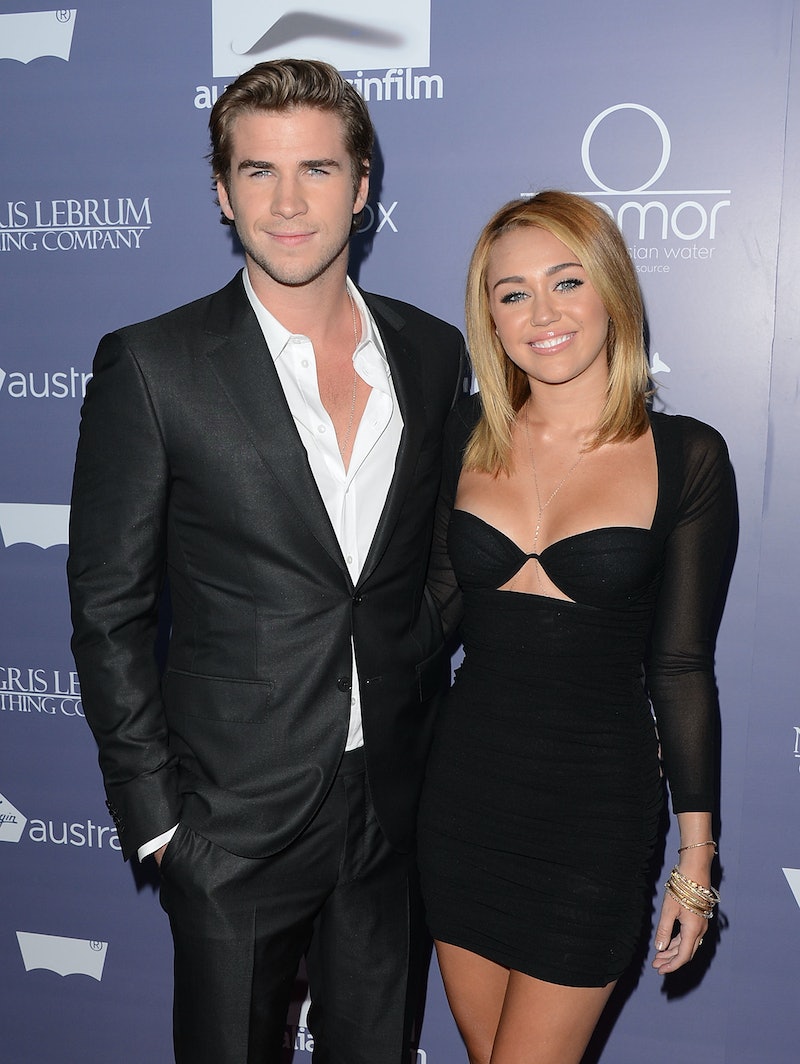 Something truly magical happened over the weekend, and it wasn't just the calendar flipping from 2015 to 2016. While the rest of the world drank champagne and stayed up super late celebrating the new year, Miley Cyrus and Liam Hemsworth were hanging out together. This is not a drill! Reportedly, the former couple was spotted hanging out at an Australian music festival looking "very affectionate," and apparently, they spent time in the VIP lounge with Hemsworth's brother, Chris, and his wife, Elsa Pataky. Hmm. Sounds pretty cozy to me!

I don't know about you, but I am ready to take this news and run with it. When the news first broke that they had decided to split, it was heartbreaking. They're just so perfect together! How could you not think so if you've ever seen The Last Song?! And if Cyrus and Hemsworth have decided to give it another try, that means that love is truly real and it exists in our world. A world that was a better place back when those two were still engaged.

And while it's totally possible they aren't actually back together and they're just friends, it's totally within the realm of possibility that what people witnessed over the holiday is actually proof that they're together again. Need more evidence? There is plenty.

Cyrus Hung Out With Hemsworth's Sister-In-Law, Too

Pataky shared a photo of her with Cyrus and other friends on Instagram Sunday, so it seems like Cyrus hanging out with Hemsworth on New Year's wasn't just a fluke. Was she actually in Australia specifically for the purpose of hanging out with the Hemsworth fam?! If she's spending time with her ex's sister in law, that might mean that their get together wasn't exactly casual.

She Helped Him Find A Dog To Adopt

Cyrus has always been outspoken about her passion for shelter animals and has rescued plenty of dogs, so obviously, she was the perfect person to help Hemsworth find a furry friend of his own to adopt. Or was she the perfect person for the job because they're back together and decided to find a dog they could share? Hmm? Hmm?

Hemsworth Has Admitted He Still Has Feeling For Cyrus

In an interview with Men's Fitness in October, Hemsworth said:

You fall in love with who you fall in love with; you can never choose. I guess some people just come with a little more baggage. I mean, look—we were together five years, so I don't think those feelings will ever change. And that's good because that proves to me that it was real. It wasn't just a fling.

Sounds like someone who would be open to getting back together with that ex he was talking about to me.

Legit everyone who commented on that photo immediately got involved in a debate about whether or not this was a text that had to do with Liam. My vote? It totally is.

And She Recently Said That They're "Still So Close"

"Me and Liam are still so close and we love each other, and they make it like there is negativity," she told Elle UK last fall. If that doesn't sound promising, I don't know what does.

Fingers crossed more evidence appears soon — or that Cyrus Instagrams something from her weekend other than that terrifying bug. Maybe a selfie with Hemsworth, perhaps? A girl can dream!