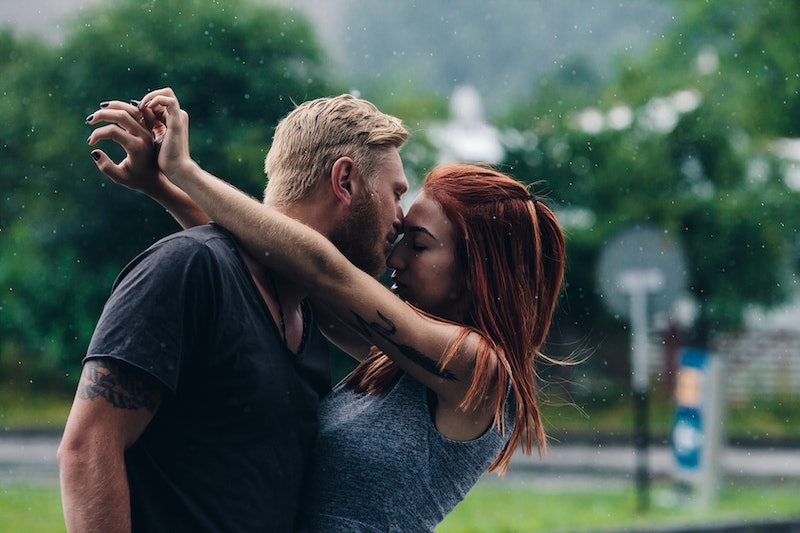 There's been much debate in regard to whether each person just has one soulmate, or if each person has plenty of soulmates, or if, in fact, soulmates are a silly and frivolous notion altogether. If you search for it, there is some somewhat dubious scientific proof that soulmates are real, but before we go down that rabbit hole, I think it's worth defining and denoting which type of soulmate I mean.

According to New Oxford American, a soulmate is just "a person ideally suited to another as a close friend or romantic partner." By that meaning, soulmates obviously exist — there are definitely some people who are more ideally suited together than others. But a soulmate, in the more metaphysical sense of the term, has a deeper, more profound connotation. This type of soulmate is something based in a more spiritual plane — and historically has been associated with just one person. In other words, each person has just one soulmate out there, and if you blow it with them, that's it.

I don't believe that. I do, however, believe in soulmates in the dictionary definition of the word — as in, some people are truly suited for each other, and some are not, no matter how hard they try or how good they look on paper or even how much they love each other. But don't take my word for it. Here's what science has to say about soulmates.

Thinking of a partner as your soulmate is the wrong way to look at a relationship. Or so says one study, titled "When It Hurts to Think We Were Made for Each Other," which asked participants to pick between phrases and images that either suggested that their take on love was was a one-time, soulmate-y thing, or whether it was more of a warty, bumpy, realistic journey. Unsurprisingly, the soulmate group was way more negative in regard to problems in their relationships than the more realistic group.

“People who view themselves as soulmates tend to be less satisfied when they think of the conflicts in their relationships,” says Spike W.S. Lee (not to be confused with Spike Lee) of the University of Toronto, who coauthored the study with Norbert Schwarz of the University of Southern California. “It’s inevitable. In the soulmate frame, conflicts are bad. People think, 'Well, maybe we’re not the perfect fit.'”

In the book What If?: Serious Scientific Answers to Absurd Hypothetical Questions, one-time NASA roboticist Randall Munroe tries to answer the question, "What if everyone actually had only one soulmate, a random person somewhere in the world?" Munroe crunches numbers and finds that, mathematically speaking, the chances of finding your soulmate — if there's just one out there for you — are slim to none. For his purposes, he defines a soulmate as someone who is in the same age range as you, which means each person has about 500 million potential candidates.

“Let’s suppose you lock eyes with an average of a few dozen new strangers each day," writes Munroe. "If 10 percent of them are close to your age, that’s around 50,000 people in a lifetime. Given that you have 500,000,000 potential soul mates, it means you’ll only find true love in one lifetime out of 10,000.”

If it's just boiled down to math, the probability of finding your one true soulmate is pretty lousy. Then again, the whole idea of soulmates is kind of allergic to math. It's a much more ephemeral, diaphanous concept. So maybe the fact that numbers "prove" that soulmates are next to impossible to find is just a bunch of baloney in and of itself, because even if you do have to find your soulmate in the midst of half a billion other people, maybe that's just the point — that your soulmate will find you, if you are open to it and look for it, against the odds. Because the odds are irrelevant. Because we're talking about a metaphysical concept.

As the very out-there website The Science of Soulmates reports, soulmates are, indeed, real, and can be proven by science. But once you read through the lengthy, wordy site, you find that the theories listed on the site that are "scientifically proven" to show that soulmates are real are pretty woo-woo.

TLDR: Soulmates are, apparently, one manifestation of energy patterns inherent to all things in the universe. According to the site, "scientific instruments recorded evidence of a fundamental energy pattern that reveals the source of existence and the source of the phenomenon of soulmates."

Though this "evidence" is convoluted and hard to follow, it appears that some believe that soulmates can be proven by studying energy patterns. I'm open to this idea — I was raised in a nontraditional household, and I'm open to many transcendental concepts — but I'm not sure this site actually provides much real proof that soulmates exist, at least according to science. So — back to the drawing board.

Psychology Argues Yes For Soulmates, With A Twist

If science can't definitively prove soulmates exist, what about psychology? "While I do not believe there is such a thing as 'finding your perfectly matched soulmate,' I’ve seen plenty of evidence that we can become each other’s soul mates as the result of a deep and lasting love relationship," writes Shauna H Springer, a licensed psychologist and relationship and lifestyle researcher. She argues that, although two people may not start out as "soulmates" in the classic sense of the word, it's possible to become someone else's soulmate simply by virtue of being a fantastic partner.

A relationship might not start out with a one-way ticket to soulmateville, but it can eventually wind up there over time, she says. Over time, in such a relationship, "the partnership has become so multifaceted and the compatibilities so intricately dovetailed that one's spouse could never be replaced by anyone else," she writes. "Two individuals who have become perfect for and irreplaceable to each other have become soulmates. In this way, soulmates become each other’s 'one in a billion perfect match.'”

So — Do Soulmates Exist?

Who's right? Does math win, making it near-impossible to meet your soulmate, even if such a thing exists? Are the dubitable facts of The Science of Soulmates enough to make a case? Or is it psychology that makes the most sense, with the idea that soulmates are not given, but earned? Hard to say.

If soulmates really are a thing, I think science, math and psychology all take a backseat to transcendental phenomena. And in the case of the spiritual, I think it's less feasible to explain it — instead, it has to experienced.