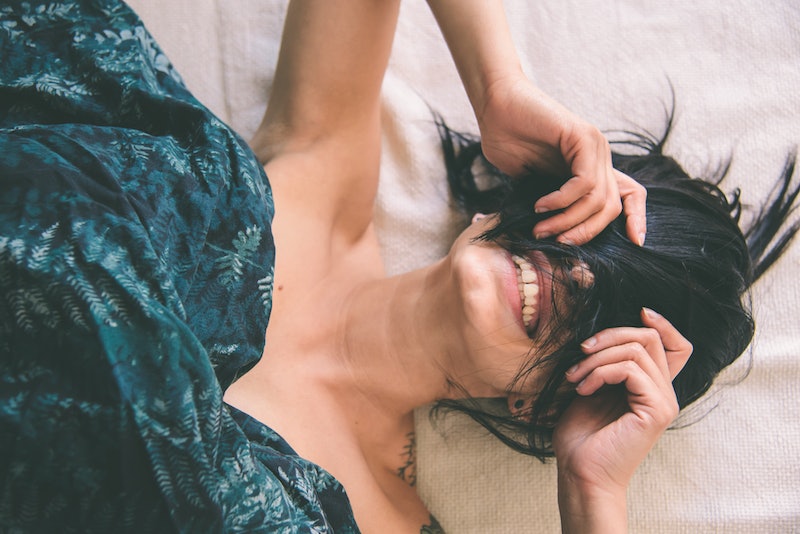 If you're a sex-positive woman, you can't see me, but I'm giving you a standing ovation. The world needs less slut-shaming and more sex-positivity, so congratulations, you're actively making the world a better place by having a reasonable attitude towards female sexuality. But while I am all about you and your bad self, unfortunately a lot of society hasn't caught up, and still doesn't know what to do with sex-positive women. Large swaths of culture are filled with the vocabulary of slut-shaming, and whether through blatant puritanism, or more subtle micro-aggressions, sex-positive women aren't always treated, well, positively.

Even in "enlightened" circles, sex-positivity can be frowned upon, whether consciously or subconsciously. So sex-positive women still have a lot to contend with when it comes to living by, standing up for, or simply stating their beliefs. That doesn't mean we should bend. On the contrary, sex-positive woman should continue pioneering the way for all women, even those who are not in a sex-positive frame of mind. While there are some who might balk at the notion of a woman being overtly sexual, or who might pass backhanded judgement, there's no reason why we shouldn't be entitled to live in a world where it is safe, accepted, and encouraged to be sex-positive as a woman. Here are some challenges faced by sex-positive women:

"Slut," "whore," "ho," "trash". Sex-positive women are often voraciously named called by their detractors, which can be unrelenting and brutal. While efforts have been made among feminist groups to reclaim the word "slut," too often are these words still used to shame women for owning their own bodies and sexuality.

2. People Thinking You Have No Verbal Boundaries

Just because a woman is sex-positive doesn't mean she wants to discuss her sex life with every Tom, Dick and Harry. And yet Tom, Dick and Harry all feel entitled to ask prying questions, and get bent out of shape when they're declined an answer. Sex-positive women are required to answer for themselves and their personal sex lives to an invasive degree. But being sex-positive doesn't give anyone the right to your private life. Discussing your political, social, and cultural beliefs is one thing, but no one is entitled to your personal information.

Likewise, sometimes people feel like sex-positive women's bodies are up for grabs. Whether it's a catcall in the street or an ass grab at the bar, or simply a co-worker leering too closely, or an acquaintance getting too comfortable with an invited arm around the shoulder, sex-positive women often become public property. But being sex-positive is not consent. It means believing in the right to choose when are where to consent, not giving it out carte blanche. When women are sex-positive people may feel as though they are entitled to touch and poke at will.

4. Not Being Taken Seriously Socially Or Professionally

In the eyes of some people, being sex-positive diminishes your worth, or how seriously you're to be taken. I used to write about sex as part of a freelance job, and my boss at my day job, as a result, thought I was a joke, even though that never interfered with the work I did for him. (Turns out he was the joke.) Likewise, personally, a lot of people will just assume a sex-positive woman isn't capable of being in a "real" relationship, and is only out for a "good time". Sex is part of our day-to-day lives, and being able to talk openly and honestly about it isn't something that devalues you, or shows weakness of character, even if some people think it does.

5. The Fact That You're Not Immune To Hate Speech

As tough as you might front, you're still human (I know I am). While most days you're happy to fight the good fight as a sex-positive woman, sometimes (and especially with online comment culture), you can get to feeling pretty sh*tty about all the name-calling and rape threats. Sometimes it can be hard to stick to your guns when people are constantly being brutally malicious and purposefully hurtful towards you.

6. Contending With A Generally Hostile World

Don't be fooled by the the huge strides feminism has made in the last decade. The world is still a largely hostile place to sex-positive women. Body-shaming, slut-shaming, rape culture, and even simple daily actions that show disrespect and misunderstanding are things sex positive women (all women) have to contend with. In our lifetime, at least, this will likely always be the case. It's a slow process of weeding out intolerance from a culture that's so deeply embedded with a history of prejudice. All we can continue doing in the meantime is loving ourselves, loving sex, and not getting bent out of shape just because others are.