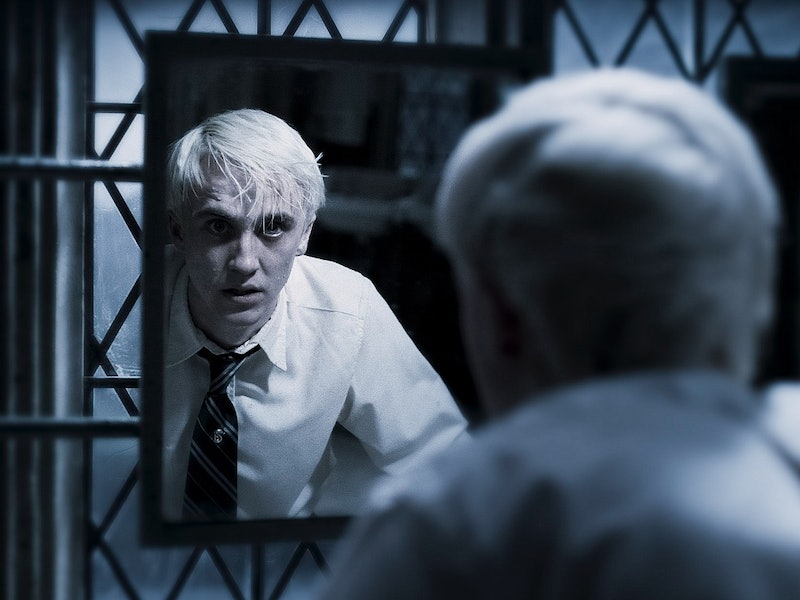 Draco Malfoy was such an indisputable, ridiculous git that for most of years we've known about him, he's been God's gift to meme-kind. However, a deleted Draco Malfoy scene from Harry Potter and the Deathly Hallows: Part 2, might have completely changed the narrative. Granted, it's such a departure from what happened in the actual novels that it might have caused a small fan outrage (or delight, depending on what side of the Draco fence you're on?), so it's no shocker it ended up getting cut from the film in the first place.

We all remember with cringeworthy clarity the scene where Draco Malfoy has to cement his loyalty to the Death Eaters at the Battle of Hogwarts in a temporary moment of attempted dude-broness by Voldemort, who hugs him so awkwardly that everyone in the theater felt his pain. In the movie, we see him hesitantly join his family, looking conflicted but knowing that his loyalties ultimately lie with them. This doesn't happen in the books nearly as theatrically — especially because at this point, we're mainly looking through the squint-y perspective of a boy who is playing possum in Hagrid's arms — but the scene quickly became iconic.

Anyway, shortly after that incident Harry springs back to life and all of Hogwarts bands together to Shut This The Hell Down once and for all. We don't see a whole lot of Draco after that in the film, since we're a little preoccupied with all the relentless death and despair, but filmmakers retroactively released a scene indicating that that wasn't the original plan.

It turns out that rather than just rejoining the Death Eaters and calling it a day, Draco was supposed to pull off a Narcissa and help Harry at the very last second. When Harry first pops up from his supposed death, Draco was supposed to realize that there was hope for the good guys to win after all — and then, of all things, toss Harry his wand to help him defeat Lord Voldemort. The deleted scene was released along with a batch of them a few years ago, and it's shot from a weird angle, but still clearly enough that you can see what's happening (and the "aw HELL no" on Voldy's face).

SO SUBTLE, DRACO. Ten points to Slytherin, I guess. You can see the full deleted scene here:

If you read the books, you understood that through some convoluted logic that Draco was the one who disarmed the Elder Wand from a willing Albus Dumbledore and "won" it. Voldemort mistakenly thought it was Snape, and killed him to become its master; in the meantime, Harry had bested Draco by stealing his wand, thereby becoming the master of all the wands Draco was the master of — including, of course, the Elder Wand. Now, there was no way in hell to make this clear in the film without non-readers going, "Uh wuuuutt?" So this might have been a last ditch effort to make it hit home.

A lot of people were upset that Draco was never ~redeemed~ in the books. We're all so used to that satisfaction of the modern day, three-dimensional bad guy coming full circle and realizing that he's wrong, and there was nothing definitive in the book quite like that. I can't really fault JK Rowling for deciding to go the realistic route with her villains — very few of them admit their wrongness. We get Dudley kind of sort of apologizing, and we get Draco nodding curtly at Harry at the train station in the epilogue, and that's it. But that's also real life, ya know? I can see how they might want to try a more traditional, unsubtle route for the film, but in the end, it just wasn't true to the character at all.

We Really Just Needed Ralph Fiennes To Make This Face

JUST IMAGINE THE GIF POTENTIAL, if only this had made it into the film at a quality we could actually GIF it. BRB, crying over what might have been.

In any case, it makes complete sense that they decided to forego the scene — but you can't help but wonder what JK Rowling's opinions on it were, and why they ultimately wanted it to happen in the first place. I guess stranger things have happened in the Wizarding World.