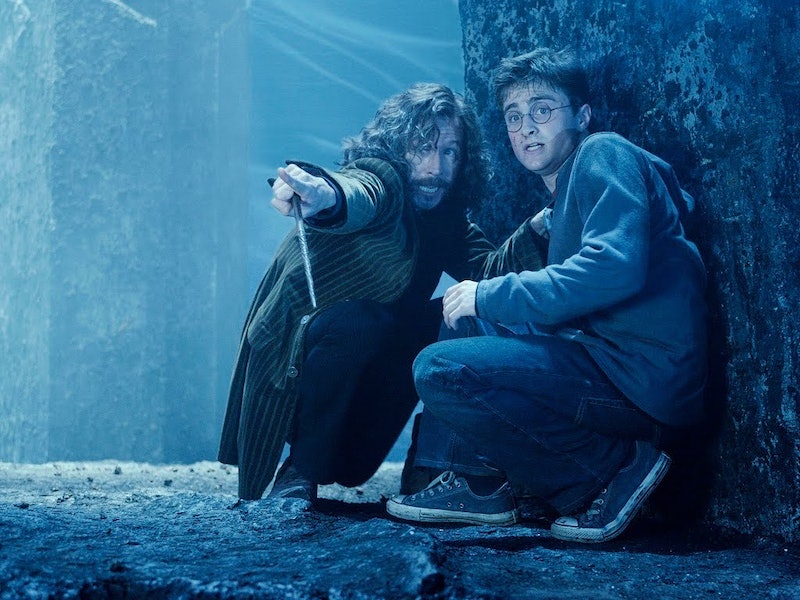 I think it's safe to say having grown up comfortably smack dab in the middle of the first "Harry Potter generation" that about 99 percent of the media I consumed was Potter-centric. In that case, you can't really blame those of us in that sweet spot for occasionally blurring the lines between the books and the movies. Will we always be faithful to the books above all else? Hell, yes. But when you watch a movie — and see it get perpetuated with GIFs all over the web — the images burn into your brain in an entirely different way. Then you, like me, might go back and read the books and realize that some of the most iconic lines in the Harry Potter movies weren't in fact part of the Potterverse at all.

Of course, this is just one among infinity differences between the books and the movies. There's only so much you can do in the time that you're given, so of course changes have to be made, things have to be deleted, snappier comments have to be added in to hit audience members over the heads with themes that were gradually introduced in the books. None of this will matter when the inevitable television series reboot happens sometime in our lifetimes (PLEASE, SANTA?!), but until we have enough air time to accommodate all of our hopes and dreams, the original hopes and dreams from the movies will have to do.

Throughout the novel Harry Potter and the Order of the Phoenix, Molly Weasley chides Sirius Black for the way he treats Harry a little too much like an equal.

While this planted the seed in our heads pretty early that Sirius was using Harry as a little bit of a BFF stand-in, it is less emphasized in the movie version, where instead Molly only drives the point home by citing that Harry is too young to be in the Order. Alas, if the novel version of bringing up James was a stab to the heart, the movie version twisted the hell out of it: instead of getting this buildup throughout the story about how Sirius sees Harry, the literal very last words he says to him mid-duel are "Nice one, James!" And then we were all emotionally wrecked for eternity.

"Sorry, Professor. But I must not tell lies."

SLAM. DUNK. When Umbridge is being apprehended by Grawp and a forest full of angry centaurs, she cries out, "Please, tell them I mean no harm!" and Harry's answer is more satisfying than how I imagine it would feel to fist bump The Rock. Honestly, this sass is so on brand for Harry that this is one of very few instances that I will concede the movie picked up on a brilliant idea that the book did not. This cleanly brought around the horror of Umbridge in full circle. I literally rewound this scene three times the last time I watched it just so I could yell "SUCK IT!!!!" at the top of my lungs. (The Umbridge hate is still so real, guys.)

"No offense, but I really don't care."

This supremely abused GIF has traveled the whole world wide web and back, bless our sassy little hearts, but it's actually taken out of context. Whereas in the book Dobby is the one who overhears a staged conversation about gillyweed and gets it to Harry at the last second just before the Second Task of the Triwizard Tournament, in the movie they clean up the storyline by having Neville talk about Herbology.

Neville: You know, if you're interested in plants, you should use Goshawk's Guide To Herbology. There's someone in Tibet who's growing gravity resistant trees... Harry: Neville, no offense, but I really don't care about plants. Now, if there's a Tibetan turnip that will help me breathe underwater for an hour, great. But otherwise... Neville: I don't know about turnips, but you could always use gillyweed.

In this case, dear Neville saves the day, even though Harry has unleashed a stream of sass on him that will be preserved on Tumblr reblogs until the end of time.

"You have your mother's eyes."

This one made me sad a little bit, because it was handled so beautifully in the book. Instead of saying this in his final moments, in the book Snape says to Harry, "Look at me." You have no context and are left feeling a little haunted and confused by it — only after Harry takes Snape's memories to the Pensieve and you see that he was desperately in love with Lily do you have a chance to slowly and heartbreakingly realize the implications of Snape's last request. Of course, there was literally no way to do this in the movie. I knew the instant I read the book for the first time and understood what it meant that there was no way something that subtle would translate into film. Bless Alan Rickman for making this as haunting as it was on screen.

Book version: "Harry, did you put your name in the Goblet of Fire?" he asked calmly.

THIS IS WHY WE CAN'T HAVE NICE THINGS.

Of course, none of this really matters, because the Best Line In All Of Harry Potter, Past, Present, Future and In Perpetuity, was preserved so gloriously that every other line just needs to bow the hell down right now.

If your theater didn't erupt into screaming cheers right after this happened then your theater was full of UNCOOL PEOPLE.