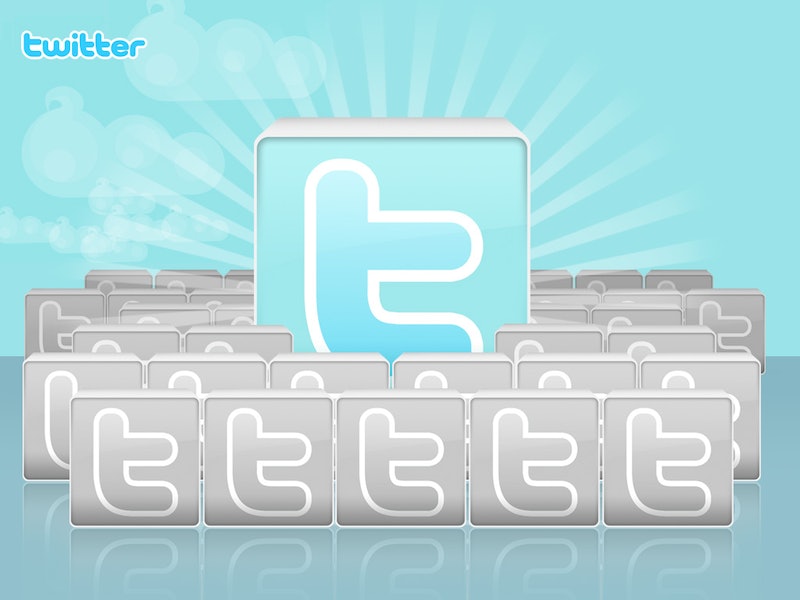 Everyone find something to hang on to, because Twitter might be changing to a 10,000-character limit. Nearly since its inception a decade ago, the social media site has imposed a 140-character limit, causing us 2 frqntly type in abbrvs. However, the company is looking to reinvigorate the platform and attract users, having flatlined at around 300 million tweeters. To put things into perspective, Facebook has more than one billion daily active users on average. What's more, Facebook has undoubtedly undergone more facelifts and upgrades than most, if not all, of the social media platforms, keeping it current and new to look at. How's any other platform to compete?

Here's the plan, which could potentially launch later this quarter, according to Re/Code: Twitter is considering altering tweets so that they'll still only show 140 characters; but, you'll also be able to click the shorter tweet to expand it and read up to 10,000 characters total. This would completely alter the point of the platform, which has always served the purpose of being brief, fast, and concise. 10,000 characters would turn that mode of operation on its head. This would be a very, very large tweet. How large? This large:

The 140-character limit for direct messages was removed in August of 2015, so to some, this change isn't that big of a surprise. And with the format they're considering — still only showing 140 characters in your newsfeed — you won't notice a huge change to your feed. But tweeter beware: If you click to read more, you might encounter a whole mess of words.

Concerns have already popped up, like the insane amount of spam that could arise due to the ability to tweet much longer messages. For this reason, some are wondering if Twitter should maybe consider limiting how many users can be mentioned in a single tweet.

This certainly speaks volumes of Twitter and its team, proving that they're willing to go to great lengths to better appeal to the audiences. What do you think of these new plans?

UPDATE: On Tuesday night, Twitter co-founder Jack Dorsey tweeted a statement about where the social media platform might go in the future; here's what he had to say:

It's not exactly confirmation, but Twitter is clearly continuing to add new features as time rolls on. That's only to expected; evolution is a part of life.

But I'm still curious about whether the raised character limit will come to pass.

More like this
Ashamed Of Your Screen Time Stats? Here's How To Change That
By Alexis Morillo
11 Super Bowl Instagram Captions To Use On Game Day — Even If You Don’t Like Sports
By Alexis Morillo
25 Galentine's Day Games To Play On Zoom With Your Long-Distance Besties
By Mia Mercado
Everything You Need To Know About The Samsung Galaxy S23 Ultra’s New Camera
By Alexis Morillo
Get Even More From Bustle — Sign Up For The Newsletter
From hair trends to relationship advice, our daily newsletter has everything you need to sound like a person who’s on TikTok, even if you aren’t.