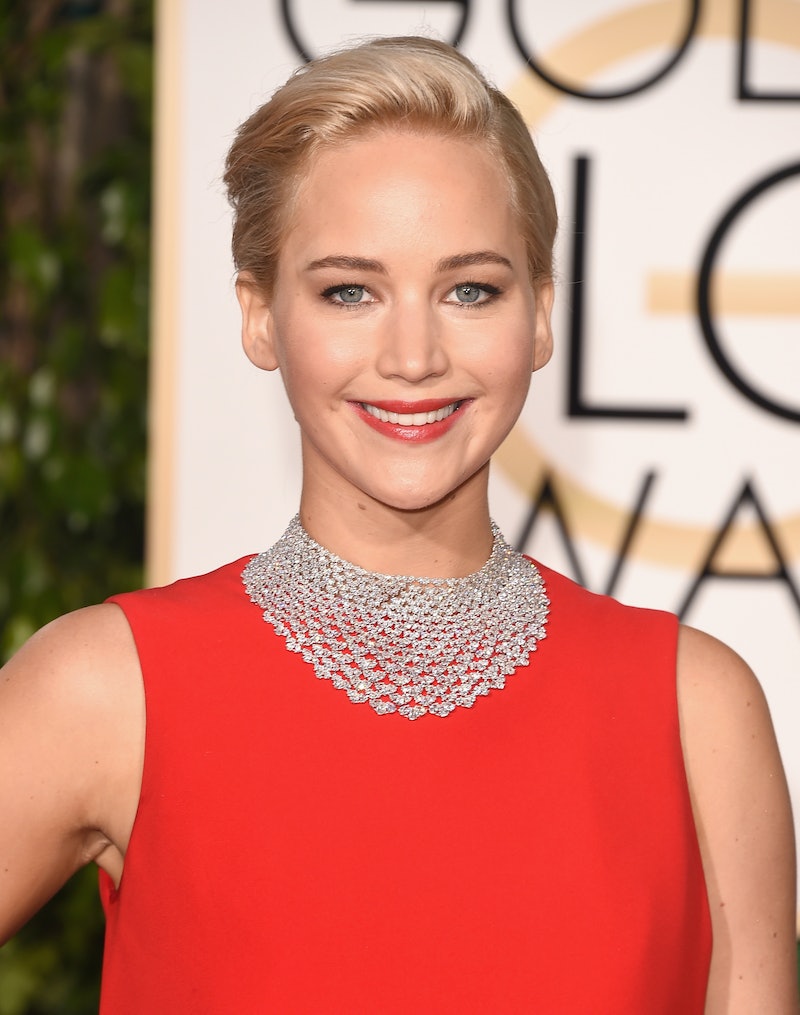 2015 featured a huge amount of great female performances in film, from Saoirse Ronan in Brooklyn to Brie Larson in Room to Cate Blanchett in Carol — and that's just the dramatic side. On the comedy end, it seemed like every great female comedic actor, from Tina Fey to Greta Gerwig, gave can't-miss performances, but sadly, only five of them could earn spots in the Golden Globes' Best Performance by an Actress in a Motion Picture — Musical or Comedy category. And, on Sunday night, a winner was crowned; Jennifer Lawrence beat out Amy Schumer, Maggie Smith, Melissa McCarthy, and Lily Tomlin to take home the honor. The winner was clearly surprised herself, as J.Law's Golden Globe speech was a sweet, heartfelt tribute to the people she felt thankful for and the accomplishments they helped her make.

For many, Lawrence's win might come as a big shock, as while she's a beloved star, it's hard to imagine anyone beating current It Girl Amy Schumer for a top prize. Yet it's clear to anyone who saw Lawrence in Joy or her other films that the Globe is well-deserved. Lawrence has had an amazing year, and has proven that she's one of Hollywood's greatest talents. It's hard to imagine that there's anyone out there who wasn't rooting for her to take home the award on Sunday.

Or for her to give one hell of a speech when she got it. Accepting the prize, Lawrence primarily thanked David O. Russell, her date for the evening. "Every time I'm up here it's because of you," she said. "Thank you for choosing me, thank you for your brilliance, thank you for teaching me so much professionally, personally." But the best part came at the very end, when, leaving the stage, Lawrence quickly added, "David, I love you, I want us to be buried next to each other, I really do."

Say what? Now that's a close friendship. Then again, Lawrence does have Russell, her Golden Globes date for the night, to thank for much of her career; it's no wonder she wants to plan out the rest of her life alongside him. Congrats, J.Law!