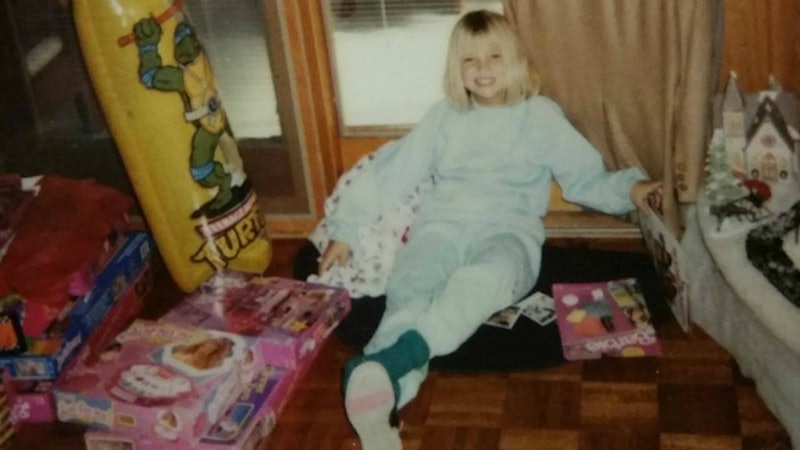 Having enjoyed some of my most formative years in the '90s, there is no shortage of fond memories to pull from when discussing the decade. But, if you're anything like me, there is another topic that provides seemingly endless material for fodder: Problems you had with your siblings in the '90s. After all, every rose has its thorns, and the thorn in every '90s kid's side was a sibling who wouldn't keep her hands off my gosh darn Delia*s catalog. Er, hypothetically speaking, that is.

Who could blame them, I suppose? There was such a wealth of wonderful (albeit curiously dangerous) toys, super cool accessories, and now comically outdated technology at our disposal in the '90s — a bit of sibling tension was to be expected. Still, that was of little solace at the time. Studies have shown that kids spend more time with their siblings than with anybody else, and this was especially true in the case of my siblings and me. When you grow up in a house out in the country on the outskirts of a small town, you sometimes have little choice but to rely on your siblings for entertainment. Naturally, skirmishes ensued. Buttons were pressed. In all likelihood, "Whatever!"s and "As if"s flew about haphazardly.

And, well, now seems as good of a time as any to air those grievances. So let's take a look at some of the problems many of us had with our siblings back in the '90s.

1. They were alarmingly good at taking bad pics

Older siblings in particular had a special knack for snapping pictures of all of the less than fortunate fashion moments and other similarly embarrassing situations you would prefer not be immortalized for all time in film, thank you for very much. 'Cause it's always fun seeing those Polaroids pop up on social media of you rocking your all too frequent blue eye shadow, mock turtleneck and windbreaker combo, right? (Or, in the case of the picture of me, above, that my brother so lovingly shared with the world on Facebook a few years ago, the irresistible pairing of a powder blue sweatsuit and teal scrunch socks.) As my '90s self would say, "NOT."

2. They interfered with your Internet activities

What's girl to do when she only has an hour of time surfing the wonderful new world of the interwebz, and her little sister cannot seem to stay off the phone? Dial-up connections meant that the Internet would be disconnected anytime someone used the phone line, leaving precious little time for siblings hoping to squeeze in some QT on AIM — you know, once you factor in that reconnecting shaved roughly three minutes off your life every.single.time.

3. They never grasped the concept of your mail

Your Delia*s catalog? Taken. Your Alloy catalog? Pilfered. The last five CDs you ordered from BMG? Vanished without a trace. And don't even get me started on the glorious collection of shirtless lacrosse players that was the A& F catalog. Despite being addressed specifically to you, no mail was off limits to the prying eyes of siblings in the '90s. Not cool, little sis. Not cool. And, for the record, stealing someone else's mail is kind of illegal.

4. They wrecked all your CDs

CDs were a big deal back in the day. I mean, some of us started off with mere cassette tapes, so those gleaming circles filled with our favorite music were a huge upgrade. But, you know, it's hard to angst out to Alanis Morissette when the CD in your Discman is so scratched up the song sounds like a remix. Jeez! Plus, you're pretty sure your big brother was the person responsible for telling you that spitting on the back of scratched CDs and rubbing it in would fix them — which was undoubtedly a huge joke you were clearly not privy to until much later in life.

From listening in on the other line as you told your BFF every mortifying detail of your day to cutting in and insisting it was their turn, your siblings phone etiquette in the '90s left much to be desired. The worst, of course, was when they burst into your room and yelled something loud and obnoxious at the precise moment your crush answered your phone call ... after you went through all the trouble of dialing *69 so you could remain anonymous. (What? Like you never called your crush 10 times a day and hung up when he said hello?)

6. They roasted your musical sensibilities

If you were lucky enough to have more than one sibling, like I do, you understand the infuriating dichotomy of sibling interference in regards to your favorite '90s music. One sibling shared your taste in music, resulting in snatched and subsequently scratched CDs. The other sibling tortured you endlessly over your taste in music, making fun of your abiding love for boy bands and Britney Spears. As if listening to Primus' "Pork Soda" on repeat was any better, bro.

7. They ruined your odds of becoming filthy rich

Despite your best efforts to keep your collectibles in their boxes — knowing full well they could one day be your ticket to extreme fortune — you emerged from the '90s with nary a tag or original packaging in tow. Few things filled your siblings' heart with more joy than roughing up your mint condition Beanie Babies or bowling with your still-boxed-up Barbies. For all your know, you could have been a trillionaire by now if only you'd been able to sell those classic nostalgia items NIBWT (aka "new in box with tags"). *Sigh.*

More like this
David Schwimmer Doesn't Remember This Classic 'Friends' Episode
By Sam Ramsden
‘90s Streetwear Brands That Are Making A Major Comeback
By Dominique Norman
Hayden Panettiere Will Return For 'Scream 6': "We F*cking Won, Scream Fam"
By Jack Irvin and Jake Viswanath
Kim Cattrall Spilled All The Tea About Not Being In The 'Sex And The City' Reboot
By Radhika Menon
Get Even More From Bustle — Sign Up For The Newsletter