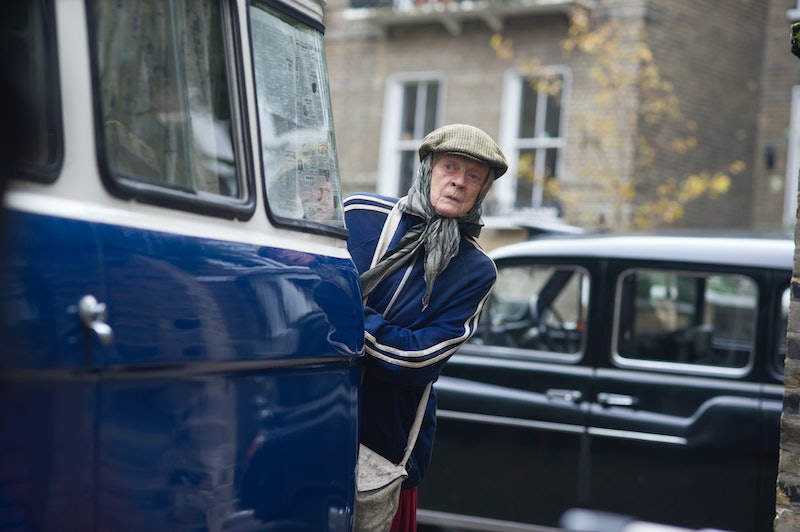 This nominations in the Comedy categories at this year's Golden Globe awards are an interesting bunch. In the Best Picture — Musical or Comedy field, you have one sci-fi action thriller (The Martian), two high-profile dramedies (The Big Short, Joy) and only two straightforward laugh-fests (Spy, Trainwreck). The confusion continues in the Acting fields, which include such well-known funnypeople as Melissa McCarthy, Amy Schumer, and... Dame Maggie Smith? Yes, Professor McGonagall herself is nominated for Best Actress in a Musical or Comedy for The Lady In The Van. But unlike The Martian or Trainwreck, chances are high you haven't even heard of — let alone seen — this little British comedy. So what is The Lady In The Van about?

The Lady In The Van was helmed by acclaimed English theatre director Nicholas Hytner (whose relatively brief film resumé includes The Madness Of King George and The Crucible) and was written by multi-hyphenate actor-slash-author-slash-playwright-slash-screenwriter Alan Bennett (who also penned the Tony-winning play The History Boys). The film is an adaptation of the play by the same name that Hytner and Bennett previously collaborated on for its original West End production in 1999.

Smith plays Mary Shepherd, a role she originated in the 1999 stage version and reprises here 16 years later. Miss Mary is an eccentric homeless woman who one day decides to park her van in a London man's driveway — and then proceeds to stay there for the next 15 years. Over the course of the film, her reluctant neighbor gets to know her better and uncovers the lady's checkered past, including stints as both a nun and a concert pianist.

If that name sounds familiar, it should: as we discussed above, Alan Bennett is the man who wrote the movie and the play it was based on. In fact, The Lady In The Van is an autobiography. Mary Shepherd was a very real person and she actually parked her van in playwright Alan Bennett's driveway for 15 years, from 1974-'89. According to an interview with The Guardian, the story began as a series of Bennett's diary entries, which he published in the London Review Of Books following Shepherd's death, before turning them into a play and now the story's ultimate incarnation as a feature film.

Even though Bennett is a main character in his own movie, the author doesn't glorify his role in Mary Shepherd's life. "It wasn’t, at the time, a humanitarian gesture," he told The Guardian. "I worked at the front window. There were so many incidents when she was not actually physically roughed up, but people banged on the side of the van, hoping to get her out and waving her stick, that I always had one eye on her and it stopped me working. Bringing her into the drive was a way of getting rid of that and enabling me to find a way to work. In retrospect, it might seem as though it was humanitarian, but the larger part was pure selfishness."

At least Bennett's self-professed "selfishness" resulted in Shepherd's life being immortalized forever in this film that has been seen and lauded by many — and will by even more, hopefully, now that Maggie Smith's Golden Globe nomination has earned The Lady In The Van even more attention.