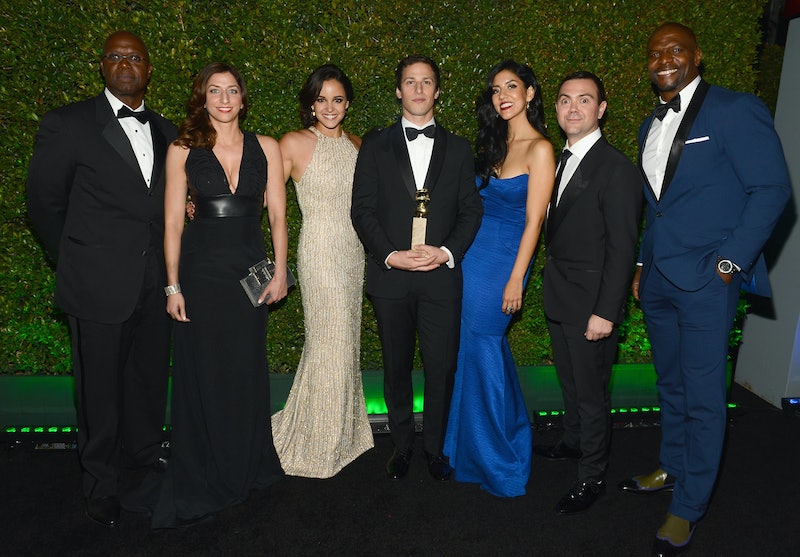 It's no surprise to us that Brooklyn Nine-Nine did well at the Golden Globes. Andy Samberg and the gang have propelled this silly cop comedy into the stars by showing that they're not afraid of diversity, working hard for a joke, or including strong female characters. Since they have gained so much popularity lately, a spinoff seems natural. CSI and Law and Order introduced us to cop show spinoffs, and we've loved them ever since. We are a little surprised that Brooklyn Nine-Nine: LA SVU will be headed by Steve Carell, though. And we're even more surprised to see Rashida Jones following him into copycat territory.

While there seems to be a lot of excitement surrounding Carell's new project, aptly called Tribeca, few people want to call it what it is: an LA spoof on a Brooklyn spoof of New York cop procedurals.

Aside from signing on Rashida Jones for the pilot, Carell has been pretty tight-lipped about the details. Even the description of Tribeca sounds convoluted and derivative, as it desperately tries to avoid the words "Samberg" and "Brooklyn":

"The single-camera comedy explores an eccentric but brilliant group of people who investigate crime, reveal way too much personal information and refuse to rest until justice has been served … sort of." What Golden Globe-winning FOX comedy does that sound like?

To be fair to Carell, Brooklyn Nine-Nine would not be able to pull off the crazy jokes and hilarious pranks if The Office had not introduced a new style of absurd situational comedy to the US. The Office gave us the "let's just sit around at work and not do work" set-up, which Andy Samberg often combines with buddy cop jokes and actual policework.

But before we give Steve Carell too much credit, let's all remember that The Office comes from the UK. So, really, Steve is just up to his old comedy-copying tricks again.

More like this
What Does Michael Peterson’s Family Think Of 'The Staircase'?
By Arya Roshanian
Everything To Know About ‘The Handmaid’s Tale’ Season 5
By Amanda Whiting
'Stranger Things 4' Filmed At A 100-Year-Old Lithuanian Prison
By Kadin Burnett
The 'Grey’s Anatomy' Season 18 Finale Might Have Had A Sneaky April Easter Egg
By Grace Wehniainen
Get Even More From Bustle — Sign Up For The Newsletter