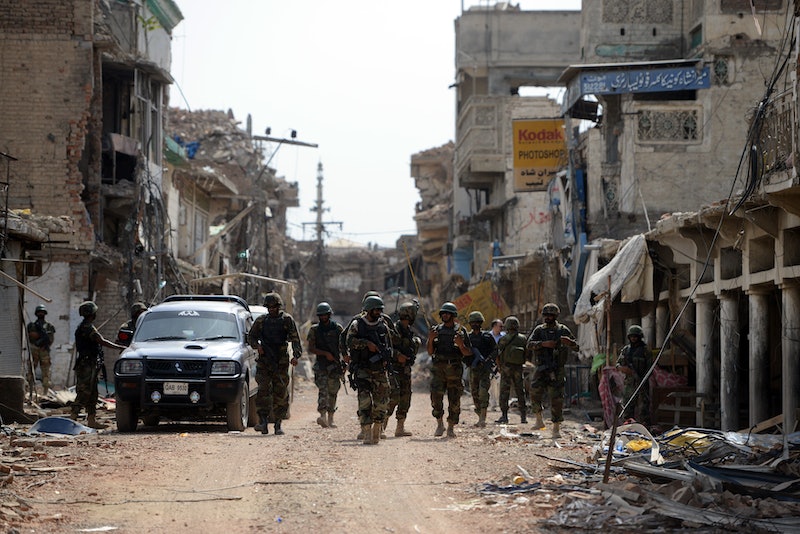 The fourth episode of Serial details the conditions of two men — Bowe Bergdahl and and David Rohde— who share one very important thing in common. Each were taken prisoner by the Taliban's Haqqani wing, but neither have met face-to-face. As host Sarah Koenig stated, their periods of captivity never overlapped. Even so, Rhode tells Koenig that he feels a connection with Bergdahl and is sympathetic of the harsher conditions he had to endure.

Although similar in some ways, Rohde's and Bergdahl's experiences differ greatly. In short, Bowe Bergdahl had it worse. Koenig makes it clear in the beginning of the episode that the comparison is not meant to inspire competition between the captives' stories — instead, it allows the gaps to be filled. Because he experienced less restrictions on his freedom, Rohde was able to answer the questions Bergdahl couldn't.

Rohde, an investigative journalist for The New York Times, was captured by the Haqqani along with his interpreter and driver in Afghanistan in 2008. Unlike Bergdahl, he was a civilian and not nearly as valuable to the Haqqanis as the Army Sergeant would be in the upcoming months. Rohde was also well-versed in the region's culture and in Islam. This previous knowledge helped him appear as more human to his captors, with whom he was able to converse.

Additionally, if he didn't understand something, his interpreter was there to assist in translating. Little communication gaps existed between captor and captive. Even still, Rohde, like Bergdahl, was considered a non-believer and impure. But he received something Bergdahl didn't — sympathy. He recalls an elder sharing bread with him and telling the younger men that he, like them, is a "child of God." His relative freedom during his time spent with the Taliban allowed him to observe the atmosphere around him along with how the Taliban operated. Thus, he is able to describe the Taliban compound near Miranshah, where Bergdahl would eventually be held as well, better than Bergdahl himself.

There's tons of Toyota station wagons that people drive on their own and also serve as taxis. And it became clear in those first few hours, and then days and weeks, that this was a Taliban mini state that functioned openly, that repaired roads and ran schools, and had some sort of basic form of health care. It wasn't this completely backward area, as it is usually described.

Seven months later, Rohde and one of his fellow captives escaped to a nearby Pakistani military base where they were rescued on June 20, 2009. Just ten days later, the Taliban found a new captive and they weren't going to let him get away as easily. Koenig explains the remarkable, unique of Bergdahl's capture, citing his isolation as the defining factor and it occurs on two separate levels.

Unlike Rohde, who was captured and detained alongside two colleagues, Bergdahl was completely alone. On top of being isolated as both the only prisoner and the only American, Bergdahl was isolated from the outside world. He spent years inside of either a six-foot-wide cage or a small room that, whether lit up or pitch black, always blocked his view of the external conditions. Koenig cites a few theories as to why Bergdahl experienced harsher treatment and greater isolation than Rohde.

Firstly, Bergdahl was a soldier — and even worse, an infidel — invading the region and killing Afghans. Rohde, on the other hand, was an innocent civilian. Secondly, Rohde had a better understanding of the culture, religion, and language, making him seem less alien than the invader. Lastly, Bergdahl had already attempted escape and failed early in his captivity, putting his captors on guard. Rohde had just escaped less than two weeks prior and the Taliban wasn't going to let Bergdahl do the same. Koenig says that if Bergdahl wasn't believed to be a deserter, his survival would be a success story for the American military.

There's no one else in the recent history of the army with a story like that.

Terrence Russell, Bergdahl's principal debriefer, went on to compare Bergdahl's survival to that of a POW during the Vietnam War.

[Sergeant Bergdahl's] experience ... ranks at the same echelon of the most horrible conditions of captivity that we've seen in the last 60 years.

That being said, the conditions under which Bergdahl maintained sanity are even more astounding, regardless of whether he deserted his unit or not.