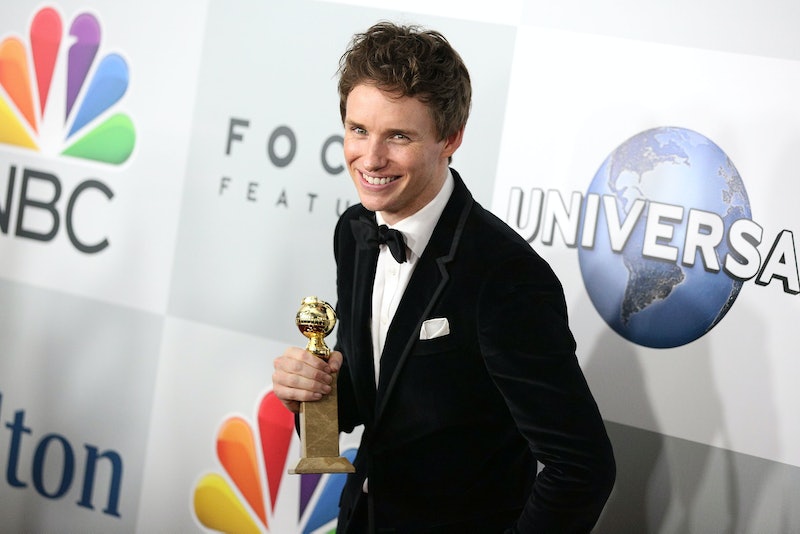 Award shows aren't just carried by the weight of the host, but the success of the show is also reliant on who is called to the stage to present as the night progresses. As pairs of famous faces make their way to the microphone during Sunday, January 10, presentation of the 73rd Annual Golden Globe Awards, we can expect loads of corny jokes, flashbacks from the previous year, and... last year's Golden Globes? With the first batch of 2016 Golden Globe presenters announced, we see a whole group of familiar faces from the year before — and less diversity than the nominees themselves.

First, let me break this down for you. The presenters scheduled for the Golden Globes so far include the following: Jaimie Alexander, Patricia Arquette, Mel Gibson, Amber Heard, Bryce Dallas Howard, Kate Hudson, Helen Mirren, Julianne Moore, Eddie Redmayne, Kurt Russell, Jim Carrey, Jamie Foxx, J.K. Simmons, Channing Tatum, and Olivia Wilde. Lots of familiar faces, extreme talents, and people who happened to take the 2015 Golden Globes stage as well. As usual with award shows, the winners of the year before usually appear to hand out awards to those in which will be taking home the next top titles.

Out of the 15 presenters announced for the 2016 Golden Globes, four of them are previous winners from last year's major categories — really no surprise there. However, it's the choices of non-winners that seem to be the most shocking to me. There's not only a sheer lack of television actors and actresses on the list, but the presenters overall happen to be overwhelmingly white.

Let's be clear here: I'm not denying the talent or capabilities of any of the talents who will be taking the stage to present an award, but is it really a reflection of what we've seen this past year? I was just seriously hoping there would be some kind of improvement after last year's lack of diversity. Personally, I love Jamie Alexander, but with all the diversity of 2015 television, why is she one of so many white actors taking the stage as a presenter? The only presenters who make complete sense to me are Bryce Dallas Howard — because she did run from dinosaurs in heels after all — and Jamie Foxx — a black former Golden Globes winner who's career has only been on the up-and-up.

However, considering the fact that Kurt Russell was the supporting character in The Hateful Eight, why is he among the presenters? They could've easily gone with Samuel L. Jackson, the star of the film, considering the overall lack of diversity in presenters. And what about Kate Hudson? While it's not a known fact that presenters are supposed to reflect the past year, it does seem kind of odd to me that she would be chosen to present when she hasn't really done anything as of recent. A better choice would have been Gina Rodriguez, who won last year and has yet to find her spot on the Golden Globes stage this time around, or Lupita Nyong'o, whose role in Star Wars: The Force Awakens helped this 12 Years A Slave star prove that she's definitely not going to be a one-award-season wonder.