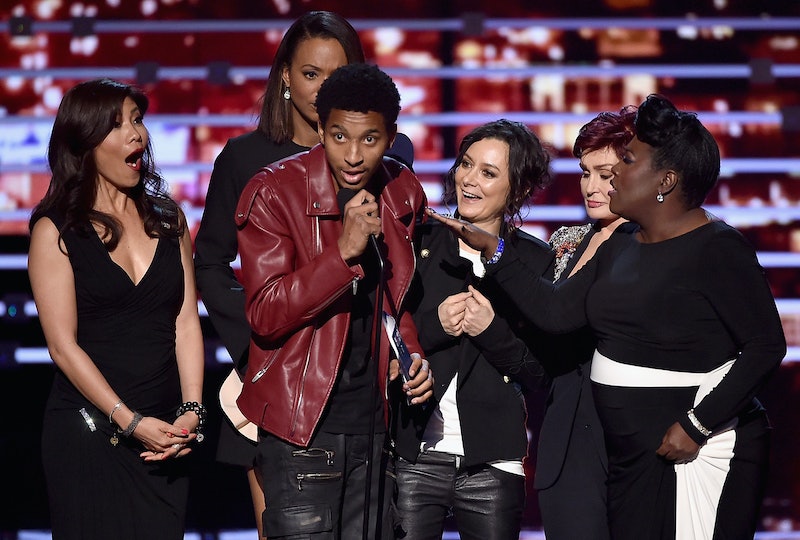 On Wednesday night, there was a Kanye West MTV Video Music Awards moment at the 2016 People's Choice Awards. Quickly, the award show went from snoozeville to "whoa, what the heck is happening?" During the broadcast, a random dude crashed the People's Choice Awards stage, while the ladies from CBS' The Talk were accepting their award for Favorite Daytime Hosting Team. He interrupted Sara Gilbert and started spewing off something about rappers Kanye West and Kevin Gates, and was then shooed away by both Sharon Osbourne (she actually tried to kick him) and Sheryl Underwood. Anyways, there is finally a name to put with the face. You can now start calling the PCA's stage crasher Zacari Nicasio, aka ZacZeta.

The Hollywood Reporter spoke to him following the show and he said, "I had to shout out who I look up to: Kanye West and Kevin Gates. I came here to do this tonight. I could honestly care less about what was going to happen." He added that he needed "to tell everybody who [he] was" at the PCA's. For those wondering, the LAPD did handcuff him inside the PCA's, but released him soon after.

This might come as a surprise to you (not really), but he is no stranger to showing up at events uninvited. More or less, ZacZeta is a professional party crasher. When he isn't busy working on his "rapping career," he sneaks into places, like the PCA's and Kris Jenner's 60th birthday party. That's right, he snuck into the Keeping Up With the Kardashians star's party. Don't the Kardashians have major security? They must have been slacking on the job that night.

TMZ even has an interview with Nicasio, who is seen onstage singing to Jenner, standing near his idol West, and giving no details whatsoever about how he actually got into the party. Clearly, it was a great night for him as he wrote on Twitter, "Happy Birthday Kris, You were Beyond Beautiful just wanted to congratulate you on your 60th birthday it was Magical."

Based on his Instagram, he even attended parties for both The Hunger Games and Star Wars. I'm pretty sure he didn't receive an invitation to these high-profile events...

If that isn't enough, apparently ZacZeta also knows Drake's dad? Huh? OK. Well, I don't think they're BFFs or anything like that, but upon crashing another after party (this time it was at the American Music Awards), he snapped a picture with Drake's dad, Dennis Graham.

This guy is seriously everywhere. How does one even get into crashing? I know he's trying to "promote" himself and his album, but come on. It's pretty annoying, and I know I'd be pretty irritated if someone I didn't know showed up at my birthday party. That said, how he manages to get into these events, well, I give him some credit for sneaking in without question.

All this publicity might be bad for Nicasio, though. Now that he's made headlines, he is probably on everyone's radar, especially for red carpets, award shows, after parties, and anything Kardashian-related. I have a feeling crashing just became much more difficult for the rapper. Here's hoping he doesn't pop up at Sunday's Golden Globes.

With that, I leave ZacZeta with this tip: Get rid of that red jacket you wear everywhere, because it will only give you away.