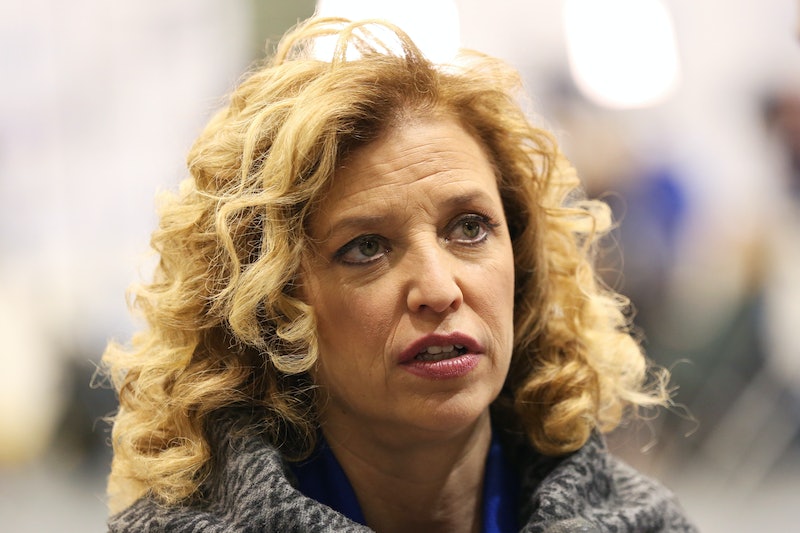 Democratic National Committee Chair Debbie Wasserman Schultz is getting a lot of attention on Twitter right now for her comments asserting that young women are "complacent," having only lived in a post-Roe v. Wade era. Unsurprisingly, feedback from young feminists has not been positive. In fact, many young women are taking to Twitter to voice their opposition to her criticism under the hashtag #DearDebbie.

How did this all come about? In an interview with New York Times Magazine this week, Schultz was asked whether she notices "a difference in young women and women our age in their excitement for Hillary Clinton? Is there a generational divide?" In response, Schultz said that she she sees "a complacency among the generation of young women whose entire lives have been lived after Roe v. Wade was decided." Ouch. Abortion is always a pretty heavy topic in itself, but when you imply that young women aren't active or engaged enough in women's issues, people are likely to get pretty heated. The hashtag emerged as a response to this comment, with many young women showing that they're anything but complacent when it comes to their reproductive rights.

This is not the first time young women have used Twitter to get their message across when it comes to abortion. In September of 2015, many brave women shared their abortion stories with the hashtag #ShoutYourAbortion as a way to raise awareness and help end the stigma against abortion. Prior to that, in 2013, the hashtag #StandWithWendy garnered huge attention in response to, and in support of, Texas State Representative Wendy Davis in her 13 hour abortion bill filibuster.

Of course, it's important to put the abortion discussion in a bit of context. While Schultz is technically correct (young women today, indeed, have never known a world prior to Roe v. Wade), her statement reads as offensive for a few reasons. First, young women today are active — and often intersectional — feminists. Young women are active in groups like Advocates for Youth, which aim to "start a new conversation about abortion," while others volunteer their time at organizations like Planned Parenthood (sometimes at risk of their own safety) and as interns for Democratic senators.

Speaking of volunteering, that brings me to my next point: Schultz's comment rings painfully out of touch with the experience of young women and the obstacles many of us face today. It's hard to devote time to activism when it's on an unpaid or volunteer basis, even if it's a cause we believe in. And no, it's not because young women are lazy or complacent; it's because our generation has crippling student debt, rising housing costs, and sky-high stress levels, not all of which affected older generations in such an overwhelming and relentless sweep. But we do it anyway. We know how much our reproductive rights — as well as all our other rights — matter, and we are more than willing to fight for them, whether we were alive before Roe v. Wade or not.

Like the tweet above smartly points out, at its root, feminism isn't about women tearing other women down, and it's certainly not a race or challenge to see who can be the "best" feminist. While Schultz certainly may have spoken with the best intentions, her words definitely sting — which is where the #DearDebbie hashtag on Twitter comes in. Hopefully Schultz will take this as an opportunity to explore the major ways young women are protecting abortion rights in our country.