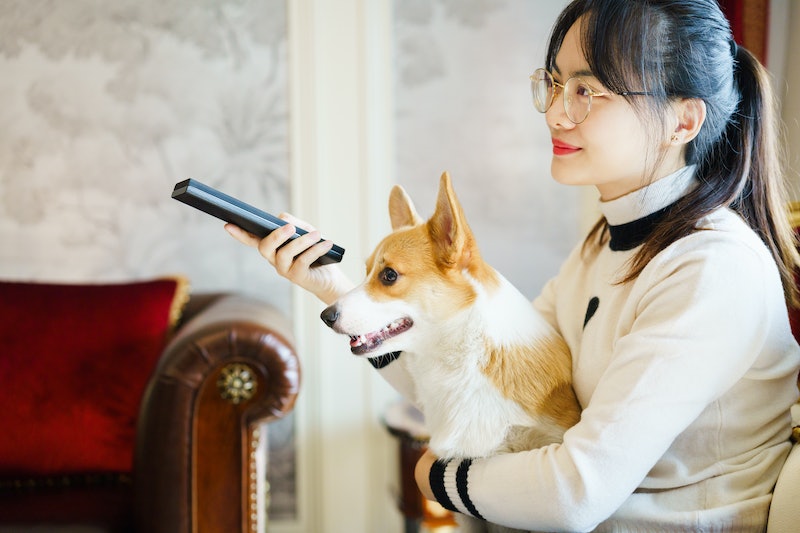 Everyone loves spending a night watching TV — it's relaxing, it's fun, it gives you something to talk about with friends — I could go on. But, unfortunately, it is possible to watch too much TV. You may even find yourself feeling addicted. From little things, like missing a night out out with friends, to larger problems, like totally tuning out your emotions, it's impossible to say that TV doesn't affect other areas of your life.

Now I'm not a doctor, but I do think there's some kind of correlation between watching a lot of TV and having a deeper problem going on. I certainly glaze over in front of Netflix whenever I'm feeling depressed, as it helps me tune out bad feelings and push them off for another day. And I'm sure I'm not the only one, which is why I think it's important to look at why you're watching so much TV.

In an article about his addiction to television, blogger and life coach Michael D. Pollack said, "... my life was a mess, my self-esteem was shot, and while TV may have provided a short-term escape from that reality, it ultimately kept me locked within it. Said another way, instead of using my time and energy to deal with my problems and improve my life, I was wasting it on television."

If this sounds like you, Pollack suggested logging the hours you watch TV, finding alternatives, and developing a mission for your life. Easier said than done, of course, but totally worth it in the end. Of course, following your favorite shows doesn't mean you're depressed. Maybe you just like TV, and that's OK! Do, however, keep it in check.

Below are some signs — both serious and not so serious — that you're totally addicted to TV.

1. You Totally Lose It While Waiting For The Next Episode

This is how I feel when The Walking Dead ends on its usual cliff hanger and I have to wait until the following Sunday to find out if my new favorite character is still alive. (And don't even get me started on the withdrawal I feel at the mid-season finale.) Just like with a good book, it can be hard to stop thinking about a character that really affects you. It's totally normal! But also a sign that you're kinda, sorta a little addicted. If you find yourself pining away between episodes, make sure you fill up your time with active, non-TV related things. Enjoy your characters and your plots, but don't let it eat you up throughout the week.

2. Netflix Is Constantly Asking If You Want To "Continue Watching"

This used to be a barometer of a marathon, but it seems like Netflix has gotten a little hasty with popping the "Continue Watching?" question. I think it used to let about five episodes pass before asking. Now it seems like it asks after only two. Two episodes does not a marathon make, Netflix! Still, it's a good idea to take this as a hint that maybe you should go do something else. Limit yourself to one or two episodes, and save the binges for special occasions.

We've all felt that rush of joy brought on by canceling plans in favor of staying home to watch CSI reruns. Staying in is a relaxing and often necessary thing to do. But if your favorite shows start to trump other areas of your life — your relationship, your school work, your friends — then you may want to reevaluate your priorities. Keep a balance between nights in with your favorite TV pals, and going out with your actual pals.

4. TV Is How You Start And End Your Day

You can be "addicted" to TV, and then you can be really addicted to TV. It's a sign that you're watching too much television when you flip it on the instant you wake up, or fall asleep to it at night (or both). If this sounds like you, try to let silence back into your life. Skip the blaring sound of TV commercials in the morning and start your day off with peace and quiet. And at night, fall asleep while reading a book, instead of in the blue glow of your latest crime drama obsession. I bet you'll feel much more calm and in touch with yourself.

5. You Use TV To Cover Up Other Problems

Like I said above, many of us use TV as a way to cover up depression, or loneliness, or a horrid case of procrastination. After all, it's so much easier to sit on the couch than it is to face a problem, or look for a new job, or go out and meet new people. If you can't be alone with your thoughts, try to figure out what's bothering you instead of drowning it all out with constant noise. Limit your TV time to an hour a night. See what kind of emotions are dredged up, and then do what you have to do to manage your feelings, like talking to a friend or a therapist.

6. Your Non-TV Hobbies Are Seriously Lacking

I love binging Netflix, obsessing over TV characters, and occasionally partaking in horrible reality shows just as much as everyone else. But I try to balance it with non-screen pursuits. After all, life is too short to spend it in someone else's reality. You don't want to be 80-years-old and saying "I'm so glad I made it through every episode of KUWTK." Make sure that you create your own life off the couch and away from the TV.

7. It's Affecting Your Sleeping Schedule

TV can totally mess with your sleep cycle. That's because watching the old "tube" has the opposite effect you're probably going for when you climb into bed and flip on a show. Instead of calming you down, the stimulation and the glow of the screen can actually be keeping you awake. According to an article by Heather Hatfield on WebMD.com, "As your brain revs up, its electrical activity increases and neurons start to race — the exact opposite of what should be happening before sleep." So if you want to get some proper rest, don't rely on TV to help you get there. Instead, turn everything off an hour before bed, and get some real shut eye in the dark.

There's nothing wrong with watching TV, but don't let it control your life. Take a break from it all if you find yourself turning to TV too often.