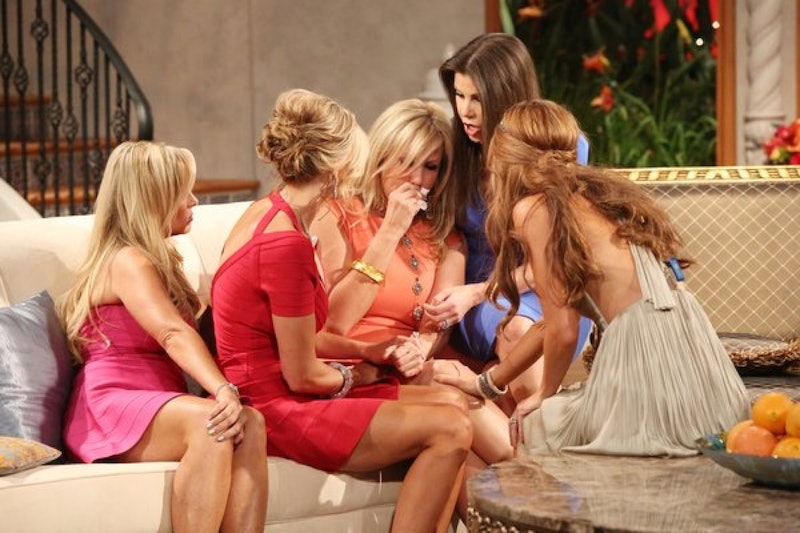 I am a television addict, through and through. I watch so much television that I feel qualified to tell people how to balance it all and still have a functional life. I watch so much television that when I work out my budget, my cable bill has equal weight with my grocery and electricity bills. As Wife Swap's King Curtis once said of his precious chicken nuggets, television is like my family. Unfortunately, in the last month, I've become allergic to one family member — reality television — and I'm not quite sure what to do with myself.

Resisting reality television isn't uncommon, and a few years ago as a young journalism school student, I felt compelled to resist the genre entirely throughout my early 20s. But I couldn't. It began with The Real World — what the reality television snob might call "canon" — and when no one was looking, I'd progress a little further and gobble up America's Next Top Model marathons or entire seasons of The Real Housewives of Orange County knowing full well that it's the worst one. When I became a television blogger, I spent many hours and nights covering every last inch of American Idol and Real Housewives nonsense. I even weighed in on the cheap Bravo knock-off Football Wives . I'd found a way to justify my addiction to potato chips for the brain, and it opened up Pandora's box.

Suddenly, it wasn't just Real Housewives that struck my fancy. Any dose of reality could consume me in a matter of seconds. Bring on The Millionaire Matchmaker, Gallery Girls, and Princesses: Long Island. I even caved to the age old reality temptation that is The Bachelor. The more irrational people a network could cram onto the small screen, the better. I wasn't happy until my ears were bleeding from all the shouting that engulfed the final moments of every show from The Jersey Shore to Toddlers & Tiaras.

I found many ways to justify my addiction. I'd use high-brow terms, calling the series an anthropological study of fame and the lengths people will go through to achieve it. I'd marvel at the varying levels of awareness different reality stars had for the affect of cameras being shoved in their faces. I'd swear I was learning something about society and culture by spending hours consuming these empty mental calories and in the summer of 2013, I hit peak reality television dependency.

My addiction was so strong that when I ran out of unseen RHOC, Princesses of Long Island, and Keeping Up With The Kardashians episodes, I turned to the troves of TLC gems on Netflix and quickly blew through Say Yes to the Dress. When I'd exhausted the supply greatly enough to find my way to TLC's Extreme Couponers, a.k.a. 99 Thousand Boxes of Cereal On the Wall, I knew something had gone terribly wrong. I'd gone too far.

I shut it down, buried myself in a pile of books and tried desperately to remind myself that I'd attended an actual university for four years — at least that's what I told myself every time I sent off a massive student loan payment. I'd tell myself my brain was dying, like a lizard some kid needlessly preserved in an air-less mason jar prison. But I missed that inane banter, the rampant cries of "you know what you did, Vicki" and the classic "I didn't come here to make friends" line. I returned like a moth to the flame in Juan-uary, primed and ready for The Bachelor's madness and Real Housewives drama in Beverly Hills.

But the spell had been broken. My disbelief could no longer remain suspended. I couldn't feign interest in the squabble of the week between Kyle Richards and Brandi Glanville. I couldn't force my brain to distinguish one high-pitched wail from another during a raucous dinner party. My eyes wouldn't focus on elaborate evening gowns or Juan Pablo Galavais' soccer moves. I'd accidentally cured myself of my reality television addiction and the sad thing was, I wanted it back.

I vaccinated myself against the one televised mental respite I could rely upon that allowed me the chance to not think about what writers, producers, directors, and actors had done to compose a particularly great scene — the one blind spot in which television was really this magical little phenomenon and not the tireless work of a crew and creative team. Despite knowing that actual people orchestrated reality television, it was the last frontier of seeming televisual entropy.

Since I've unwillingly expelled reality television from my life, any attempt to consume celeb-reality (luckily, American Idol's musical merits still manage to stimulate my brain) sagas have failed spectacularly — like attempting to eat a flavorless meal. On one hand, I know that I should be proud — cleansing oneself of reality television is a sign of maturity, or so I've been told. My brain feels more alive and I've suddenly got more time to read books and magazines. I finally have the ability to make it through every season of Sherlock without losing focus. HBO's needlessly heady True Detective actually makes sense to me.

Kicking traditional trashy reality television has only provided me with beneficial results, but I can't help it. I'll miss you, Keeping Up, Real Housewives, and Top Model. You sure didn't make me smarter, but you were certainly always on.