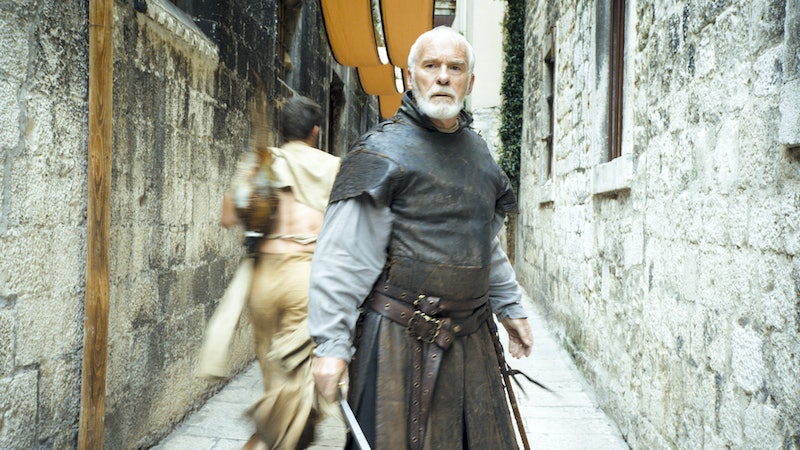 Is 2015 the year that television finally took shocking deaths too far? The modern reign of the Grim Reaper has been increasing every year, starting with broadcast shows like Grey's Anatomy and Lost before being thrown into a veritable frenzy by cable programs like Game Of Thrones and The Walking Dead. It would probably be impossible to make a list of literally every character that perished onscreen (and off) over the course of the past calendar year. But we'll do our best with this list of some of the most TV shocking deaths of 2015.

Sometime this season, showrunners went from killing characters with apparent glee to using our fear of death to craft cheap cliffhangers. Not one, but four shows this year appeared to kill off leading male characters... before it became painfully clear that they would soon be popping up again alive and well. (Yeah, we're talking about you, Game Of Thrones, The Leftovers, True Detective, and The Walking Dead.) The affected characters in the latter two shows have already been resurrected, disqualifying them from entry on this list. (Sorry, Kevin Garvey, Glenn Rhee. Colin Farrell's Ray Velcoro was later killed off for good, but that didn't come as much of a shock to anyone.)

But there were still plenty of deaths that stuck. Here, ranked by shock value, are the 19 TV deaths that fans are likely still mourning this holiday season:

Sure, when the dreamy Lord Commander was stabbed by his mutinous Night's Watch brothers in the Season 5 finale, it sparked a Twitter frenzy among unsuspecting viewers. But it's hard to fully shock when probably over half your audience has read the source material and knew it was coming. Combine that with the fact that we already know he'll be resurrected sometime in Season 6, and this "shocking" death didn't turn out to be so shocking after all.

The bromance between cannibal serial killer and FBI profiler was doomed from the very beginning. But that didn't make watching them tumble over a cliff grasped in each other's arms any less shocking. The fact that the weirdly beautiful murder/suicide came right at the heels of Hannibal's and Will's first kill together — and that tantalizing almost-kiss! — made the scene all the more affecting. The reason this death is ranked so low is simply because we don't actually know if they're dead: if NBC had renewed Hannibal for a fourth season, they obviously would have survived their fall somehow.

Given that this A&E drama is a prequel to Psycho, the fact that Norman Bates killed someone isn't exactly "shocking" in the traditional sense of the word. But watching the troubled young man commit his first onscreen cold-blooded murder was still disturbing — especially because he was imagining himself as his mother, Norma, the entire time. Chilling stuff.

16. Rebecca Sutter, How To Get Away With Murder

Like Bates Motel, the fact that there was a murder on a show with that very word in its title wasn't "shocking," per se. But with all attention focused on the deaths of Lila Stangard and Sam Keating, the killing of misunderstood Rebecca came as a sudden gut-punch in the final moments of the Season 1 finale. As if her actual death wasn't shocking enough, finally getting to witness it happen — and learn who did it — in the Season 2 premiere was even more surprising.

I suppose ABC's Revenge couldn't possibly have ended with both Amanda Clarke and Victoria Grayson alive and well. But the indomitable socialite had survived so much — including at least two previous "deaths" in a plane crash and an explosion — that seeing her gunned down in the series finale was still somehow unexpected. But the real shock was who pulled the trigger: not Amanda, but her father and Victoria's ex-lover, David.

Of course, once she had seen Dorian Gray's supernatural portrait, we knew there was no way the immortal gentleman would let his transgender lover live. But the way he dispatched her with such casual disdain — handing her a glass of wine that turned out to be laced with poison — was supremely upsetting. And the fact that he murdered Angelique after having already discarded her for beautiful young Lily was just the salt in the wound.

So many characters have died throughout six seasons of AMC's zombie drama that the writers now have to work extra hard to make any given death more shocking than the rest. They certainly succeeded with poor Noah, whose death — ripped apart and eaten alive while trapped inside a revolving glass door — was probably one of the most gruesome images ever put to television.

It was always unlikely that all of our protagonists were going to make it out of the grim second season of True Detective. The fact that both Ray Velcoro and Frank Semyon bit in the finale felt more like an inevitability than a surprise. The really shocking death belonged to Taylor Kitsch's closeted cop, who successfully battled his way out a dark tunnel full of special ops forces trying to kill him, only to be shot in the back upon his exit. He didn't even make it to the finale. Tough luck, Paul.

The investigative journalist has been a staple of Marvel comics for so long, working alongside both Daredevil and Spider-Man, that I don't think even the idea of the character dying in the very first season of this superhero show was on anyone's radar. And, yet, when he agreed to help Karen Page pursue her investigation into Wilson Fisk, he found himself on the wrong end of the crime kingpin's fury. Urich's death may have come as a shock, but it certainly upped the stakes of Netflix's Marvel universe.

Before he strangled the life from an innocent woman on a Manhattan rooftop, we already knew that Tyrell Wellick was a dangerous man. But we didn't fully grasp how dangerous — or how increasingly unhinged he was becoming — until an illicit tryst slowly and horribly transformed into murder before our very eyes. Every little detail of the scene, from Sharon's shoe flying off in the struggle to the way the music cut out as Tyrell realized what he'd done, was perfectly calibrated to enhance our distress even further.

Rachel wasn't the first character to kick the bucket on Netflix's political thriller; but the tension surrounding her death was almost unbearable. The long drive out to the desert; her pleading with him to spare her life; his change of heart as he decides to let her live; his second change of heart as he turns around to finish that job; and that jarring image of her bright red hair poking out of the yellow sand as he buries her corpse... We always knew Doug would do anything for Frank, but this cold-blooded killing was still agonizing to watch.

FX's anthology series didn't suffer from a lack of options when it came to bloody death. (Just take a look at this tongue-in-cheek "In Memoriam" video for proof — MAJOR SPOILER ALERT, obvi.) But the most shocking, out-of-nowhere demise belonged to Jeffrey Donovan's insufferable Dodd; we thought Hanzee was coming to his rescue, but after Dodd can't help but insult his henchman in the process, he receives a well-deserved bullet to the brain from his would-be rescuer. Shocking? Yes. Sad? Not at all.

Given that the Season 1 finale was delayed by USA due to the shocking on-air shootings of Alison Parker and Adam Ward, viewers knew going in that something terrible was going to happen. That's the only thing that made this scene sliiightly less shocking than it otherwise would have been. After fsociety brought down Evil Corp, this disgraced exec took the only way out he could see: by committing suicide live on air, with the emotionless camera lingering far longer than the stunned viewers at home probably would have liked.

Given that the character hadn't even reached the spot in the narrative at which his on-the-page analogue started getting point-of-view chapters, viewers were wholly unprepared for the demise of stoic and reliable Barristan The Bold. The fact that the fearsome fighter was taken down by a bunch of cowardly masked hoodlums was just salt in the wound. Of course, his demise paved the way for Tyrion's entrance into Dany's storyline much earlier than the two meet in the books. But that doesn't make this loss any easier to cope with.

Wow, three Mr. Robot deaths in the Top 10. The first season of USA's acclaimed hacker drama was a deadly one, but the most shocking death was that of Elliot's love interest (and drug dealer) Shayla. She was the one thing tying the delusional programmer to a normal life, and her loss — after an entire episode spent trying to get her back from the clutches of Vera — was a serious blow to our protagonist... and to our own emotional well-being, to boot.

Usually when you kill off an important character, you do it in the final moments of an episode, in order to leave viewers gasping from the emotional cliffhanger. So when Coulson's frenemy/love interest was gunned down by Ward in the opening scene of this episode, it left us all reeling in disbelief. Was this a nightmare? A training exercise? A plan that Rosalind was in on somehow? Nope, none of the above. She was just dead. Within the first three minutes of the episode.

The first five episodes of Lifetime's new original series were dark and twisted, to be sure — but nothing could have prepared us for Mary's decision to take her own life, prompted by the emotional manipulations of her own producers, in the season's sixth episode. Her suicide was jarring and tragic, and seriously upped the stakes for the second half of the season, reminding everyone — characters and audience included — that the people the producers of Everlasting were manipulating were just that: people, with very real emotions and insecurities and vulnerabilities... and that every decision could have life-or-death consequences.

Ugh. Poor McDreamy. What else is there left to say about the death of Dr. Derek Shepherd, one half of Grey's Anatomy's central couple and an iconic television character for over a decade? His demise at the hands of inept surgeons was difficult to watch, traumatizing for fans, and a game-changer for the show. This death would have been #1 on the list for sure, if it weren't for one little thing...

...that "little thing" being, of course, the eminently adorable book-loving princess Shireen Baratheon. Even though we sort of saw Stannis' decision to sacrifice his own daughter coming, there was at least a small part of all of us that expected him to change his mind, to call it off. But no. The look of horror on Shireen's face as she realized what was about to happen; Melisandre's expression of perverse delight; Stannis' stoicism in the face of his daughters' screams; and Selyse crumbling at the sight of her daughter's agony... Was there a more horrible moment on television in all of 2015? If so, I'm hard-pressed to think of it at the moment.

Looking back on this list, it's hard to imagine 2016 being much worse when it comes to shocking deaths on television. But, then again, the way things have been going lately, all the TV writers will undoubtedly find a way to one-up themselves again next year, rendering all of us even more of a blubbering mess than we were this year.