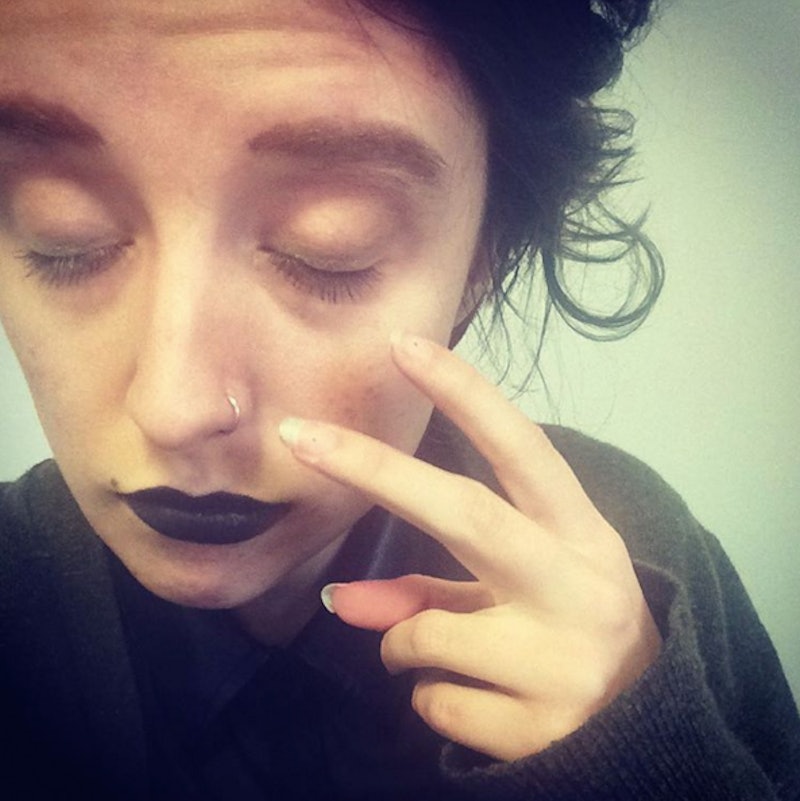 The concept of a "real woman" and what she does and doesn't do is incredibly problematic, while simultaneously being incredibly common in contemporary conversations. It's a tagline that, on paper, fights against a culture in which women are held to high and ridiculously specific expectations. It's seemingly meant to fight against the reality that so many feminine people share the experience of comparing themselves to the airbrushed, thin, white, cis models on the glossy covers of magazines, feeling like they just can't add up no matter how much foundation or contouring are employed in their morning routine. Those sentiments are arguably especially felt by trans and gender nonconforming people, who are told even more regularly that their interpretations of beauty and gender aren't "correct." This reason, above all, is why the "real woman" dialogue is all kinds of wrong. You know, besides the fact that all women are real, whether they are thin, contoured, chubby-cheeked, or otherwise.

Despite many efforts by body positive communities to fight back against the ill-informed "real women have curves" dialogue and others like it, there doesn't seem to be much space for those who are gender nonconforming or who aren't assigned female at birth. When it comes to entering these conversations myself — even when surrounded by welcoming body positive inspirations like Marie Southard Ospina and Mallorie Dunn — I can't help but feel completely out of place.

One of the reasons I gravitate towards concepts of body positivity is because the movement is making room for everyone's bodies and unique take on fashion, beauty, and body image. I admire the way the body positive activists who I know advocate for self love by rejecting the limiting ideas of how society has historically described womanhood openly with their work and speech. These women don't necessarily all fit the mold of mainstream media's idea of white and thin beauty, but they argue that their femininity isn't any less valid because they are fat or non-hetero or WOC.

While these folks are doing important things for cisgender women, I grapple with the question of how to contribute to the conversations of self love as someone who sometimes identifies as feminine, but doesn't ever identify as a woman.

Feminine standards of beauty have the potential to hurt trans and gender nonconforming communities just as much as they do cis women, if not more. And as a non-binary person, I personally feel hurt by these standards on top of feeling left out of the spaces that are trying to dismantle them. So when I hear others around me discuss "the real woman," and speak about ending fat shaming and skinny shaming to abolish any "right way" of being a woman, I feel a Meg-shaped gap in the conversation.

Although I've dealt with a certain measure of weight shaming in my life (softened with the privilege that a straight size body gives me), the first thing that comes to my mind in such situations is my gender "crisis." It reminds me of my struggle to fit a certain mold, and causes me to wonder whether I am "more" of a woman than a man or vice versa. As a non-binary human who has only been out of the closet for about six months, it stirs up questions about my ever-shifting identity — one I'm constantly exploring and understanding more about every day.

Since I don't identify as a woman, but was assigned female at birth, the pressures of performing femininity "the right way" feel extra painful sometimes. I'm often made to feel weird about my hatred for dresses and my distaste for things considered ladylike, like jewelry. But since coming out as genderqueer, I'm equally met with confusion from those closest to me when I wear skirts or lipstick. It's as though I'm no longer entitled to femininity.

I sometimes struggle to figure out who I am when the definitions of femininity and masculinity are so rigid. On days when I'm feeling masculine, I wonder if I'm doing masculinity right as people tell me how "pretty" I am. On days that I feel feminine, I wonder if I look less beautiful or ladylike l because I choose not to shave my legs. And oftentimes, I fear being subjected to judgment or harassment simply because I present androgynously.

For me and for other gender nonconforming people, we need to work on expanding the "real woman" dialogue beyond the cis experience. Transfeminine humans are constantly subjected to violence and harassment for not passing as female, or not performing femininity up to the standards of "the real woman" concept. And if a trans or gender nonconforming person performing femininity does so without the absence of body hair, or with makeup on that is considered to represent alternative beauty standards, they are also more vulnerable to harassment. This is demonstrated perfectly on Obsessive Compulsive Cosmetics' Instagram, where the photos the brand shares of male models wearing lipstick are subject to more than a bit of hate.

It's important that we consider the queer community in our conversations, increase visibility of gender nonconforming humans in our media, and that we expand "the real woman" debate outside of the experiences of cis women. Interrogating what it means to be feminine and what it means to be a woman from a gendered perspective is essential in promoting the physical and mental wellbeing of the queer community.

Let's question the separation of department stores according to gender. Let's stop our daily microaggressions against transfeminine people, like feeling we have beauty authority over our friends AMAB. The way people's identities are called into question or put under attack based on presentation can be changed if brought to light by more activists and more voices. Because at the end of the day, who says real women can't have beards?

Want more fluidity? Check out the video below, and be sure to subscribe to Bustle's YouTube page for more inspo!

More like this
Berriez Founder Emma Zack On Her Size Inclusive NYFW Show
By Dominique Norman
The 19 Best Tweets & Memes About Bisexual Awareness Week
By Lexi Inks
An Honest Review of MeUndies Boxers, According To A Non-Binary Person
By Megan Lasher
Pro Footballer Zander Murray Is "Blown Away" By Support After Coming Out
By Sam Ramsden
Get Even More From Bustle — Sign Up For The Newsletter