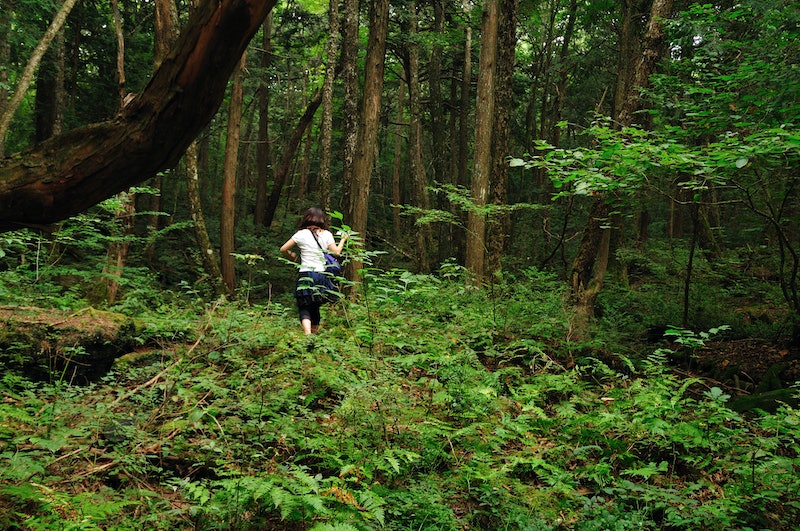 The new Natalie Dormer horror movie The Forest is more than just your best bet if you're looking to see Margaery Tyrell get chased by angry ghosts this weekend. Its setting — a Japanese forest called Aokigahara that is an infamous site for suicides (as well as a rich source of ghost mythology) — is real, and a sterling example of the many terrifying, scarier-than-fiction places that exist in our world.

But far from being tucked away in some secluded corner of the country, Aokigahara is right smack-dab in the middle of the nature area surrounding Mt. Fuji. In fact, the forest from The Forest is a tourist destination famous for its picturesque caves — every year, plenty of visitors arrive to hike, take photos, and engage in other wholesome activities that have nothing to do with shuffling off this mortal coil. Folks who can't read Japanese might miss the signs scattered throughout the forest's paths, offering support for those considering suicide; they might not even know the notorious history of the spot where they're taking Instagrams to show how well-traveled and outdoors-y they are

But the Aokigahara forest is far from the only pants-ruiningly creepy place that exist along the periphery of our regular lives. In fact, the five creepy locales below are just a handful of the many spooky sites throughout the world that hardly stand out from the totally normal environments around them.

Unless you're a fan of the TV show Supernatural or '90s alt-rock band Urge Overkill, you're probably not familiar with the small Kansas town of Stull. Stull is too small to have its own post office; however, it is not too small to have its own alleged entrance to Hell. You see, generations of supernatural theorists and beer-addled Midwestern teens alike have passed down the legend of Stull Cemetery, a spot alleged to contain (depending on who you ask) A. the cursed ruins of a church; B. the final remains of a witch who used to "do it" with Satan; C. a stairway that will lead you directly to Hell; D. all of the above.

Quoi? Popular local legend states that the cursed ruins of a since-demolished church on the cemetery grounds created a hot spot for all things demonic. The cemetery has been referred to as one of the "seven gateways to Hell"— supposedly, an entrance to Hell opens in the cemetery on Halloween and the spring equinox, for folks who want to get to Hell ASAP (and are too impatient to get there the old-fashioned way — by spending the rest of their natural lives acting like *ssholes).

Though the stories never seem to get it straight about exactly why Stull is so cursed, they all agree that it is definitely chock full of eerie, demonic stuff.

Stullites dismiss the legends, which local historians claim began in the 1970s as part of a "fraternity prank." Trespassing at the cemetery — which is closed to visitors — is a crime, and chasing after possible ghosts there will land you with some very real fines and/ or jail time, so stay the hell out of there (sorry, had to).

La Isla de las Muñecas is a "floating garden" island in the Xochimilco borough of the Mexican Federal District, which is famous for one thing and one thing only: being home to nothing but hundreds of dolls tied to trees. "Hmmm," you might be saying to yourself, "an island where the trees are festooned with weather-worn dolls that look fairly eager to chomp on my soul. Fair enough. I don't need any ghosts for this one to be spooky." Oh, you may not need any ghosts, but friend, YOU ARE ABOUT TO GET SOME.

These dolls didn't crawl into the trees on their own (though, I mean, they look like they could, right?). Rather, they were hung over the course of several decades by a man named Don Julian Santana, who lived in solitude on the island. Santana claimed he was inspired to hang the dolls after finding the body of a young girl who had drowned in a nearby canal, and then finding her doll soon after. Santana also claimed to have made contact with the girl's spirit, and hung the found doll — the island's first tree doll — in tribute to her. Though those close to Santana claim that there never was any drowned girl or ghost, you have to admit — there are definitely a helluva lot of busted-up dolls, which is probably a bit spookier.

I mean, the real question is what isn't haunted in New Orleans, right? The Southern city is probably equally famous for its exciting nightlife, delicious foodstuffs, rich history, and high density of alleged spirits. But even in a notably spirited city such as Nola, St. Louis Cemetery No.1 stands apart as one of the (supposedly) most haunted spots in town.

Since New Orleans is below sea level, many of the city's dead are interred in above-ground tombs. Being buried in a giant, hulking tomb-structure may not directly contribute to your becoming a ghost, but hey, it can't possibly hurt. And so, St. Louis Cemetery No. 1's above-ground tombs are purported to be the home of many a restless and historically relevant spirit — the cemetery was opened in 1789, meaning that its supposed ghostly inhabitants include Civil War soldiers, early Louisiana politicians, and victims of the city's 19th century yellow fever epidemic.

But perhaps the idea of thousands of possibly restless spirits packed into a one-block graveyard, placed within a fairly active area of the city, isn't quite spooky enough for you. Fair enough. Well, as an added bonus, St. Louis Cemetery No. 1 is the final resting place of Marie Laveau, who both dedicated fans of the supernatural and dedicated fans of the third season of American Horror Story know as a voodoo practitioner who so excelled at her craft, she was known as the "Voodoo Queen."

The cemetery recently closed to all but those traveling with licensed tour guides. While that might be a buzzkill for tourists, I have to say, as someone who almost got locked inside there by accident while on vacation a decade ago, it is probably the right call. But don't worry if you're a ghost-lover who can't get a tour — there are some great shots of the cemetery available on Google Maps, and also pretty much everything else in New Orleans, including that ham sandwich you're eating, is also haunted*.

*not a legally binding claim.

Situated on a perfectly normal residential street, the story of the Los Feliz Murder House starts on December 6, 1959, when Dr. Harold Perelson beat his wife to death with a hammer, nearly dealt out the same fate to their daughter (who managed to escape with her life), and then committed suicide by overdosing on pills.

Which would be a grim story all on its own, except...no one has really touched this house since that night. The property was sold to the Enriquez family in a probate auction in 1960; the Enriquez's never moved in, and the property remained untouched and under their son's ownership up until his recent death. Brave/ foolhardy trespassers on the property have reported that the house's interior remains untouched since that horrifying night, and that everything from the Christmas tree to the TV seem to be as they were in December 1959 (though some dispute this assessment). The house is private property, so you can't look around on your own — but luckily, the internet is full of other folks who already did.

OK, guys, this is a bit of a deep cut from my own local history, but stay with me here: Fairfield Hills Hospital was a psychiatric hospital that operated in southern Connecticut from 1929 through 1995. Like pretty much all shuttered psychiatric hospitals, Fairfield Hills is considered to be pretty haunted. It's considered one of the most haunted spots in Connecticut, which both is and isn't saying much (I'm from Connecticut, and as any New Englander worth their salt will tell you, everything is totally haunted up in New England, too; we're just low-key about it). But the truly stand-out thing about Fairfield Hills is that a portion of the hospital's grounds were recently turned into a public park, with hiking trails placed alongside the closed-up buildings.

You can't go inside the buildings (nor should you want to — not only would that be illegal, it would be incredibly unsafe, since the structures have not been maintained and are in various states of structural decay). But you can play Frisbee, go birding, or take a nice, relaxing nature walk among a bunch of buildings that may house the uneasy spirits of the dead. Hey, it's spookier than whatever else you probably had planned for your Saturday afternoon, right?