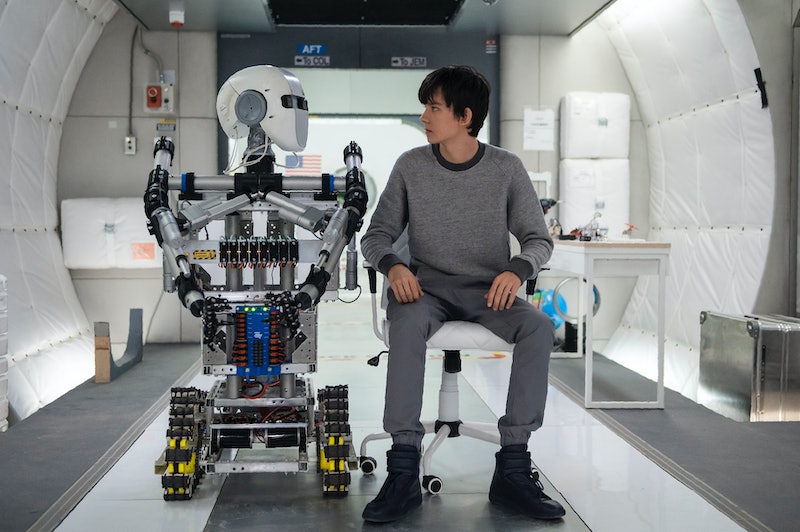 What does it mean to be a human? For 16-year-old Gardner Elliot, the answer isn't that simple. The upcoming film The Space Between Us goes intergalactic to find the answer. Bustle recently visited The Space Between Us set in Albuquerque and spoke with the film's stars and creators, taking off on a journey to discover what it means when a teenage boy finally gets to be a human for the very first time.

The film's story is unlike any other. It is considered "sci-possible," meaning the sci-fi elements that drive the plot forward are things that could very well happen some day. Set just into the future, the adventure begins when a space shuttle embarks to colonize Mars, only to discover that one of the astronauts is pregnant. The astronaut dies due to complications after landing but gives birth to Gardner Elliot, the first human born on Mars. From an unconventional and isolated upbringing blooms a curiosity for Earth. Eventually, Gardner starts up an online relationship with Tulsa (Britt Robertson), a hardened-by-life high school student in Colorado, whom he eventually meets on an interplanetary trip to Earth.

"No one knows [Gardner] exists," Butterfield tells reporters on set in Albuquerque. "His entire experience of the world... well, he doesn't really have any experience of the world." That quickly changes when Gardner manages to come to Earth to search for his birth dad — who he knows little about — and is introduced to a world that is entirely new to him.

One of the new things Garnder encounters on Earth is Tulsa, who couldn't be more different from Gardner. The one thing the two share is a lack of childhood. "[Tulsa] humanizes him," Butterfield says. "Through her, he learns to understand what it means to be human. There are emotions that he figures out that he's never experienced before."

"When they first meet each other online, they're both an outlet for one another," Robertson says of the connection between Gardner and Tulsa. "They meet for the first time — he's bizarre, and he's weird, and he's everything she's looking for in a way, because it's not everything she knows."

Unlike Gardner's fish-out-of-water character, Tulsa is streetwise and "tough," according to Robertson. The actor explains that Tulsa has been disappointed by relationships before, which have closed her off, but she's eager to build successful relationships in the future.

Both characters go on massive journeys throughout the film. The main journey is to find Gardner's father, according to Robertson, but that's only a portion of it. "It's really about finding herself through this guy who is able to open her eyes and also make her feel loved in some capacity, which is something she's never felt before."

The Space Between Us is set to release July 29 nationwide.