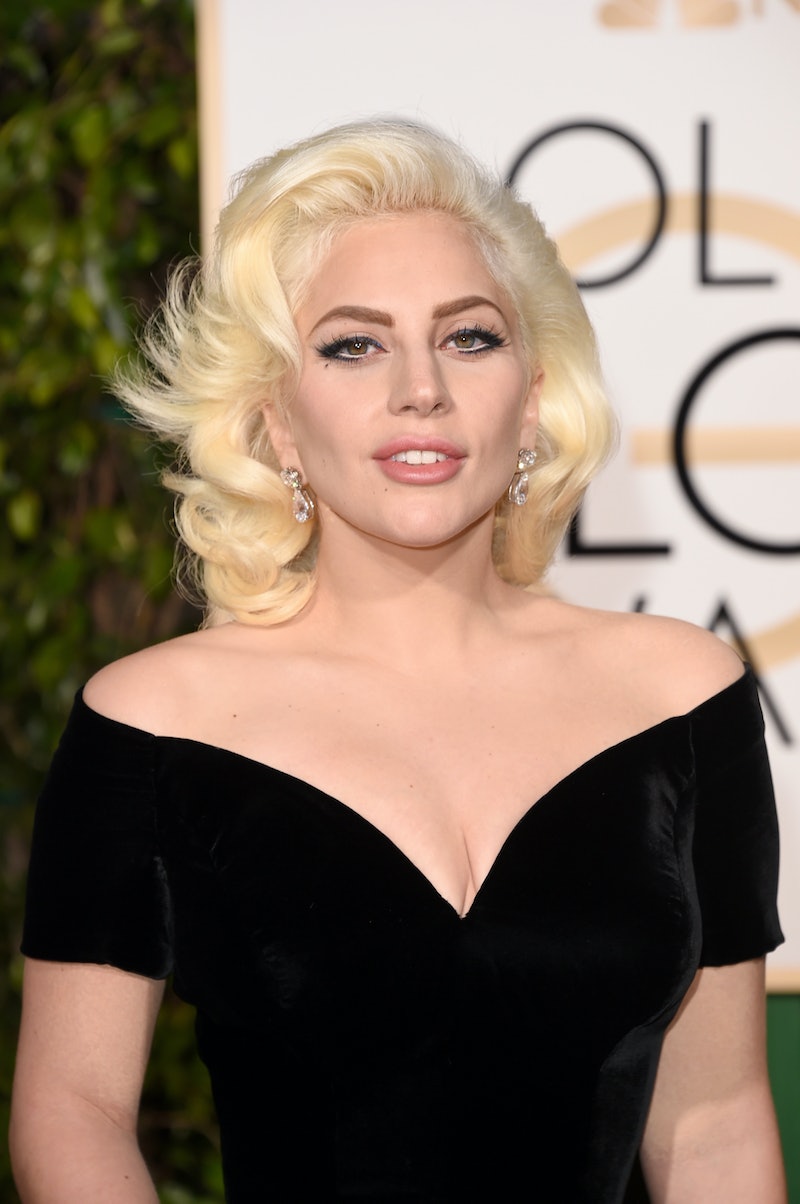 Did anyone not expect Lady Gaga's 2016 Golden Globes red carpet look to be perfection? The singer and actress made major waves last year when she debuted in the role of the countess on American Horror Story: Hotel, and even from the very beginning, it was easy to tell that her character's fashion would be one of the stars of the show. Tonight, she bypasses even the Countess herself when it comes to fashion. She's giving serious Madonna Material-Girl-meets-Hollywood-glam vibes, and I'm loving it.

Tonight, Gaga is nominated for her performance in American Horror Story: Hotel, and while her performance is undeniably amazing, one of the first elements of her character audiences noticed — other than, you know, the blood fetish — was her fashion. From the very first promo images of Gaga's character Elizabeth's razor sharp silver, beaded glove, she was bound to be one of the most creepily stylish of the cast. Plus, as the wealthy owner of the Hotel Cortez, Elizabeth would clearly be on top of the fashion game, and she is based on a countess after all. This season has proved that fashion can be integral to a character. From Elizabeth's glamorous looks to her provocative moments, fashion has basically become another character on the show, and Gaga clearly knew that her red carpet look would need to rival one that Elizabeth herself would wear, and boy, does it ever!

Gaga's gorgeous blonde locks are teased to Marilyn-Monroe-meets-Madonna perfection. The uber glam look is definitely similar to the old Hollywood style she's been rocking as of late, and while some might find it boring, I think it's an era that totally suits her! Why should do rock anything else, especially for an awards show.

The stunning column silhouette Versace gown features a stunning off-the-shoulder design, and the black is a totally classic choice.

One of the best parts of the dress for me though is how reminiscent it is of some famous fashion moments. While she's clearly giving Madonna hair, the black gown is also giving pink Material Girl dress vibes. Plus, the comparisons to Julia Roberts' red opera gown of Pretty Woman fame are totally obvious.

Wherever the inspiration for the gown came from, there's little doubt that the frock is one hell of a stunning moment for Lady Gaga and one that will make even her character Elizabeth jealous.