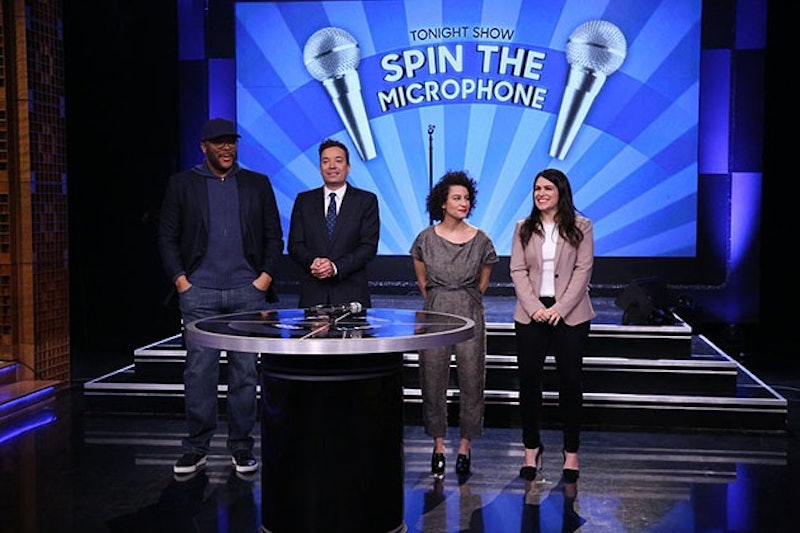 ICYMI, Abbi Jacobson and Ilana Glazer of Broad City played "Spin the Microphone" on Friday's episode of The Tonight Show Starring Jimmy Fallon and Tyler Perry, and if I had to guess, I'd say these are what dreams are made of. To make it even better, because why not, the Broad City co-creators/co-stars covered two of the most epic '90s songs: "I Don't Want to Wait" by Paula Cole (shout out to Dawson's Creek!), and Bell Biv DeVoe's "Poison." Specifically, in fact, Abbi Jacobson was the one to cover the Dawson's Creek theme song. I'm done. I can go home now. Forever. It doesn't get better than this.

If you're unfamiliar, Fallon's "Spin the Microphone" is basically just "spin the bottle" meets karaoke. With atmospheric lighting. And famous people. On live, national television. In front of hundreds of thousands of people. The wheel spins, you become summoned with the responsibility to carry a tune, do it justice, and make the audience laugh all at the same time. Much like both spin the bottle and karaoke in real life, the stakes are high.

Good thing Jacobson and Glazer didn't disappoint when presented with the task. (Do they ever?) Jacobson, who loves going first, apparently, went first. And of course, because God exists, she landed on the theme song from Dawson's Creek: Cole's "I Don't Want to Wait." Jacobson hit those high notes with the kind of bravado that would make Pacey cry. As she spewed the words "will it be yes or will it be... sorry?" I felt a phantom pang in my heart for Joey and Dawson's will-they-won't-they friendship/romance.

And Glazer? Her duet with Fallon, their palpable on-stage chemistry, their hand movements, their sweet and opposite voices blending to the melody of "Poison"... it was all too much. I probably can't get it out of my head. I loved it. It was poison. (I could go all day, really.)

Watch the glory unfold in the video below. You're welcome.