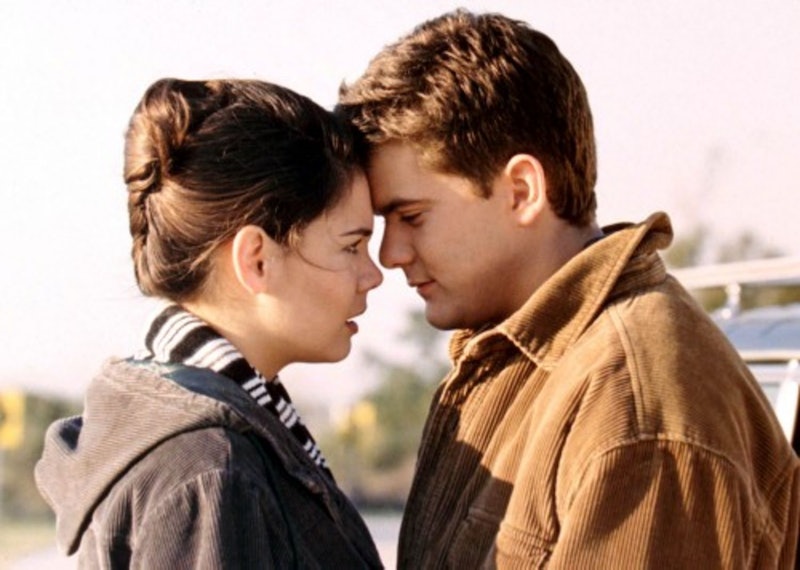 As if you needed any further proof of Hulu's love for you, thanks to a new deal with Sony Television, Hulu will stream Dawson's Creek and Party of Five . Yes, you will soon have access to every episode of two of the '90s most iconic shows. The shows are part of a package deal that also includes The Shield, Damages, and many of Sony's hit films like My Best Friend's Wedding, which is all exciting — but personally, I can't wait to revisit the '90s goodness of the shows, as well as reunite with the Capeside gang and the Salinger family.

Even better: While Dawson's Creek was previously available on Netflix until 2014, this marks the first time Party of Five will be available to stream without purchasing each individual episode.

This is a great day for TV fans because these two '90s teen show were full of defining TV moments. They are so much more than just nostalgia fuel for '90s kids (although they definitely fulfill that role as well). They are smart, captivating shows that took major risks. While you wait not so patiently for Hulu to add Dawson's Creek and Party of Five to the library, take a look back at both show's most groundbreaking moments.

Jack and Ethan shared TV's first gay kiss between two men in a beautiful, but ultimately heartbreaking moment. Just as important as the kiss itself is the moment after the kiss when Jack has a heart to heart with his father, who, much to Jack's surprise, offers him love and acceptance. TV has come a long way in its portrayal of LGBT relationships, and this scene signified a major step forward.

Charlie's cancer diagnosis was a huge deal. After the Salingers lost their parents, Charlie became the de facto patriarch of the family, so to see him hit with a life-altering diagnosis in his early 20s made for powerful TV. It was also a storyline that emphasized cancer does not discriminate by age.

Before Dawson's Creek, teen characters were not hyper-intelligent, analytical wunderkinds. I know it's hard to believe, but before Dawson, Joey, Pacey, and Jen appeared with their messy lives and adult attitudes, teen shows were very different. The premiere episode launched a cultural phenomenon and made teen TV must see for everyone.

Not only did the show kill off a major teen character, it sent Jen up to the pulpit to eulogize Abby by talking about the hypocrisy of religion and her friend's toxic personality. The scene is electric, but Jen was punished by her God-fearing grandmother who kicked Jen out of her home because of her colorful eulogy.

5. The Salingers Meet The Drunk Driver Who Killed Their Parents, Party Of Five (1994)

One of the show's most earnest outings featured each of the Salinger kids meeting with the drunk driver who killed their parents. Anyone who has seen this episode knows the emotions are real.

And so a love triangle that defined a generation began. Pacey and Joey's first real kiss led to the show's greatest relationship, but in the beginning it marked a seismic shift in the show's central dynamic.

7. The Salingers Hold An Intervention For Bailey, Party Of Five (1997)

It may seem quaint by today's standards, but in an era when family dramas reigned supreme, the big intervention episode was a huge water cooler moment. The world was invested in the Salinger family, and Bailey's destructive behavior was finally addressed in an episode that was all tears, all the time.

When certified '90s queen Jennifer Love Hewitt joined the cast, the series gained a breakout star and the '90s found its icon. Love Hewitt's character Sarah was so popular she ultimately got her own spinoff, Time Of Your Life .

The decade's most important teen show eloquently spoofed one of the decade's most talked about films. What could go wrong? Absolutely nothing. This "found footage" style episode is perfect.

It wasn't the first time a network character came out, but it remains one of the most amazing and painful television moments ever because Jack was forced to come out by his vindictive teacher. Jack bares his soul, and it is an intense scene that reveals the worst about Jack's teacher and the best about his friends.

Party of Five dealt with a crazy amount of social issues, but the evolution of Claudia, which took place in real time for the viewers was pivotal. By the time fans recognized she was now a teenager capable of making plenty of mistakes, they too had grown up right alongside her.

It won't be long before you can relive these moments and so many more thanks to Hulu. There has never been a better time to be a '90s kid.