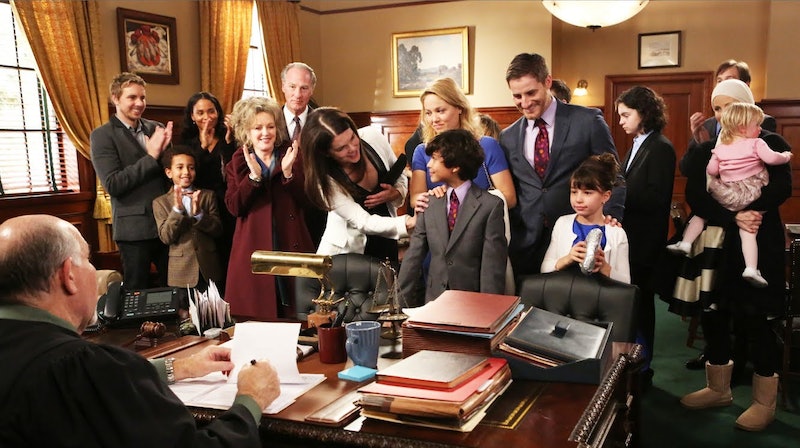 When the Bravermans signed off one final time last year, the heartbreak was real. Now series creator Jason Katims is giving you a good reason to hope again: the showrunner would like to bring back Parenthood . According to The Hollywood Reporter, Katims spoke about his hopes for a future revival of Parenthood after his time at the TCAs promoting his new show The Path. While there are no current talks — which makes sense given how busy both Katims and the cast are — he said he would like to revisit the Bravermans after some time had passed. Katims was inspired by Richard Linklater's film Boyhood, and the way it tracked the evolution of a family over 12 years.

"That would be a really interesting thing, to revisit Parenthood when Drew (Miles Heizer) has now graduated from college and Haddie (Sarah Ramos) has graduated from college and somebody, who knows, may be nearing retirement age," Katims told THR. "Stuff that gives us fodder for new stuff and things we haven't explored before. Seeing Jabbar and the kids growing up would be really interesting."

Just knowing that my future may not be completely sans Bravermans is enough to make me giddy, but the fact that Katims is already thinking about a direction for a future continuation is enough to make me ecstatic. Obviously, Katims is brilliant and I love his plan, but if he needs anymore inspiration to make this continuation thing happen, I have a few more Parenthood spinoff ideas.

I think everyone can agree there was not nearly enough Haddie in Parenthood's later seasons. Haddie was a total boss who was there for her brother, who eloquently came out to her parents, and overcame teen angst to become besties with her cousin. What happened next though? I want to see what kind of amazing and complicated woman Haddie became after college — along with every misstep she made along the way.

2. The Graham Kids All Grown Up

Joel and Julia ended up with a four kid brood just like Camille and Zeek, and I would love to see Sydney, Victor, and their two younger siblings as teens/pre-teens. You know Sydney's teen years are going to make Amber's look like a piece of Camille's best pie, and I can see Victor becoming the mysterious cool kid everyone in high school is obsessed with. Plus, watching Joel and Julia deal with their family growing up would make for the best kind of drama.

Jabbar announces Crosby and Jasmine are going to be grandparents, Aida is heading for college, and Amber is more than ready to take over the Luncheonette — what does Crosby's second act look like? How do he and Jasmine deal with an empty nest? Is Adam still around to give his little brother advice? I have so many questions.

As hard as it was to lose Zeek, there is no way Camille isn't honoring his memory by living her best life. Maybe her artwork takes off in Europe and she opens a gallery, maybe she finds herself falling for a new man, and maybe it all elates her and scares her in equal measure. All I know for sure is I would watch that show.

5. Max As A Successful Adult

To have Max's life be perfect would not be true to his character, but I think he will definitely have a booming photography career. Putting the focus on Max grappling with the realities of adulthood while excelling in some areas and being completely confused by the more emotional parts, would make for riveting TV.

Amber had a sweet career path set up thanks to her awesome work at the Luncheonette, but I still want to see how much like Sarah she turns out to be. Her life as a single mom would be fascinating to watch simply because Amber was such a great character. I want to see her balancing raising Zeek with building her career and having a personal life. I want to see her screw up, excel, and call Sarah constantly for support. Basically, I want Mae Whitman to have her own show.

Sometime in the future, all of the Bravermans reunite for a big family reunion. Maybe it's the first time many of them have seen each other in a long while. There's fights, secrets, tears, and so, so much bad dancing, and it's perfect.

Who knows if or when Katims dream of a Parenthood revival will come to fruition, but if it ever happens, there is no doubt the Bravermans will be just as wonderful as you remember.