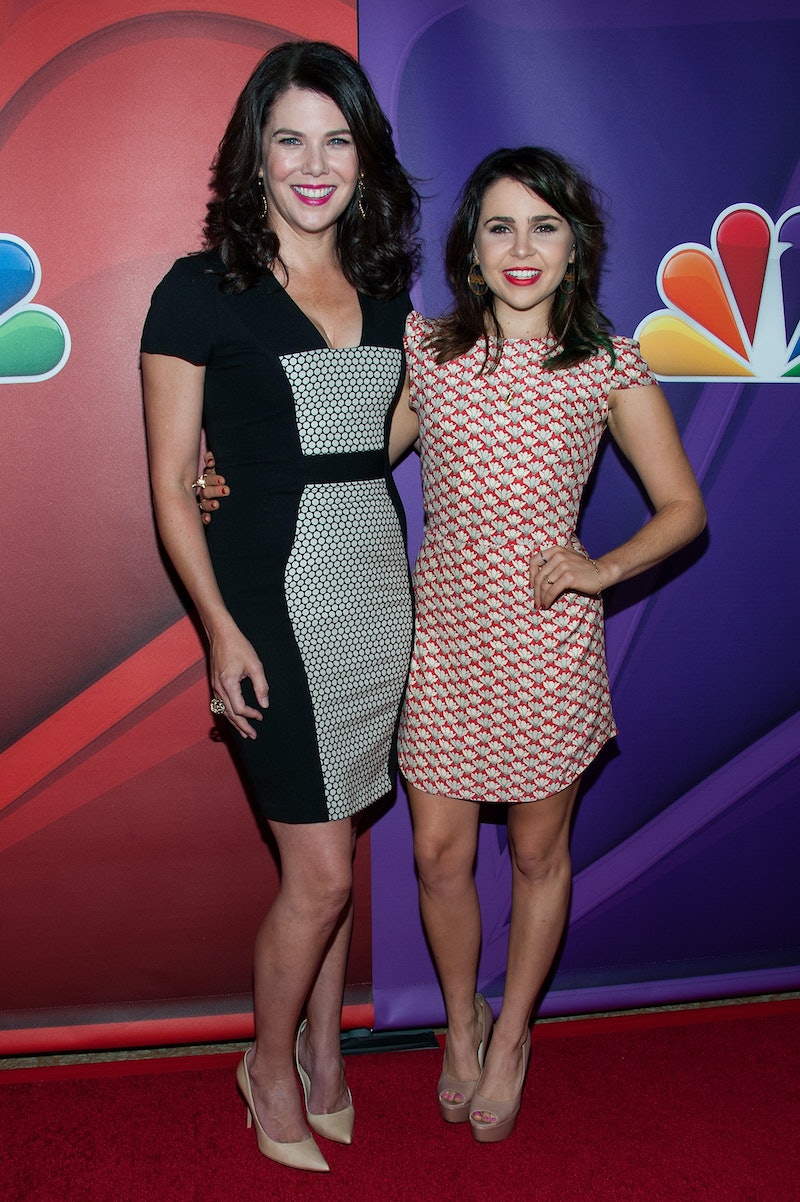 If you've missed the incredibly tender mother-daughter relationship between Mae Whitman and Lauren Graham on Parenthood since the series ended with its extra-emotional finale earlier this year, rejoice: the on-screen mother/daughter team and IRL BFFs are teaming up again to make The Royal We, a CBS Films adaptation of the book of the same time by Jessica Morgan and Heather Cocks. Graham will be writing the script this time, and both Graham and Whitman will work together to produce. And even though they are not going to be playing mother and daughter in this one, it's exciting that they're working together on the project, which is, according to The Hollywood Reporter, meant to be "an acting vehicle for Whitman." They are a formidable team!

Whitman, 27, and Graham, 48, had such a believable bond through the six seasons of Parenthood as Sarah and Amber, the creative, giving and witty mother-daughter team. It was hard to say goodbye to them when they had such a wonderful relationship on screen, but that's not the only reason that fans should be excited about the pair of them reuniting for this project, because they love working with each other as much as they just love each other.

Whitman and Graham bonded almost immediately when they first started working on Parenthood, and they are open about their mutual love and support. And Whitman is proud to announce, verbatim, "Laura Graham is my best friend." Ugh, if only we were all so lucky.

And Made An Amazing On-Screen Mother Daughter Team

Amber and Sarah had one of the most authentic relationships on the show, probably because their storylines were often the hardest: Amber was one of the toughest of the Braverman clan, and Sarah was always trying to encourage her to be herself and make her own choices, and appreciate herself for who she was. She helped her through so much, including the welcoming of her new baby, who she named Zeek, of course. And even though Graham is behind-the-scenes for The Royal We, Whitman is sure to have all the support in the world from her surrogate acting mom on the set.

Whitman told Vulture that Graham was her mentor and hero: "When you're acting with her, I could go in and not have any idea what I was doing and look into her eyes and know that I was going to be taken care of, because she's truly the most elegant and smart and funny and classy person I know," she said, after Graham presented Whitman with the Gracie Award for Outstanding Breakthrough Performance. Graham had loving words for Whitman too, of course: "I got to watch Mae Whitman blossom into a masterful performer whose gripping portrayal of Amber is clearly a career-defining role and, simply put, outstanding," she said. Awwwww.

As proven by this amazing photo of Lauren Graham sandwiched between her two iconic and beloved television daughters, Rory Gilmore, that Whitman posted on her Twitter.

Sadly, even though — for now — it looks like Graham will be staying behind-the-scenes, hopefully she writes in a lot of scenes where Whitman can bawl her eyes out and show us that it's OK to cry. Watching Parenthood was an emotional workout, and even though The Royal We sounds like much lighter and much more carefree movie, I would not say no to one or three crying scenes of Mae Whitman. She knows how to touch your heart, I have to say. And that scene where the two of them sang Joni Mitchell together? I'm not crying... you're crying.

Congratulations to this great pair of great ladies on their new film! And who knows: Graham still has time to cast herself in the project after she's finished writing it. Because who is better qualified to play an on-screen mom to Mae?

More like this
Paapa Essiedu Likes To Keep His Relationship Pretty Private
By Maxine Harrison
John Mulaney & Olivia Munn's Relationship Timeline Features The Comedian's First Father's Day
By Jordyn Tilchen
Adele’s All-Female Lineup Includes Kacey Musgraves, Mahalia, & Self Esteem
By Shahed Ezaydi
'Succession' Season 4 Could Be The Show’s Last
By Kadin Burnett and Gabrielle Bondi
Get Even More From Bustle — Sign Up For The Newsletter