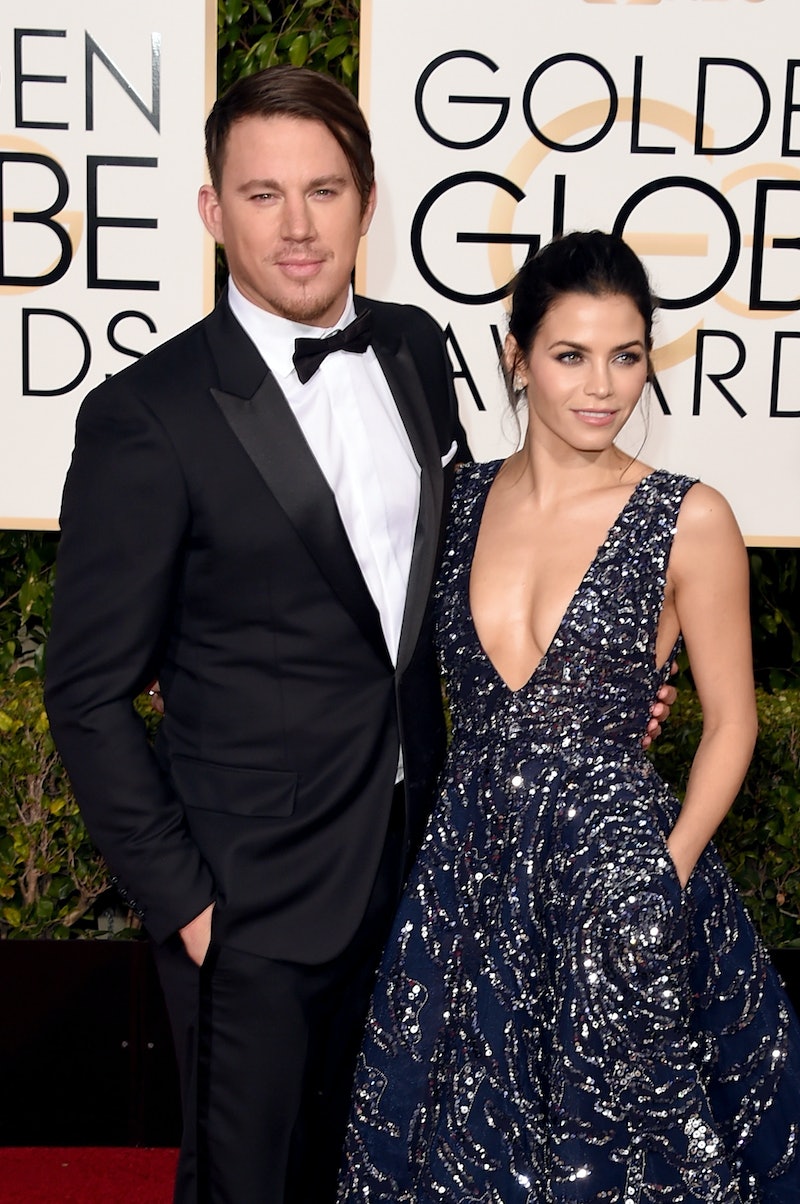 When it comes to a red carpet event, anything can happen. Awkward interviews, fashion faux-pas, new relationships revealed — you name it, the red carpet has covered it. And that's to be expected. What's not to be expected (ever, under any circumstance) is seeing the incredibly handsome/god-like figure of Channing Tatum sporting a crazy combover on the Golden Globes red carpet. And that's precisely what went down, and people (myself included) cannot stop talking about it. Tatum appeared looking dapper as ever alongside his wife and fellow actress Jenna Dewan Tatum on Globes red carpet this Sunday evening. That is, until audiences noticed his weird hairstyle that left us to speculate the reason behind Channing Tatum's new hairdo.

Was it for an upcoming role? Is he working on his best Donald Trump impression? Is he secretly an emo teenager moonlighting as a Hollywood celebrity? Am I having another strange Channing-centric dream (again)? Thankfully, social media was all over answering this pressing question and quickly found out the method behind this combover madness. It turns out that the general consensus for the actor's weird hair is that it's all apart of his upcoming role in the movie Gambit. So at least now I can exhale.

Knowing this definitely makes me feel better about Tatum's fashion choices. (If this hairstyle was done on his own accord, I'm not sure how I would've handled it.) But it still is definitely an odd look to see him sporting nonetheless. Now am I any less attracted to Tatum than I was before seeing this, um, interesting hairdo? No, of course not. (I'm only human, after all.) But it's comforting to know that even the most attractive people in the world aren't immune to weird hair looks.

More like this
Pamela Anderson’s Dating & Marriage History Could Be Its Own TV Series
By Jake Viswanath
At 28, Rosie Perez Risked Her Career To Stop Playing Stereotypes
By Gabrielle Bondi
Here’s Everything Coming To & Leaving Netflix In February
By Jake Viswanath
Who Is Allison Williams Dating After Her Divorce? She’s Engaged With A Child
By Jake Viswanath
Get Even More From Bustle — Sign Up For The Newsletter
From hair trends to relationship advice, our daily newsletter has everything you need to sound like a person who’s on TikTok, even if you aren’t.