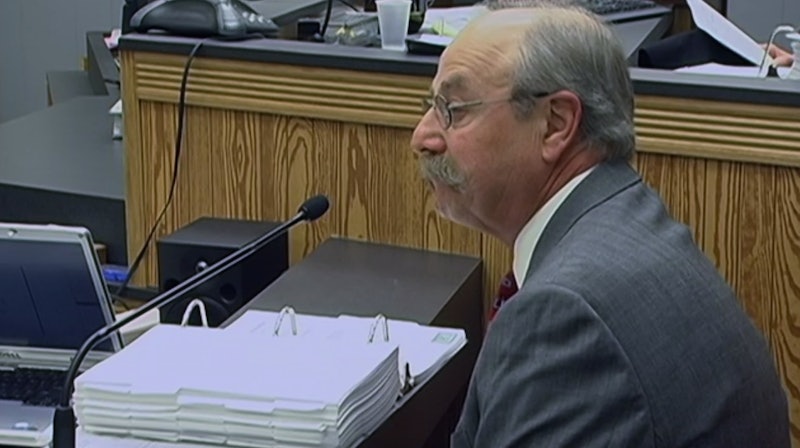 Making A Murderer is full of odd personalities and interesting characters who populate the world of Manitowoc, Wisconsin — and none of them have a mustache like Mike O'Kelly, who, along with his curly facial feature, worked with defense lawyer Len Kachinsky on Brendan Dassey's case after Dassey was accused of murdering Teresa Halbach. Steven Drizin, an expert in false confessions and one of Brendan's post-conviction lawyers alongside Laura Niridir and Robert Dvorak, accused O'Kelly of being "only interested in getting Brendan to plead guilty" in the Netflix documentary. O'Kelly, however, maintained that this accusation was false and did appear to be upset over Halbach's passing, crying in court over the sight of a blue ribbon tied in front of her church. Bustle has reached out to O'Kelly regarding the documentary series' portrayal, but has yet to hear back. So who is Mike O'Kelly, aside from what is shown in the Netflix series?

O'Kelly was on the record as having a negative view of the Avery family during the initial trials. In a correspondence that was used in one of Dassey's hearings as to why he was wrongfully convicted, O'Kelly claimed,

"[The Averys] are criminals. There are members engaged in sexual activities with nieces, nephews, cousins, in-laws. Customers or their relatives unwittingly become victims of their sexual fantasies. This is truly where the devil resides in comfort."

There is no known evidence to back up O'Kelly's shocking claims against the Averys.

Now, in 2016, O'Kelly is still working as an investigator. What he investigates, however, has changed a bit. O'Kelly has been working regularly as a forensic cell phone data consultant in high-profile cases, according to reports and his LinkedIn page. According to the Gazette Review, O'Kelly has gone by the nickname "Cell Tower Mike" and in 2015 "O’Kelly was a speaker at a conference held by the Nebraska Criminal Defense Attorneys Association." He was last seen working on a case where he is being paid "one of the highest [fees] if not the highest ever for an expert in a Macomb County case," also according to the Gazette Review.

Len Kachinksy, in an interview with Journal Sentinel, called O'Kelly "a loose cannon," and claimed that hiring him was a mistake. (O'Kelly has also not responded to Bustle's request for comment regarding Kachinsky's comments.) Despite claims like Kachinsky's, it seems that O'Kelly is having no trouble getting work. Now that O'Kelly's name is being brought up in the discussions surrounding Making a Murderer, hopefully, O'Kelly himself will speak up and set the tell his side of the story regarding the Dassey trial –– but until then we'll need to abide by the rules of justice and assume he's innocent unless proven otherwise.

More like this
The 'Black Bird' Stars Are Both Heading Back To Apple TV+
By Brad Witter
Why 'Black Bird' Suspect Larry Hall Recanted His Jessica Roach Confession
By Brad Witter
What’s New On Netflix: 'Never Have I Ever' & 'Indian Matchmaking' Return
By Arya Roshanian
Everything To Know About The HBO Max & Discovery+ Streaming Service Merger
By Brad Witter
Get Even More From Bustle — Sign Up For The Newsletter