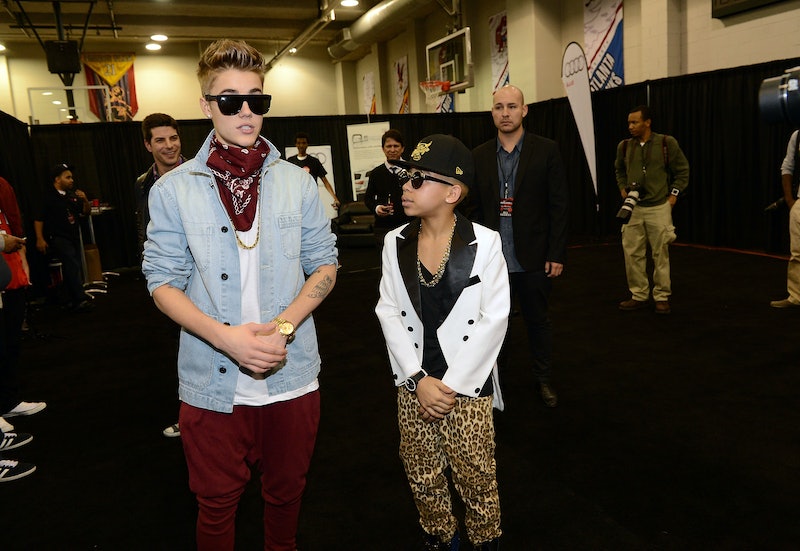 Justin Bieber cannot be trusted. There's that whole thing where he drives drunk and puts innocent lives in danger, and that thing where he likes to defend Chris Brown, pees in mop buckets while cursing the name of Bill Clinton (I don't even know), and dresses in the clever disguise of a five cent Halloween ghost while sneaking into Brazilian brothels. He also invented the word "swaggy," and no one should be proud to have that on their resume. And Justin Bieber's mugshot is just, sigh. But that's not all Bieber has done: He also might have fudged a fact to several governments.

When Bieber was arrested like the classy young man he is for drunk driving, we learned some valuable information about Bieber, and I'm not just talking further confirmation of his downward spiral. No, we also learned that, according to Bieber's (expired) license, he is 5'9".

Which, to put it simply, seems unlikely.

Now, in the wide perspective of the world, is it all that crucial that this pop star might be lying about his height, especially when he's rampaging through the streets in a giant metal death machine while inebriated? Nah. But there are two things here that make me want to debunk Bieber's proclamation: 1) It's silly, and 2) as a woman of 5'8", I have encountered many a man in my day who have claimed to be 5'9" to my face while standing shorter than me, so call it a personal crusade. And actually, let's tack on a more benevolent reason: 3) It's OK to be short, Bieber — there's no shame in it. I just want to help you accept your true self. So let's begin.

First, the proclamation itself:

Then, some simple Googling

Google immediately debunks his license height. And yes, I trust Google more than I do Justin Bieber:

And some photographic evidence, for science:

Carly Rae Jepsen (pictured above), is 5'2". Bieber here is slouching a little bit, but it's not like a seven-inch slouch. She could be wearing heels, though. Regardless, these findings are still more in line with a 5'7"ish height than his 5'9" lie. At least he's taller than the baby?

Selena Gomez is 5'5". Granted, she is wearing heels here — but if you look at his feet, it also looks like he's wearing lifts, too. The famous short dude's classic plight. It's okay, Bieber, Tom Cruise understands you.

I also chose this picture because it makes it look like Bieber is Selena Gomez's butler, and that brings me joy.

It also turns out that this lie goes back way further than Bieber's DUI: A GQ article from May 2012 claims that Bieber's height is 5'9", which spurred one Youtube user to investigate this claim himself:

More like this
You’ve Got 'Love Island’s Farmer Will All Wrong
By Jack Orenstein
The Meaning Of Steve Lacy’s “Bad Habit” Lyrics
By Radhika Menon
Olivia Rodrigo Manifested Finally Meeting Demi Lovato
By Jake Viswanath
Paris Hilton & Carter Reum’s Relationship Timeline Includes A 2023 Grammys Date Night
By Bustle Editors
Get Even More From Bustle — Sign Up For The Newsletter
From hair trends to relationship advice, our daily newsletter has everything you need to sound like a person who’s on TikTok, even if you aren’t.