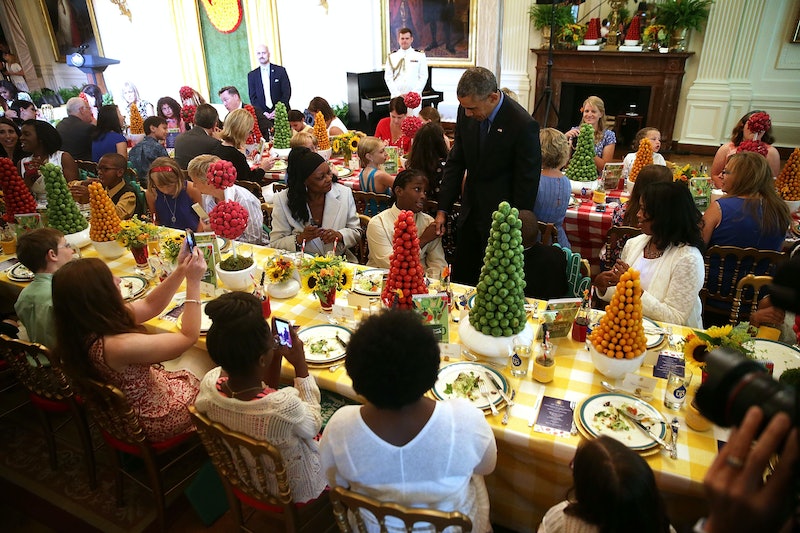 The First Lady has invited over 20 special guests to watch the president's final State of the Union address from her guest box. One of Michelle Obama's guests is 12-year-old Braeden Mannering from Delaware, who has kept his promise to the First Lady to pay it forward. In 2013, Mannering was invited to the Kids' State Dinner at the White House after winning the Healthy Lunchtime Challenge, a recipe contest for young children that encourages them cook and eat healthily. After being congratulated by the First Lady and encouraged to use his experience to help others, Mannering did something pretty awesome.

Alongside his mother Christy, Mannering created Brae's Brown Bags (3B), a program that addresses food insecurity and healthy eating, regardless of income. Since July 2013, when the program kicked off, Mannering has given to the homeless over 4,600 brown paper bags filled with three healthy snacks, a water bottle, and a hand-written note, along with a list of other resources for healthy eating. The organization's website outlines its main mission.

Our mission is to provide healthy snacks to homeless and low-income individuals. Every bag includes a letter from Braeden, contact information for additional services who can provide further assistance. Three healthy snacks (each one is below 180 calories) and a bottle of water.

Our belief is that every person regardless of their financial situation deserves to have access to healthy food. This helps to balance the paradox between obesity and food insecurity.

The program doubles as a charitable organization that accepts donations, speaks to young people about food insecurity, and distributes educational books to them. This past September, CNN interviewed Mannering's mom Christy and asked her about how the paper bag idea sprouted.

Braeden was rummaging in the kitchen and emerged with a brown paper bag. Inside was a water bottle, potato chips, fruit snacks and granola bars. He asked me if we could go back and give it to one of the homeless people.

His request came after he had already given his souvenir money to homeless people on the streets of Washington D.C. According to government statistics on hunger in America, 46.7 million people lived in poverty during 2014. Over 15 million of those people were children who have no control over their situation. An additional 15 million children live in households where food is not guaranteed to be available. The USDA Economic Research Service reported that 14 percent of U.S. homes were food insecure during 2014.

Food insecurity isn't the only problem with poverty. Low income levels also contribute to the decline in the health of Americans. Healthy food isn't as readily available to low income families as it should be, leading to higher medical bills, obesity, diabetes, and other health problems among the population. Over 20 studies, conducted between 2003 and 2014, suggest that although calorie intake does not significantly differ between people who use food stamps and people who do not, the quality of food does.

The study's lead author Tatiana Andreyeva found that people on food stamps consumed less fruits, vegetables, and whole grains and instead incorporated significantly more added sugars into their diet, reported NPR. By addressing hunger and teaching healthy eating simultaneously, Mannering is helping to solve a myriad of other health problems associated with poverty. He is a living example of the fact that when inspired, children, no matter how young, are big enough to make a difference with their genuinely kind and giving spirits.

And considering her crusade to decrease the rate of obesity among young children, Michelle Obama must be especially proud.