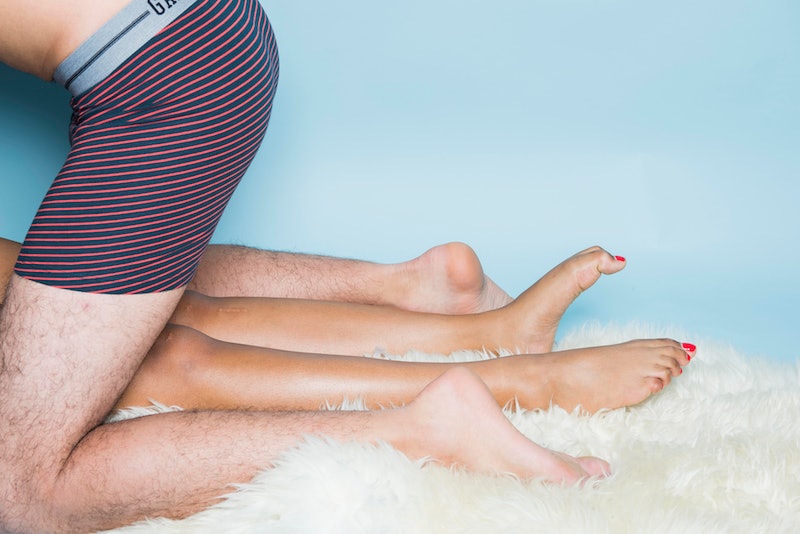 It's probably a question you've asked yourself: How long is sex supposed to last? And that answer is: Well, that totally depends. A survey from October 2015 by sex toy retailer Adam & Eve found that the average amount of time that people have sex is 7.3 minutes. Although the same study also found that, for most, foreplay lasts 20 minutes, there's something about that 7.3 minutes that makes me wonder if that's a good or bad thing. Well, if you're in a rush, a quickie can be a great thing; if you have no place to go and hours to kill, then it might be a bad thing.

There is no right or wrong amount of time that sex "should" last. Sure, you can be disappointed that someone doesn't last as long as you'd like them to or, if immediately after they orgasm they roll over and go to sleep with zero regard to whether or not you climaxed, but you can't really fault someone for coming too fast. Just like you can't fault someone for taking forever, especially if alcohol, stress, or anti-depressants are involved, all of which can make having an orgasm quite a feat.

I asked 15 women how long sex usually lasts for them. Here's what they had to say.

"It completely depends. Because I'm in a lesbian relationship there's not as much as a natural endpoint, so we can easily get into a marathon of like an hour with little or no rest. And then sometimes those marathons add up into an ultra marathon and it's five in the morning and you haven't slept yet. But sometimes one round will be a quick and just be focused on one person, and then it can last as little as five minutes, probably less."

"Usually at least an hour, if we're counting foreplay. I'm not much of a quickie person."

"If you're talking about the actual first penetration to done, I'd say we average 10 to 15. With his work schedule we only get to get it on every other week so we try to make it last a little longer when we can. Unless he comes at me in the shower and then it's five to six minutes tops."

"If it's in the morning before work and I have to get up, it might literally only be for, like, three minutes. But it's one of those rare, exquisite moments when it's 8 p.m., I'm not exhausted, I'm not cemented down by a giant meal I just ate, and I'm in an especially sex-craving part of my ~monthly cycle~, and my partner is down to clown? Two hours is not out of the question. And on nights like that, there's a better-than-good chance of a 15-minute, post-game quickie later that night before crashing. And honestly, the '15-minute quickie before crashing' is the most frequently occurring middle ground between those other two extremes. Most of the time, it's like, 'Let's make sure I have two really good orgasms, and you have one really good orgasm, and as soon as that's done, we can be done.'"

"Depends on the person, but 30 to 90 minutes seems to be the average lately."

"Not counting any foreplay, I would estimate my current partner and I spend approximately 10 minutes actually having sex. But, when I asked him this question, he guessed 20 minutes. Regardless of what the actual answer is, I thoroughly enjoy having sex with him, so in conclusion time doesn't matter. The end."

"With foreplay, I'd say we can go anywhere from 30 minutes to an hour, if we both exercise self-control. As for actual penetration, I'll say maybe 10 to 15 minutes. If he's been taking his anti-depressants regularly, it could go over a half hour, and honestly that's just frustrating for both of us."

"This weekend I saw an old college fling and the minute we saw each other kind of jumped each other's bones and were done in less than three minutes. I've also had sex with the same boy for almost an hour without pausing and loved every minute of it."

"If it's been awhile, less than 10. If we've been doing it pretty regularly, probably closer to 20. But that's not including the obligatory two minutes of foreplay."

"My boyfriend isn't huge on foreplay, so that's like five minutes and then 20 to 45 minutes of sex. But with an ex it was one to two hours, including foreplay. Lots of foreplay."

"A long time actually... but more like 30 minutes to an hour. My girlfriend and I joke about how much longer lesbian sex is versus straight sex. We can hear her neighbors having at it while we're on FaceTime and we shake our heads when it's over so quickly."

"I have sex for about 15 minutes, and that's perfect for me and my husband. My college friends once tried to convince me they were having sex sessions that lasted three hours, and I was baffled and not at all envious. There's not much I like doing for three consecutive hours. Not even shopping, and I f*cking love shopping. I think they were trolling me. That sounds flat-out exhausting."

"To be honest, 15 minutes seems to be the norm for actual penis-in-vagina sex. Though foreplay/oral could be longer than that... personally and, um, er... professionally too."

"I would say that sex with my partner is usually between 15 and 20 minutes. It could be much shorter, but I don't think speed is the point. Though it's sometimes hard to judge. Sometimes it seems like an hour passes, but I don't know if that's because of a nap after or because we're actually having sex."

More like this
My Partner Wants Me To Wear A Diaper During Sex. Help!
By Sophia Benoit
18 Hinge Prompt Answers To Try If You’re Looking For Something Casual
By Lexi Inks
12 Aphrodisiac Desserts To Spice Up Your Valentine’s Day
By Kaitlyn Wylde
12 Active Date Ideas That'll Get You & Your Boo Outside
By Lexi Inks
Get Even More From Bustle — Sign Up For The Newsletter
From hair trends to relationship advice, our daily newsletter has everything you need to sound like a person who’s on TikTok, even if you aren’t.