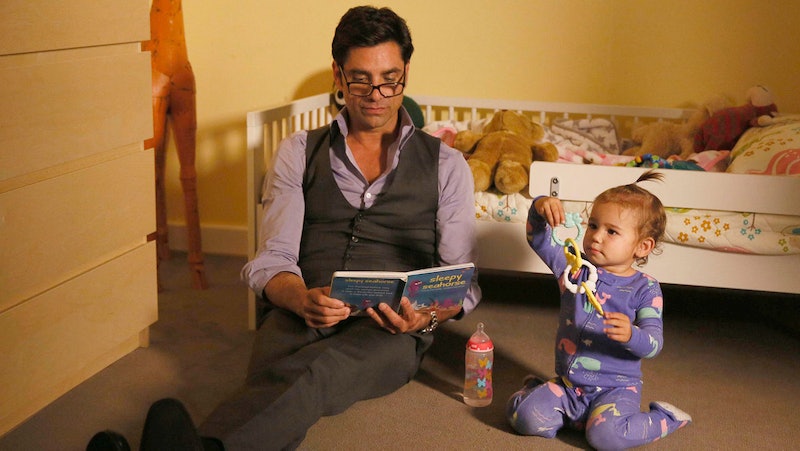 Alright, I'll admit it: the main reason I decided to start watching the new John Stamos sitcom Grandfathered on FOX was due to my longtime crush on Stamos. It wasn't because I love sitcoms (in fact, I generally dislike most sitcoms... but I promise I love mindless TV as much as the next person) or because I was looking to fill a void in my Tuesday night viewing schedule. But because as a person who still watches Full House reruns on the regular and swoons over Uncle Jesse, the concept seemed cute enough and it was a definite excuse to thank the Greek gods for blessing us with someone as good looking as Stamos.

So the fall rolled around, and I checked out the premiere episode. My hopes weren't enormously high, given my distaste for cheesy sitcom humor (except for my favorite family that hugs, the Tanners, of course), but it was alright. The jokes were enough to get a chuckle out of me, and it was pretty fun to see Stamos with a new adorable toddler since those Olsen twins aren't having any of it these days. The first half of Season 1 provided some easy laughs, fluffy plot points, and sappy moral compass moments that even Danny Tanner would tip his hat to. Plus, y'know, Stamos.

Now that the show is back from its holiday hiatus, I worry that it's on the brink of not surviving past Season 1. To further my fears, Stamos recently appeared on The Tonight Show with Jimmy Fallon (mostly to promote Fuller House, which seems like it has plenty of momentum among fans) and he asked Fallon how to get people to watch Grandfathered. I felt instantly bad, because he said it's the show he always dreamed of doing, and something about seeing him pandering to the audience to watch his show made me feel guilty even though I actually do watch it. Paired with the fact that Bob Saget and Dave Coulier keep guest-starring, I fear these gimmicks are a way to keep the show from getting scrapped.

So, here's why you should be watching Grandfathered if you aren't already, or why you should continue if you started and gave up hope. I promise that it is getting better.

Most people know Josh Peck from his childhood role of Josh on Nickelodeon's Drake & Josh, but I'm here to tell you that he should be your newest crush. I first fell for him in the 2008 indie movie The Wackness (also starring Mary-Kate Olsen as a major hippie stoner) and he's a seriously hilarious dude. I follow him on Twitter, Instagram, and Snapchat, and you should too. He's low-key one of the funniest people on the planet, and his role as Stamos' character Jimmy's son Gerald will make you fall more in love with him.

It's Sappy, But It Has Heart

It's true that this show definitely rivals that other family sitcom Stamos once starred in, but the characters manage to navigate the weird world of family dynamics (between Gerald's new found relationship with Jimmy, and his attempts to date his daughter's mom, Vanessa) with biting humor and grace all at once. Families are ridiculously complicated, and Jimmy unwittingly finds himself smack in the middle of those complications — it will make you feel less bad about whatever family drama you've got going on (and we all do).

It's A Millennial's Dream (Or Nightmare)

Gerald plays a twenty-something who had a kid with a woman he wasn't seriously dating, and now he's jobless and with a child. He should be the stereotypical loser man child, but instead you can't help but root for him. He's majorly in love with Vanessa, and watching him trying to figure out how to portray himself as a love interest instead of a co-parent is sweet. Jimmy plays a bachelor who never had much of an interest in settling down, until he decides he'd like to find the Amal Clooney to his George. Also, there are sexting lessons and 3D printers. Does it make for timeless television? No, but we still laugh at video store and Baywatch jokes on Friends all these years later. Changes in technology tend to override the humor in sitcoms, when done well.

It's More Than Its Cliches

Grandfathered seemed to lay out all its cards early on, setting the scene for a rekindled romance with Gerald's mom Sara (played by the amazing Paget Brewster) and casting Jimmy as the "playboy bachelor turned good guy," but I think the show has plenty of time to move past cliched plot points and evolve into something great. If given the chance, there will be more time to develop the characters beyond the surface and delve deeper. I hope it's given life and a second season for that reason alone. Plus, how many shows can truly say they had great first seasons (excluding you, American Horror Story)? — most sitcoms take time to find their groove.

The Baby Is Adorable

Alright, so this one is definitely a bit superficial, but baby Edie is the cutest thing ever, and it's worth tuning in for her alone. We've seen Stamos' chemistry with children in the past, and this is no different. They have some of the sweetest moments on the show. Edie is a scene-stealer, which is exactly why she was made the centerpiece of the show. The producers aren't dumb, and even though I'm onto their master plan, I can't help but love her.

Grandfathered is worth a deeper look if you've written it off, and I really think it has potential to grow as time goes on. So please, execs, hear me out: don't cancel it. It could be a sleeper hit. I mean, did critics love Full House? Not at first... and look at how that ended... the show lives on, everywhere you look... (sorry, had to!).