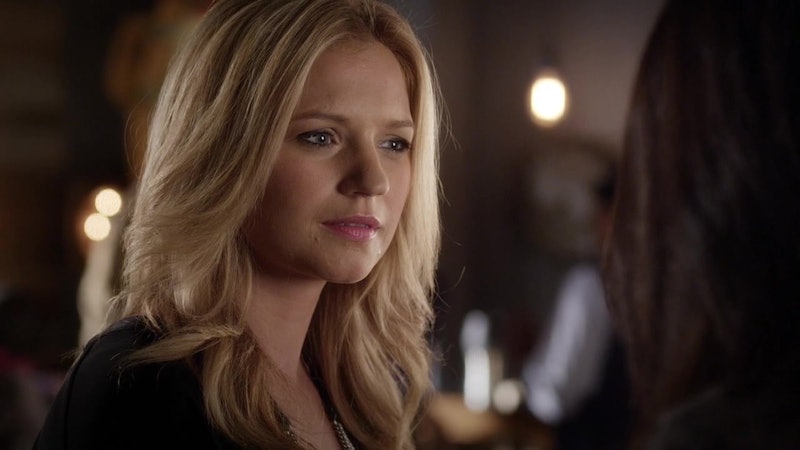 Oh, I should have known. I should have known that Charlotte DiLaurentis would die almost immediately in Pretty Little Liars Season 6B. Mere hours after she was released from the mental hospital where she'd been held for the past five years (not Radley, because that place was turned into a hotel), Charlotte was found dead, rose in hand, next to the church in Rosewood. I know — I was just as shocked as you were. While many thought that Charlotte had killed herself and jumped off the roof, Hot Cop Lorenzo cornered the Liars after her funeral and said that she was dead before she hit the ground. That raises a pretty huge question: Who killed Charlotte on Pretty Little Liars ?

At the beginning of the episode, Hanna, Spencer, Emily, and Mona all testified to let Charlotte out of the mental hospital Aria found herself too scared to allow Charlotte to be released. Did they do it because they wanted to? No. They mostly did it because Ali had asked them to. Both Ali and Charlotte’s doctors all agreed that she was better now, so why should she not live a normal life as a member of Ali’s family again? Unfortunately for Ali, her plans of building a life with her sister weren’t meant to be. She just can’t win, can she?

So who killed Charlotte? Right now, PLL would have us believe Aria did because she was the only Liar who objected to Charlotte’s release. It’s never that simple in Rosewood, though. It’s way too easy to assume it was Aria. What about Ezra? Ezra is hurting — his girlfriend Nicole was kidnapped in South America (seriously), and he’s been in a bad way since that tragedy. The "5 Years Forward" special made it seem like he now has issues with alcohol, and he never liked CeCe (which is how he first knew Charlotte) or Ali, so this latest incident in his life could have pushed him to the brink. Perhaps he blames Charlotte for everything bad that’s happened in his life. After all, he could have been happy with Aria had Charlotte not came in and mucked it all up.

While we’ll have to wait and see (possibly until Season 20) who killed Charlotte, for now, Ezra certainly has the means and the motives. For more Pretty Little Liars theories, check out Bustle's podcast Taking This One To The Grave.