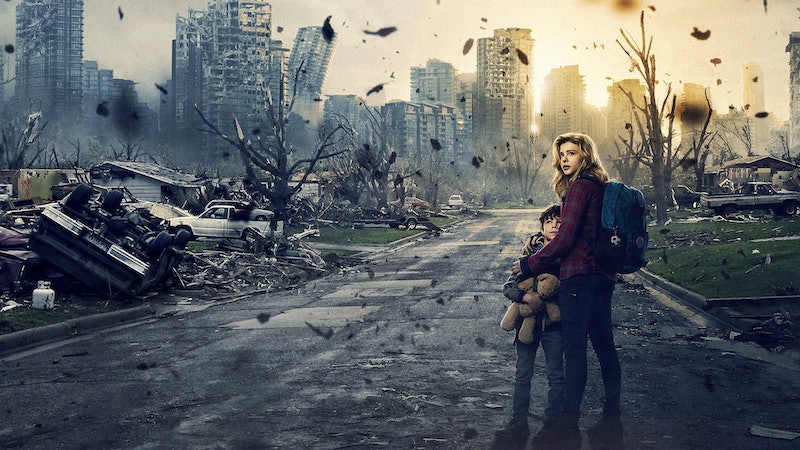 Has the conclusion of The Hunger Games series left a Katniss Everdeen-shaped hole in your life? Meet Cassie Sullivan, the protagonist of the upcoming sci-fi release The 5th Wave . Embodied by the seemingly ubiquitous Chloë Grace Moretz, Cassie is the next YA heroine to be tested on screen. A survivor of a multi-phase attack by an alien race, the teenager is desperate to retrieve her little brother from a nefarious training camp for human children. The film opens on Jan. 22 and could jump start a cultural phenomenon in the vein of HG or the Twilight series. The novel that it's based on is a part of an intended trilogy, so if audiences bite on the film, then multiple 5th Wave sequels could be in its future.

The 5th Wave novel was penned by Rick Yancey, a former IRS employee turned science fiction/fantasy author. It was published in May 2013 and quickly found its audience. That audience, like those for other crossover successes, is comprised by adult readers too. "Who cares what shelf you find it on?" Entertainment Weekly wrote in its "A" review of the book. "Just read it." The 5th Wave became a New York Times bestseller and has been translated into over 30 languages. The release of the second book in the series was heralded with a trailer, a trend that acknowledges the direct pipeline from successful printing to big-budget screen adaptation for any well-written, post-apocalyptic novel with a spunky teen lead or two.

The Infinite Sea picks up where the first novel and The 5th Wave film leave off, so I won't talk plot here. The sequel hit bookstores in September 2014 and stoked interest again in the survival story of Cassie and her compatriots. The 5th Wave fans are still awaiting the trilogy's conclusion, but at least it has a title. The Last Star is scheduled to hit shelves this May.

Sony snatched up the rights to The 5th Wave trilogy before there was even a trilogy to speak of. Entertainment Weekly reported in May 2013 that the studio was already intending to produce a series of 5th Wave films, even though only one of the novels was complete at that point. (I hesitate to guess that the plan is to release three films for three books, since film versions of Harry Potter and The Hunger Games set the precedent for squeezing a couple of huge box office takes out of one novel.)

The 5th Wave is deeper than other series that have been similarly categorized, at least according to Moretz. Talking to MTV News before she began shooting the film, the actress praised the quality of the material and its intense, adult themes. "It's why I haven't done any of these YA projects until now," she said. "None of them have been exciting to me." Watch the rest of the interview below. It includes some warranted flailing over co-star Liev Schreiber's very cool wife Naomi Watts.

Basically, The 5th Wave would have to majorly tank at the box office to destroy plans for a cinematic series. With Moretz's growing star power and a loyal reading audience ready to mobilize, the odds of that outcome are slim.