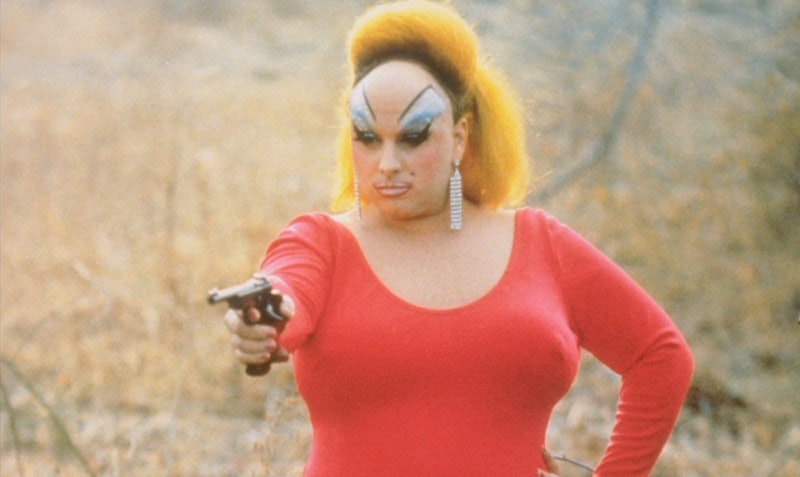 Out of all of my alternative heroes growing up, Divine — aka Harris Glen Milstead — was definitely among one of the weirdest. Spending my teen years marathoning John Waters movies and coming to terms with my own queer and oddball identity, this '70s drag queen helped me understand a lot more about myself than any boy band ever would. Although I was far from fat at the time, and "body positive" wasn't even a term yet, Divine helped me love myself and my specific brand of glittery peculiarity all the same.

As I mourn the loss of my biggest hero, David Bowie, I can't help but wish we'd had some of my other idols for just as long. I'd love to have seen Divine's Drag Race or hear Freddie Mercury produce music during my lifetime. Instead, I can only look back to their legacy with admiration, appreciation, and a few tears in my eyes (not enough to mess up my gold eyeshadow, though).

These pictures capture the essence of Divine in a way that otherwise only her filmography could. Her larger than life character was always utilized to the best of its ability by John Waters; and getting to see how Divine was outside of the cinema, there's no doubt that this character was so much more than just a gimmick, but a true icon. Here are some of my favorite throwback photos of the queen.

If this isn't an iconic image, then I don't know what is. When I think of Divine, this is the shot that immediately springs to mind. That hair and eyebrow combination is everything.

John Waters was the self-proclaimed "pope of trash," and Divine was his muse. Seeing her in this shiny gown, I cannot help but wish I'd been able to be her best friend.

Before Divine came Harris Glen Milstead. The man behind all that filth and glamour, that smile is always recognizable and fabulous no matter how much (or how little) makeup is around it.

When Divine sported this hair, it was made impossibly obvious that she was the inspiration for The Little Mermaid's Ursula.

Although Divine rocked being blonde like no other, the same should be said of her black locks.

And even with no hair, Divine killed it.

Grace Jones arguably deserves an entire list of iconic moments of her own, but this spaghetti-strapped party looks like the best event that has ever happened, and ever will happen. Divine and Jones' interactions give me total modern day The Creation Of Adam vibes.

As Edna Turnblad, Divine simply killed it. According to Wikipedia (so I guess we might never know for sure), John Waters originally wanted the queen to star as both Edna and her daughter Tracy Turnblad. But the studio allegedly shot the idea down.

Divine's style is one I can only hope to emulate in my own life. She's definitely the founder of the proudly trashy and tacky aesthetic.

If this is what heaven looks like, I am all for it.

What even is this look? The trashy aesthetic is still there, but in such an effortlessly kitsch way. There is no denying the effortless glam of the queen that was Divine.

If you're not running away to immediately watch a Divine film right now, then I haven't done my job correctly. But if you are? I hope you don't cry too much as you ponder what this icon could've been.