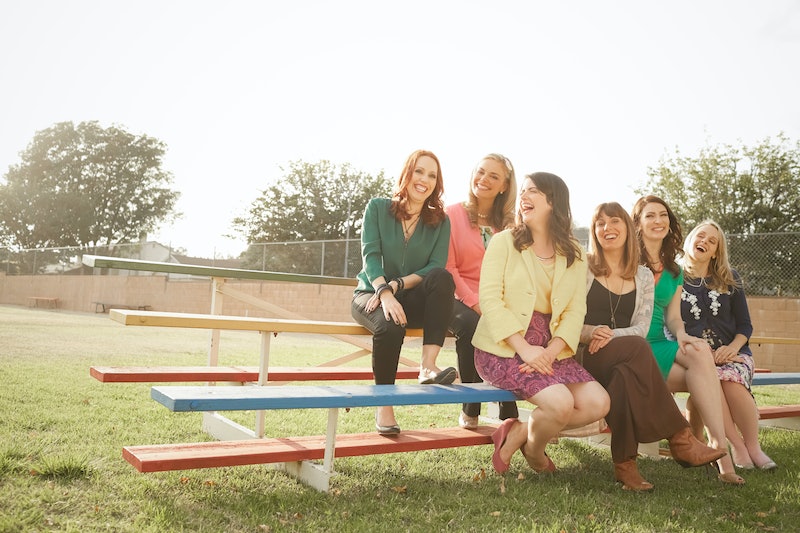 Now that Younger is certifiably a hit, TVLand is hoping to expand with a new comedy starring funny women called Teachers, which is executive produced by Allison Brie, who you may know from Community and Mad Men, as well as former Key And Peele writers Jay Martel and Ian Roberts. According to TVLand's official description, the show is about "six elementary school teachers who are trying to mold the minds and lives of America’s youth, even though they don’t really seem to have their own lives together at all." What's best, the cast of TVLand's Teachers is a group of women who already have a lot of history.

When you look down at the list of cast members, you may think "...wait a gosh darn second. These actresses all have variations on the same name. Is this some kind of joke?" It's not a joke, and it's not a regional production of the musical Titanic (which has a trio of Third Class characters all named Kate, because Ireland). The cast is made up of the improv team The Katydids which originated in Chicago, and the show is based on their webseries. They all serve as writers on the show as well.

So these gals are a pretty big deal in the improv world, but are almost complete unknowns to fans of television and movies. Before Teachers premiers, let me familiarize you with their faces and the characters they play.

Barlow plays the hippie of the bunch.

Ms. Snap is, as you may be able to tell by the picture, described as narcissistic.

This character is described as non-traditional, and worked with Allison Brie before on the film The Disaster Artist.

Miss Watson's character is described as both "a hopeless romantic" and Type A, which already sounds like comedy material.

Ms. Bennigan (it's just now striking me how a show about teachers means most of them will be referred to by their last names) is a bit naive, and has a major crush on this Hot Dad.

Finally, Mrs. Adler is the darkest of the bunch, in attitude at least. She's kind of like an "ex" Goth, and her husband's in a band. Here she is pictured with Alison Brie, who guest stars in the pilot episode as Deb's former bully... who's leading an anti-bullying workshop at the school. As someone who has taught and worked with teachers for years, let me tell you, there is a lot of drama and a lot of laughs to be had about this kind of world. A cast of unknown ladies who clearly have great chemistry is going to make Teachers a show you won't want to miss.