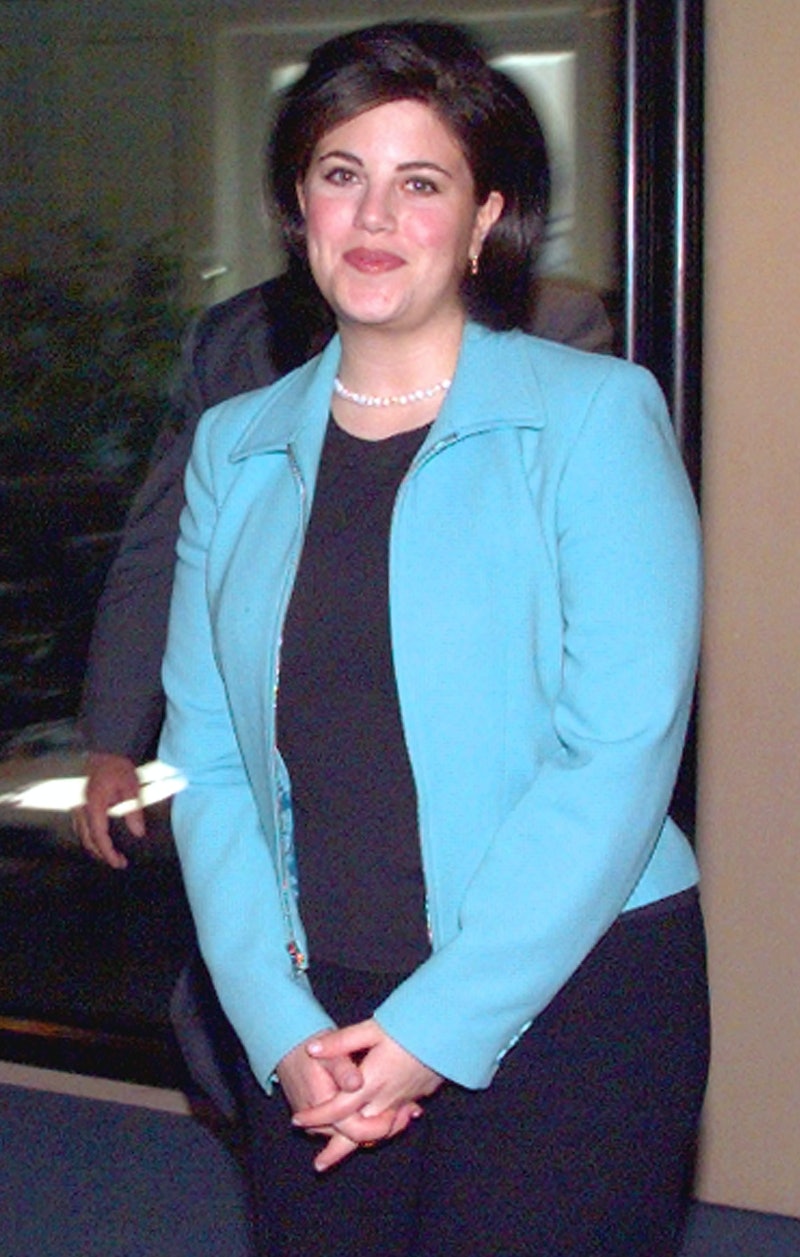 1998, the year when the vast majority of the Clinton Lewinsky scandal unfolded, was also the year I lost my virginity. I won't say that's the reason I've always felt a powerful identification with Monica Lewinsky, although the fact that I began my sex life at the same exact moment that Monica's was being broadcast and speculated about every night on the news probably shouldn't be underestimated. But I had a soft spot for Monica since she first entered the public consciousness, 18 years ago this month — when she was just a former White House intern whose supposed affair with the president was being whispered about in tabloids, and I was just a virgin (who had done some hand stuff, but still). I liked her at first because she reminded me a little of myself — by which I mean she was young, brunette, Jewish, not stick-thin, had dabbled in theater. You didn't catch a lot of people like us on CNN in 1998. So when I saw her, I paid attention.

And the more I learned about Monica Lewinsky, the more attention I paid. We remember the '90s as the girl power decade now —Buffy the Vampire Slayer! Thelma And Louise! Queen Latifah! The Vagina Monologues! Those first few Sleater Kinney albums! — but I remember the years leading up to the Clinton Lewinsky scandal as years where most women in news headlines were there because they had been murdered —like Nicole Brown Simpson (murdered in 1994) or JonBenet Ramsey (murdered in 1996) — or otherwise savaged. I remember constant coverage of stories about Lorena Bobbitt, who cut off her husband's penis (after what she later alleged was years of physical and sexual abuse) in 1993, or figure skater Nancy Kerrigan, who was attacked by the estranged husband of fellow Olympic hopeful Tonya Harding in 1994. Even in the alt-rock circles I frequented in the late '90s, it was standard to hear people claim that Courtney Love had driven Kurt Cobain to suicide by being a pain in the ass. These are imperfect memories of the era, of course, but it felt at the time that women only captured the public consciousness when there was violence involved. It felt like a relief, even a novelty, for the nation to be transfixed by a woman simply because she'd engaged in consensual sex (sex that was, obviously, ethically and professionally questionable — a fact that went completely over my head at the time).

But there was more to it than that, of course. When Monica Lewinsky was carted unwillingly up onto the cultural stage, we all projected our own ideas about who she was or what she stood for onto her — which was easy since, as she had become famous instantly and by accident, she didn't really have a speech prepared. Many people projected awful things onto Monica — assumed that she was vapid, morally bankrupt, someone who used her sexuality to manipulate others. These were the people who wore the buttons with Monica's face on them that said "I'm voting Republican ... the Democrats left a bad taste in my mouth" or thought that dressing as Bill Clinton wielding a cigar was a snappy Halloween costume.

Those of us who loved her also loved her as a symbol we could charge with whatever meaning we wanted. Or at least, I did. Monica showed up on the national stage just as I realized I wanted my sexuality to be a big part of my own story, so her experience felt instructional to me. As far as I could tell, most people hated Monica just for being sexual — though people grumbled that they were really angry about the value of monogamy or the security of state secrets, I just saw her dealing with the kind of anger and hypocrisy that the "easy girls" in my town had to deal with, writ large. I looked up to her the way I looked up to those girls who walked with their heads held high, who didn't give a shit if people snickered at them at the mall, because they were doing exactly what they wanted with their bodies, societal expectations be damned. Monica could have run away to another continent or hidden in another country or, god forbid, hurt herself. I respected her for doing none of those things.

I looked at Monica and imagined someone with a life similar to mine — where your own beliefs and hopes were cast out the window by a culture that demanded that you eschew passion and go for safety. And instead, she went out and fucked the president. I loved Monica. I thought she was punk rock.

And maybe, in that moment, it was a little rebellious to defend her as a romantic, a wild woman who didn't deserve to be punished for going after what she wanted, considering the way everyone was talking about her. White House aide Sidney Blumenthal described Lewinsky, in the midst of the scandal, as "a predatory and unstable sexually demanding young woman," which is horrifying in its callousness, but at least makes sense in that the White House had a lot on the line. But what did everyone else have on the line, to make talking about her in such degrading ways acceptable? In a 1998 New York Observer article, acclaimed sex writer Nancy Friday said of Lewinsky's future career prospects, "She can rent out her mouth." As late as 2003, Alessandra Stanley of the New York Times referred to Lewinsky as "dallying with President Bill Clinton like a saucy Edwardian upstairs maid."

You couldn't even count on Ms. Magazine for what we'd now consider a supportive reaction — a trio of op-eds on Lewinsky published in the June 1999 issue, which contained reactions that ran the gamut from Susan Jane Gilman's claim that "Lewinsky used her sexuality inappropriately...[and w]hat can a feminist say about a young woman who feels so entitled that she sees herself as being on equal footing with the president?" to Susie Bright referring to her as "our living Helen of Troy." Even a piece by Abiola Wendy Abrams praising Lewinsky chided, "You have the global ear, now do something with it!" None of us stopped to consider if Monica was a real human being, let alone one who had wanted the world's ear in the first place. As Lewinsky noted in her 2014 Vanity Fair piece, "It may surprise you to learn that I’m actually a person."

Looking back on it now, I think we talked about Monica Lewinsky the way we did at the time — even those of us who supported her— because we didn't have the language or understanding that we do now. The vast majority of us didn't know what "slut-shaming" was, or why we would want to avoid it. We didn't have an understanding of consent that included questions about power balance. Monica Lewinsky has always insisted her relationship with Bill Clinton was completely consensual, and I believe her — but I still think we asked the wrong questions of Monica. We just wanted to know how she could dare do the things that she did, and painted her as a harlot or a heroine based on our personal values — but whether we thought it was awful or awesome, we assumed it was decision she had made with no outside influence, just a pure expression of whatever was in her heart. Back then, it felt like people took it for granted that a man's power was an aphrodisiac that women couldn't resist and left it at that, never thinking about the various ways that power blurs the edges, sometimes makes us not completely sure about what we're saying yes to.

I'd like to believe that if we had something similar to the Clinton Lewinsky scandal occur today, we'd handle it differently. I'd like to believe we'd respect a woman's sexual agency, but also say, "This woman can't even rent a car. She's still a kid, in many ways. We shouldn't be placing the brunt of this on her shoulders, no matter what our specific reaction is." I'd like to believe we'd spend more time asking ourselves why a 50-year-old president was compelled to sleep with a powerless intern young enough to be his daughter (and not accept "Because that's how men are!" as a satisfying answer). But really, I'd like to believe that we wouldn't invest so much time and energy sapping the woman of her own identity, filling her in with our own beliefs, stealing her agency ourselves. No matter what people thought of what he did, Bill Clinton got to stay himself. Monica Lewinsky became whoever we wanted her to be. I hope, today, we'd finally know better.