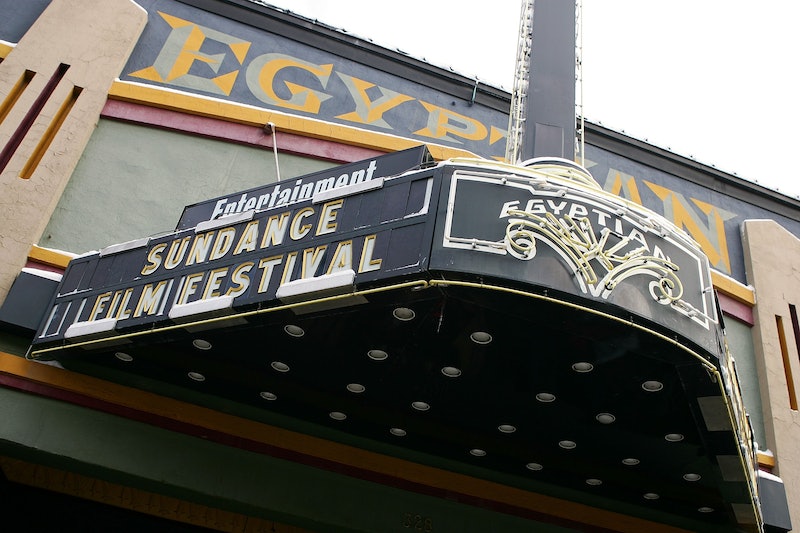 Sundance Film Festival is the place independent cinema makers and lovers of indie film flock to every January. Located in Park City, Utah, and founded by the original Sundance Kid himself, Robert Redford, the festival is home to many of the year's best hidden treasures. The 2015 festival gave us Oscar-nominated Brooklyn, which could take home several awards at the Oscars this February. The year before that was Whiplash, which was also nominated for Academy Awards. But if you've never been to Sundance Film Festival before, your idea of what it is like may stem from celebrity red carpet interviews given at the fest, or a particularly glamorous episode of Entourage titled, "The Sundance Kids."

Sure, there are certain truths about Sundance we all recognize: It's the largest independent film festival in America, it takes place in Utah every January, it's freezing outside, and there are hoards of celebrities in attendance — all true. But having gone to Sundance Film Festival for the first time last year, I can assure that there are certain expectations of the wintery festival that simply aren't accurate in reality. Did I make snow angels with Brie Larson after sipping hot chocolate with James Franco? Not exactly.

Here are seven Sundance Film Festival expectations that play out a little differently in real life.

While hundreds of movies come to Sundance Film Festival each year, it is impossible to see them all. If you're lucky enough to attend for the full 10 days, and can somehow manage, let's say, three movies a day, you'll wind up seeing a mind-blowing 30 films — which hey, is nothing to be ashamed of.

Half the fun (and frustration) of attending Sundance Film Festival is not knowing which films choose. Many of these films have never been screened before, very few of them have trailers to view, which leaves audiences using their instinct — and the provided one sentence description of the plot — to make the tough choices.

2. There's An Attractive Guy/Girl Waiting In Every Hot Tub

Because Sundance Film Festival is expectedly freezing cold every winter, many condos or rentals come equipped with hot tubs. It's a real treat — that is, if you're willing to walk from the warmth of standing in front of the fireplace out into the snow (in your swimsuit) to get to said hot tub.

In the aforementioned Entourage episode, Vince and E walk to their hot tub to find two scantily clad women awaiting them. If this happens to you, I'd lock all the doors and call 911 ASAP.

Well, this isn't totally outside the realm of possibility. There are certainly more celebrities in Park City, Utah during the last two weeks of January then any other time of the year (I'd imagine), but getting into a party with Sundance's darlings might be tough. But if you hang out around Main Street at night time on the weekends, you're bound to see celebrities entering and exiting private parties.

In the episode of Entourage where the gang goes to Sundance, E makes an incredible connection in the Salt Lake City airport bathroom that helps Vince land the role of a lifetime. This is straight up crazy. Hollywood execs have better things to do than make small talk with strangers peeing one urinal over. Of course, you might meet someone of importance at a screening or after party, but keep in mind these big shots probably aren't utilizing Park City's public transportation or standing in line waiting for their next screening — two places where us common folk will spend a lot of time.

5. Spontaneous Snowball Fights Will Break Out At Any Moment

It's absolutely freezing in Park City in January. Those who come to the fest are usually looking to get inside the nearest restaurant or theater ASAP. All I know is that if I was hit in the head by an incoming snowball without warning, I'd be pretty pissed. Brr.

6. The Town Is Run By Mormons

There are a lot of Mormons who live in Utah. This is a fact. According to MormonWiki.com Utah has the highest population of practicing Mormons anywhere. And while this may be true, a lot of people who aren't Mormon (at least, I have no reason to believe they are Mormon) flock to the city during Sundance from all over the world. The festival itself feels quite diverse in its variety of people.

During the Sundance Entourage episode, the boys poke fun at the dense Mormon culture. "Why don't you go after a Mormon girl? They're all over the place here. Besides, everyone knows they know how to treat their men right. They're like Catholic girls times a hundred," Turtle says to the group. E responds, "Do you think the night before a Mormon wedding a guy says, 'How am I gonna sleep with the same eight women for the rest of my life?'"

Sitting in movie theaters all day with one hand in a bucket of buttery popcorn and the other around a candy bar will certainly help pack on the pounds. But unless you're being air lifted from venue to venue, chances are you'll work off the extra calories (if you choose to indulge in eating junk food) walking to your next location. The high altitude also makes walking up hills harder if you're not used to mountain living, so you can thank Sundance for your newly defined glutes.