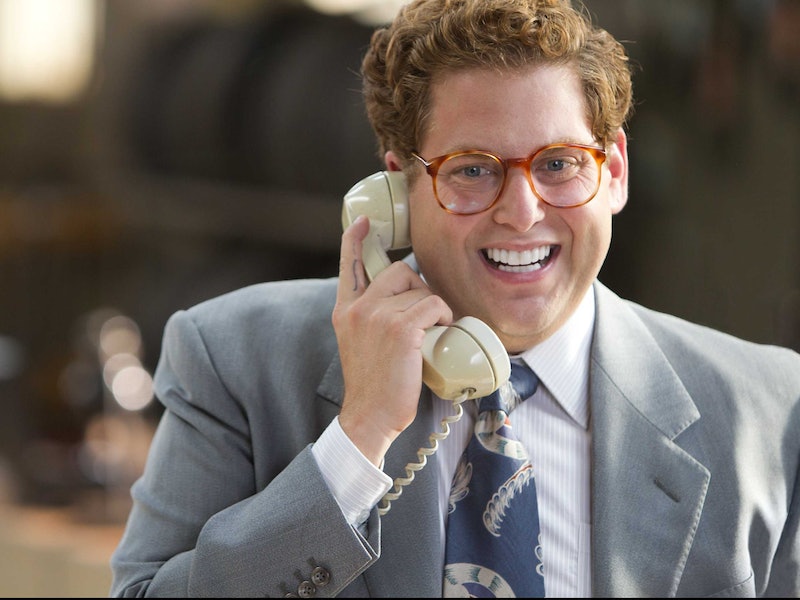 I don't know about you, but it was really hard for me to pay attention during The Wolf of Wall Street . Not because of the drug use, violence, or stripper scenes, though — because of Jonah Hill's fake teeth. On Thursday, Jonah Hill was on Late Night with Jimmy Fallon and finally spoke out about those frightening and blindingly white veneers he wore as Donnie Azoff in the movie. Getting Azoff's dialect down perfectly took some serious work, especially with his fake teeth. Hill said he couldn't exactly "go out to Starbucks" and speak to people just to practice.

"I had these giant fake teeth, these huge veneers, and I had a lisp when I put them in," he says. "So I had to get rid of the lisp and work on my accent and everything. No one in my life would speak to me on the phone, but [the film's] acting and dialect coach said I had to put the veneers in and talk for an hour and a half each day to practice."

Since nobody would talk to Hill on the phone, he came up with a wonderfully weird way to rehearse.

"I would call, like, Target and Best Buy as Donnie, and I would start asking them about the different appliances. I used to call this one Best Buy in Honolulu...," says Hill. "They were super friendly. They’d stay on the phone with me for like three hours."

If only the salespeople in Honolulu knew that it was Jonah Hill rehearsing for an Oscar-nominated film on the other line, and not some weirdo with a lisp who was considering buying a computer one day and a refrigerator the next. However, Hill did promise to give a shout-out to all the Best Buy employees in his acceptance speech if he wins Best Actor in a Supporting Role — game on, Jacqueline Bisset.

You can watch Hill's interview with Fallon below: