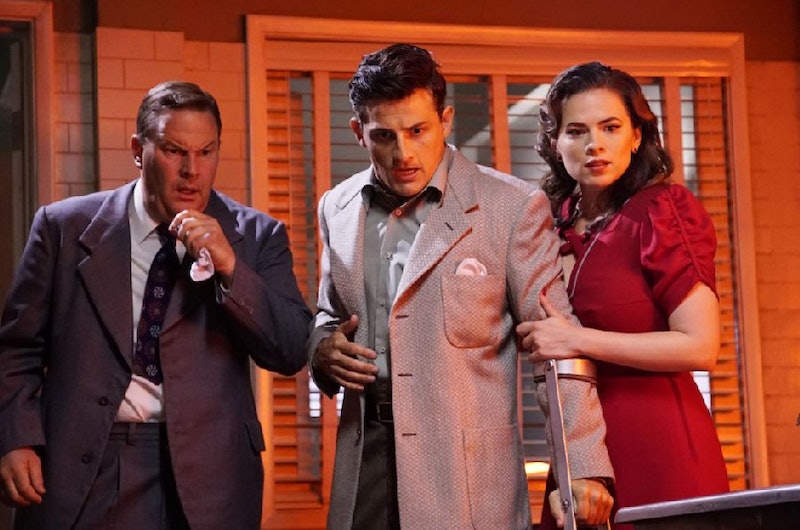 There was much rejoicing in my house when ABC announced that Agent Carter would return a second season of pre-S.H.I.E.L.D. sleuthing. I've been longing for the show's return for what feels like forever, but every sneak peek I've seen previews a batch of episodes that will have absolutely been worth the wait. East Coast gal Peggy Carter is moving to the West Coast this year; the new season is set in Los Angeles, where the agent and former New York colleague Daniel Sousa will be investigating a murder that leads them to an organization known as Isodyne Energy. In its first season, Agent Carter kept observant Marvel fans entertained with references both to Peggy's past (Captain America: The First Avenger) and to household name heroes and villains that come along later. If Isodyne interests the Strategic Scientific Reserve, it has to be a dangerous entity with the power to cause a lot of chaos. Marvel specializes in those.

As a company though, Isodyne Energy is a new fictional creation. That name has never appeared in a Marvel property until Agent Carter. The inspiration for Isodyne Energy lies in American history, not comic book history. Agent Carter showrunner Michele Fazekas told Comic Book Resources where the idea for the corporation came from.

Basically, Isodyne is a company that we invented based in part on real life companies ... all of which were in LA in the '40s, and were developing the space program and were developing nukes ... What you'll learn is [Isodyne] were involved in the nuclear testing out in the desert when they were testing the — at the time they were calling it the atom bomb — and one of these tests didn't go as expected.

And in comic book lore, a botched nuclear test never ends with a shrug and a "back to the drawing board!" The fictional Isodyne certainly wants to keep what it accidentally created under wraps and especially away from the prying eyes of the SSR. I expect that, as the season goes on, Peggy and the audience will find that a larger entity (a foreign government, perhaps) is directing Isodyne Energy's operations. There's always someone pulling the strings. In this clip from the second season premiere, Sousa and Carter use their wit and wiles to gain access to Isodyne.

Before Isodyne Energy had been named in a Marvel show, however, other familiar characters had been dealing with the fallout. The result of the unsuccessful atom bomb test is a material that Isodyne calls Zero Matter. The other name it goes by is Darkforce: the substance that turned Marcus Daniels into Blackout in the first season of Agents Of S.H.I.E.L.D. Darkforce touches many corners of the Marvel universe, which is why the Agent Carter team found its origin so interesting. Fazekas told Comic Book Resources what the dynamic nature of Zero Matter/Darkforce means to the show.

Fazekas even referred to Darkforce as "our tie-in to the Doctor Strange universe," which is just as vague as it is exciting, since there's been no official word on how Darkforce will play into that story. But Peggy Carter is the well from which so much of modern day Marvel heroes spring; it's really cool to see her continue to be recognized as such in the feature films. Could Hayley Atwell cameo in the upcoming Doctor Strange movie like she did in Ant-Man? I'm always in for a surprise Carter-bomb.

One thing's for sure, if Peggy's on the case, Agent Carter will get to the bottom of Isodyne Energy in no time.