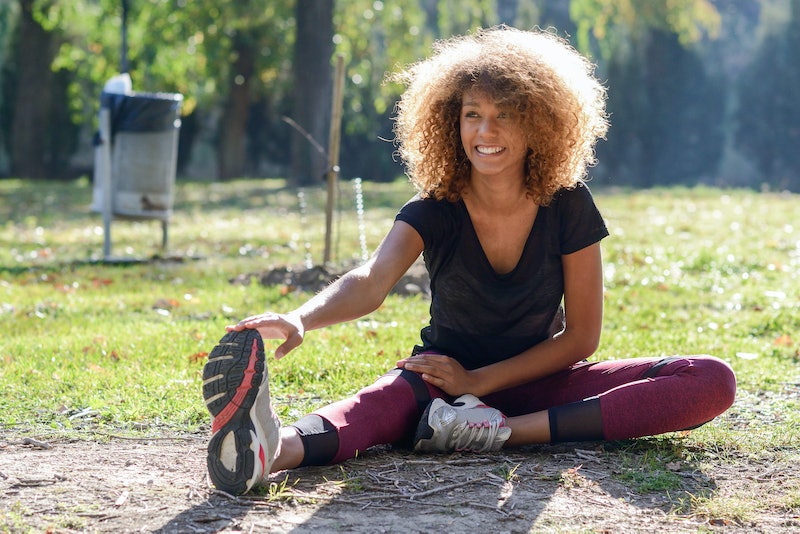 Kicking off an exercise routine for the first time is one of the hardest things to do. We see fitness around us in so many different ways — infomercials for new ab gadgets, billboards of people running in packs, and fashion spreads of yogis. While it's great to be surrounded by so much motivation, it doesn't leave us with many instructions on how to get started. And we all have to start somewhere.

As a yoga teacher and a person who has been in the fitness world for a long time, I've seen a lot of people crash and burn not long after they've started a new workout regimen. I've also witnessed a lot of success stories too, of people whose lives changed for the better because they began the right way. Not only are there many physical benefits of kicking off your exercise with a positive bang, but if you pull it off, your workout becomes anything but an obligatory, boring activity. I should know — I was in that position of being bored a thousand times before, until I finally found a way to make the workout habit stick.

If you're thinking about taking up exercise on a more regular basis, set yourself up for success by avoiding these eight things people usually get wrong when they first start exercising.

1. They Exercise Too Often

Chief exercise psychologist for the American Council on Exercise Cedric Bryant told WebMD that when people schedule too many workouts a week when they first start, it's extremely difficult to maintain a routine. It's likely that they lose interest very quickly and quit altogether not long after. It's recommended you get your blood pumping a couple of times a week at the beginning, even if you feel like you want to do more, just to get your body slowly adjusted to the new changes. You don't need to be in the gym every single day (nobody does, really), especially if you don't want to feel utterly exhausted by the time the weekend hits.

It's easy to get so pumped up about a new workout that many people go too hard way too soon. Dr. Len Kravitz, an exercise scientist, told the Huffington Post that this is a very common mistake among first-timers, and it rarely ends in anything good. You could potentially injure yourself, which, trust me, is never a fun thing, or you could get so burnt out that you swear off exercising forever.

The goal is not to see just how high the heart rate can go, or figure out just how quickly you can fatigue those muscles. Take it easy, and commit to gradual progress. Experts suggest beginners start out with moderate exercise, just 30 minutes at a time, and slowly build up from there.

3. They Eat The Wrong Things Before & After Exercising

A little common sense goes a long way when it comes to the delicate relationship between food and exercise. The first rule is to make sure you're replenishing your body with a solid source of protein after you've wiped away the sweat. Think of a peanut butter shake or a veggie omelet. Obviously, stay away from artificial sugars and processed foods at all costs, including the sucrose-packed granola bars that market themselves as nourishing. Finally, keep an eye on those seemingly healthy choices out there that actually aren't that good for you pre-spin class, like hummus or flaxseeds, and eat a complex carb with protein, like peanut butter and toast, before your workout instead.

This rookie mistake is actually one that follows some people throughout their whole lifetime. Unfortunately, it becomes a habit really quickly, and it eventually leads to injury. Without those juicy stretches post-workout, your body can't cool down properly and you could set yourself up for unwanted aches and pains later. Incorporate the simplest of stretches after your exercise routine from the very beginning, and do your best not to skip out on them, even if you're tired from all the work you just did.

5. They Only Do One Kind Of Workout

The body plateaus out much quicker than you might think. Muscles develop tolerance to the movements you do and, before you know it, you're no longer gaining many benefits from the routine. It pays off to mix it up from the very beginning. Switch back and forth between cardio, strength training, and high-intensity interval routines. Keep it interesting with outdoor workouts and different fitness classes. Not only will your body thank you for it — your brain will be grateful that you're not turning exercising into such a tedious endeavor.

6. They Don't Choose A Form Of Exercise They Love

If you forget everything else, remember this: never choose a workout simply because it's trendy. Give it a shot and find out if you actually like it for yourself. For example, if you buy a month-long membership to a barre studio just because you read about the amazing benefits in a magazine and stared at pictures of Natalie Portman circa Black Swan, chances are you won't be happy a week in. Be as picky as you want, but experiment until you find exactly what it is that grabs your attention and keeps it, even if it's the wackiest exercise your friends have ever heard of.

When you keep yourself hydrated, you feel stronger and more motivated, and your heart doesn't have to work as hard to keep up with the rest of your body. You lose a good deal of water when you sweat from exercising, in addition to the normal fluids you get rid of from peeing throughout the day, so it's crucial to drink extra in order to replace it. Shoot for about 20 ounces an hour before the workout, another eight ounces right before you get going, and keep sipping long after it's all said and done.

Everyone works out for different reasons, whether it's to reduce anxiety or train for a half marathon. Without knowing why they choose to exercise, though, may make it impossible to keep it up. Jot down the reasons you're getting your heart rate up, and maybe even maintain a journal of your physical progress and how you're feeling. The more you see the improvements, you'll have a better sense of how far you've come, which will only motivate you to keep going.