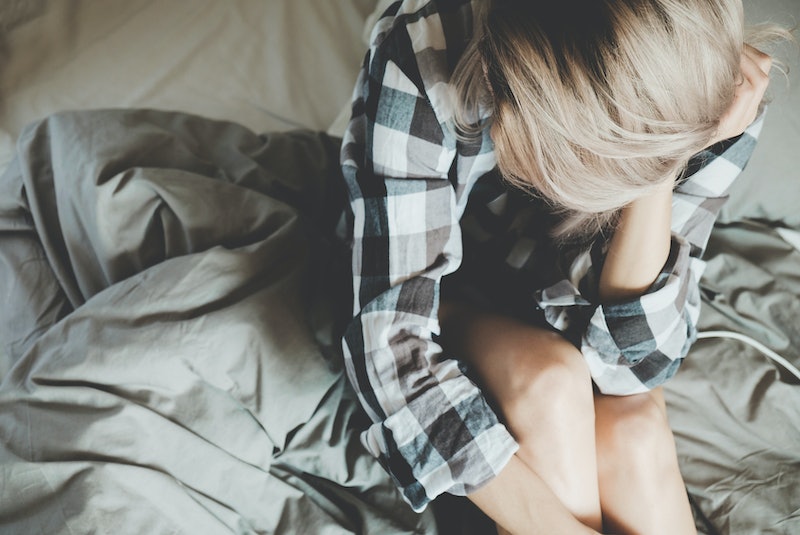 Those of us who are not trying to reproduce, but are sexually active and/or have experienced some kind of birth control failure (shout out to broken condoms) understand that after a pregnancy scare, the arrival of a late period or the evidence of emergency contraception doing its job is the most beautiful instance of relief. The days or weeks before you can accurately take a pregnancy test in order to evaluate your options overflow with stress, anxiety, and panic. Waiting for potential menstruation is like waiting to find out if you still have control over your own body and your own life. It's gutwrenching. But what happens after you get your period, and it turns out you're not pregnant and everything is OK? Can you once again engage in sexual intercourse as you did before the pregnancy scare? Will you be too anxious for fear of the whole terrifying incident repeating itself?

Dr, Jennifer Caudle, Family Physician and Assistant Professor at Rowan University, spoke to Bustle about this kind of anxiety. Dr. Caudle explains that a pregnancy scare is really a type of trauma for a lot of women. Following trauma, a human being is bound to be triggered and made anxious by any stimuli that reminds her of the specific traumatic incident. Dr. Caudle likens this to her own experience after a car accident: "I got into a car accident, and for a while, every time I drove over the area of the bridge where I'd crashed, I tensed up. Similarly, the emotional trauma from a pregnancy scare can cause you to not feel up for sex, if not outright leery of sex."

For some women, this anxiety only manifests itself during sexual activity. Perhaps they only go through the motions of sex while panicking internally; maybe they have to end sex prior to ejaculation, or maybe they begin to cry during intercourse. Some women have to abstain from sex until their anxiety is under control – whether that means going to therapy or changing their birth control method. If a woman is in a partnership while going through this issue, it can start affecting her relationship as these changes in sexual desire disrupt emotional intimacy as well as physical intimacy. Communication and support from both partners is key if the problem is to successfully be worked through.

Some women find that the anxiety not only affects their sexual relationship, but also their relationship outside of the bedroom. You may recoil from the partnership in general if you were fearing the responsibility of a baby with this specific person. Essentially, you had to imagine scenarios with your partner before you were ready to go down that road, so now you are uncomfortable in the relationship.

You should not have to deal with this anxiety in order to have a healthy sex life, and it should not be inducing behavior that negatively affects your partner or your relationship. Often, time is the only thing that will heal the trauma. The more times you personally experience safe sex not ending in pregnancy, the better. Sometimes you'll need therapy to treat an underlying anxiety disorder, and sometimes you'll need to change your birth control or just become more educated about it — science can be very comforting. Go to your gynecologist or to a clinic and make sure you are on the best birth control for your body.

However you need to cope, Dr. Caudle reminds us that the “timeline to get back in the saddle,” or back to sexual activity, “is individual.” She encourages women to still maintain some sort of intimacy while abstaining from sex, if that's what they have chosen to do temporarily. Intercourse may be scary right now, but that doesn't mean that kissing, oral sex, massages, etc. have to be.

“I think the biggest thing that I wish women would know is that it's going to be OK,” Dr. Caudle tells Bustle. “When you're going through trouble as a woman or a person, you want to know you'll be OK. So I am telling you, it's going to be OK. I really want to provide an optimistic message since it can be so scary."

I walked to 10 women talked to us about their pregnancy scares, and how their mental health, sex lives, and relationships were affected by ensuing anxiety.

I abstained from sex for quite a while. Then when we started again, having sex became me waiting for him to come so that I could make sure that no condoms were broken and that everything was OK. Sometimes I would start crying during sex and we'd stop. He'd try to comfort me, but he just couldn't understand. It wasn't his body. We continued using condoms, but I couldn't let him finish inside me. In the end, we broke up. The intimacy in sex was lost and it seeped into the rest of the relationship. It was a painful breakup, but ultimately we couldn't help each other be comfortable after the instance. I still wish that condom had never broken.

The condom broke with my British boyfriend. Being in England, I had no idea how to get Plan B on a Sunday etc. I also have anxiety issues anyways, so I was a mess. I was 'calm' until we managed to get the pill. Then the waiting game started and I broke down crying. I couldn't eat and I just kept wanting to scrape my insides with bleach, but that's impossible. I cried myself to sleep. We didn't have sex for a couple days until I decided I didn't want to be scared of having sex and that having sex is a risk already. We talked about what we would do if I were to get pregnant or how we would deal with it in the future. I think knowing that we immediately took the steps to get Plan B (took it 2.5 hours after the incident) and knowing the statistics of how it works also helped me deal with the anxiety. Science and stuff.

My boyfriend was really helpful. He held me whenever I cried and expressed how he was feeling too (scared, anxious, worried). He let me deal with my emotions but also made sure I knew he was there. He also supported me in expressing that in the end it is my body, which was the first time any guy I've dated has said that. I don't use BC besides condoms for various reasons, so it made me wary of only having one way to avoid pregnancy."

I'm not a fan of birth control. Although I do believe it's possible to gauge whether or not your partner can successfully 'pull out' in time through dialogue prior to sex, I know there is always the risk. I used to waste so much money on pregnancy tests and the Morning-After Pill because even before my period was actually late, I would convince myself I'm possibly pregnant. I know it was stupid, but the anxiety was that bad. I would never bring a child into this world so my anxiety was partly over my cognitive dissonance of being so stupid as to not respect birth control and wanting to have risky sex simultaneously. So I sucked it up and finally got on birth control."

Abstaining, refusing to date, believing every month that I might be pregnant again. Constant generalized anxiety for another potential situation. Time has aided in the anxiety. I do see doctors but I still deal with anxiety like abstaining.

I was anxious so I constantly made sure my contraception was used 100% correctly. My partners were fine with it and also had similar anxieties.

I was extra cautious about properly using condoms and taking my oral birth control. My partner was cautious to wear condoms and was anxious until my period came. He was also more likely to wear a condom sooner in foreplay.I felt good when I got my period and kind of forgot about the scare! And as I got older, my anxiety lessened.

I felt mostly scared and thought about my alternatives (adoption, abortion). In many instances when I'd become nervous, partners were supportive and waited it out with me. In other relationships, men were less supportive and it made the situation harder to cope with. I think emotional support from loved ones is important during such a time.

I got very nervous after sex for a few months because I was convinced I was gonna get pregnant despite being on the pill. At one point, I tried to induce miscarriage despite negative pregnancy tests. After a few months of having sex and being not pregnant each time, the fear subsided. My boyfriend was very confused and I think a little scared I might actually be crazy, or worse — pregnant! He was careful to not scoff when I asked him to wear a condom for extra peace of mind or 'finish' somewhere else.

When it happened to me, I felt a dull ache in my stomach and chest, quickly and quietly projecting into the future and asking myself questions. Would I need to get an abortion? What will my partner say? In the event I am pregnant and HAVE a baby, how will that derail or change my life plans? Following the scare (and the happy realization I was not actually pregnant), sex was off the table for my partner and I. Even kissing or just cuddling gave me a sense of dread. Even weeks after I found out I was NOT pregnant, I still felt the dread of what 'could have been.' We did not get past 'hug' base for a good couple of months.

During the 'scare' part of my pregnancy scare, my partner took a calm, even approach because he understood that I was the one who needed to process everything. I was the one waiting anxiously for my next period and driving to the drugstore to buy a pregnancy test. I was the one mentally flipping through versions of my future that involved an unwanted pregnancy. Ultimately, he was great in the moment. However, once I demanded that we use two forms of birth control, he seemed to not truly understand my paranoia. He obliged, of course, but I always feel like he has a layer of doubt regarding the validity of my anxiety. Honestly, I do not believe males can ever understand what a pregnancy scare is like, despite their best efforts to be sympathetic.

Even after the emergency contraception worked and I began using a new, more effective method of birth control, I had to get my period two more times before I could be fully relaxed during sex. I completely abstained for about a week, but I communicated with my partner about my anxiety the whole time, and he understood it and supported my choice. He also knew this was temporary, but that it was what I needed at the time. Now, I am confident in my birth control, and I am confident that I will get an abortion and take care of my body if I ever do become pregnant before I am ready.