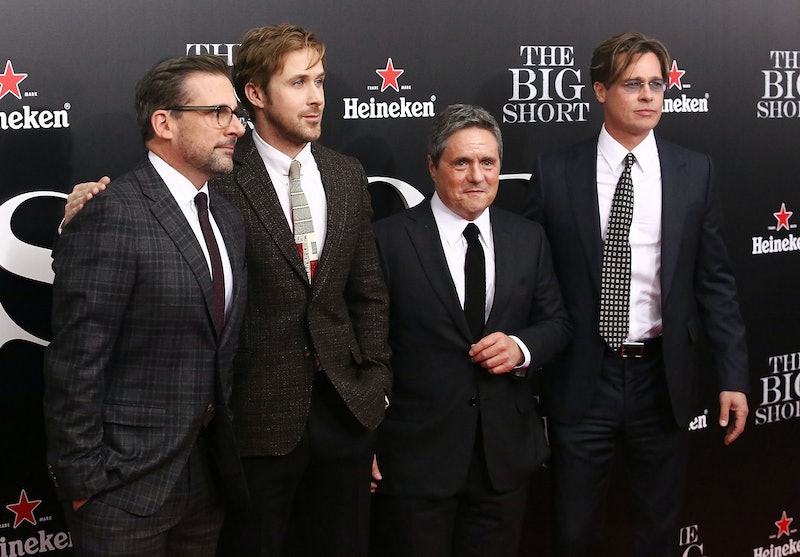 If there's a theme to this year's Oscar contenders, it could be the truth. The films considered by most pundits as the major frontrunners: The Revenant, Spotlight, and The Big Short, are all based on true life stories, and out of those films, The Big Short may have gone through the greatest lengths to try and match up the looks of its actors with the real people they were based on. So how did they do? How do The Big Short actors compare to the real people?

First of all, it's worth noting that The Big Short doesn't directly depict all of its characters. Besides Dr. Michael Burry, played by Christian Bale, most of the other characters underwent name changes for the film. Steve Carrell plays Mark Baum in the film, but is actually based on Steve Eisman; Ryan Gosling is Jared Vennett, who is a composite for Greg Lippman; and Brad Pitt is Ben Rickert, who is standing in for Ben Hockett. But they still wanted to look like their inspirations, pseudonym or not. One of the most accurate things about their portrayals is their hair, which was designed to mimic the 'dos of the men they were playing, none of whom are considered style icons. "The hair is their hair," The Big Short author, Michael Lewis, told Vulture. "I was shocked by how close, especially the principals, captured the actual people." But do you agree with his assessment? Take a look below at the comparisons to see how the actors from The Big Short stack up against the finance guys they portrayed.

Not only did Bale sport a wig to get Burry's signature look, he even borrowed the real Burry's clothes to wear in the movie for even greater authenticity, according to Vulture.

Square-jawed Gosling makes for a pretty good match for the real Lippmann, and his tightly-permed wig and dark-colored contacts don't hurt either.

It's basically impossible to find an actual photo of Hockett, which could be due to the fact that he's a survivalist who lives a secluded life in the wilderness. But Pitt gained about 20 pounds for the role, and was the only member of the cast to use his real hair and not a wig, opting instead for an intentionally bad haircut. Does he really look like Hockett? I have no idea, but he doesn't look much like Brad Pitt, so that's something.

Overall, the cast did a pretty good job of emulating the real life people who inspired their performances, which is pretty impressive considering that guys like Ryan Gosling and Brad Pitt were able to pass themselves off as mere mortals.

Good job, guys. Oscars all around.

More like this
At 28, Lesley Manville Was Acting, Picketing, & Singing Kate Bush Songs
By Olivia-Anne Cleary
Reese Witherspoon Gave Fans Hope For 'Legally Blonde 3' After This Surprising Movie Inspired Her
By Jake Viswanath
22 Movies On Netflix That Are Perfect For The Whole Family
By Bustle Editors
Everything To Know About Netflix's Marilyn Monroe Movie 'Blonde' Starring Ana De Armas
By Grace Wehniainen
Get Even More From Bustle — Sign Up For The Newsletter