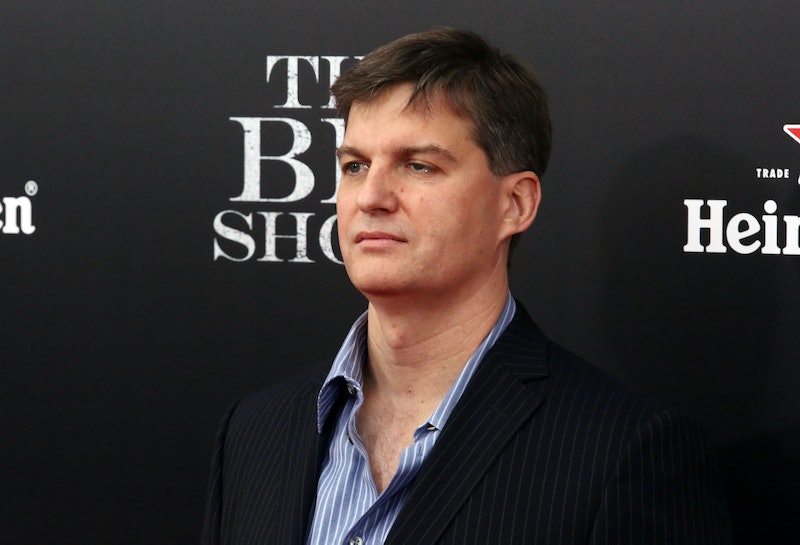 The economy still hasn't fully recovered from the 2008 financial crisis that saw the collapse of the U.S. housing market and the federal bailout of several "too big to fail" banks. Now, a new film called The Big Short is sharing the behind the scenes story of what happened, but in an unexpected way. That's because the movie, directed by Anchorman helmer Adam McKay, is more of a dramedy than a super serious account of the crash. The movie stars Ryan Gosling, Steve Carrell, and Brad Pitt as three characters who are influenced by real life people who bet against the big banks, and Christian Bale as a fourth, Dr. Michael Burry, who is a real person. So given that Burry is depicted in this film without disguising his name, and in a not always flattering way, mind you, what does the real Michael think of The Big Short ?

Although Burry hasn't said much to the press (or anything, really) about his impressions of the film, I think it's safe to say that it has his stamp of approval. After all, he did attend the film's premiere, which is usually a sign of someone who's excited to see themselves portrayed on film and not someone who opposes the film's creation. According to The Hollywood Reporter, he also worked with Bale on set to help get his character down, and Bale being the talented thespian that he is, really captured Burry's essence.

"Michael [Burry] came to visit the set a number of times," Bale told THR. "And he's a fascinating individual. We just talked for, it was like eight or nine hours straight. I became very fond of him. I love playing real characters because you create a mannerism, and the director might question that, but you've got the evidence. You can just call him over and chat with him for a little bit and go, 'See, right?'"

Bale also prepared Burry beforehand by letting him know that he would be portraying his flaws as well (the man did play a role in the greatest economic crisis of this generation, so he's not exactly a hero). "Whenever I meet with somebody I am going to portray, I always start the conversation by saying that they have to accept that there is no interesting story that glamorizes everybody," the actor told Vulture. "It’s about truth as much as possible, although of course we are taking some license because we are packing this all into a very short amount of time, but the goal is to stay as true as possible within that license. And you know, I don’t know if I could be so trusting, if someone was telling my life story, I would feel very vulnerable. But they were all very adventurous with that idea and accepted it."

Burry was apparently so interested in Bale's performance that he literally gave him the clothes off his back for Bale to wear in the film, which implies that he really trusted Bale in getting his portrayal right. And if that's not enough proof that Burry is likely a fan of the film, there's also that fact that he's in the movie itself. Near the beginning of the clip below, when the two men walk into the office and there is a man talking on a white phone, that man is Burry.

So even though Burry has not gone on record saying he's in favor of The Big Short, anecdotal evidence suggests that he is definitely cool with this movie being made about him, and probably very approving of Christian Bale's portrayal of him. As well he should be, as the movie is getting rave reviews. And for a guy with the predictive prowess of Burry, I'm not at all surprised that he seemed to know it would turn out well from the beginning.

More like this
Lindsay Lohan & Jonathan Bennett Celebrated Mean Girls Day Very Differently
By Jake Viswanath
Alan Rickman's Diary Reveals Why He Considered Leaving 'Harry Potter'
By Darshita Goyal
What Is Miles Teller’s Net Worth? The 'SNL' Host's Bank Account Is No Joke
By Meg Walters
Lin-Manuel Miranda & Tituss Burgess React To 'Little Mermaid' Casting Backlash
By Radhika Menon
Get Even More From Bustle — Sign Up For The Newsletter