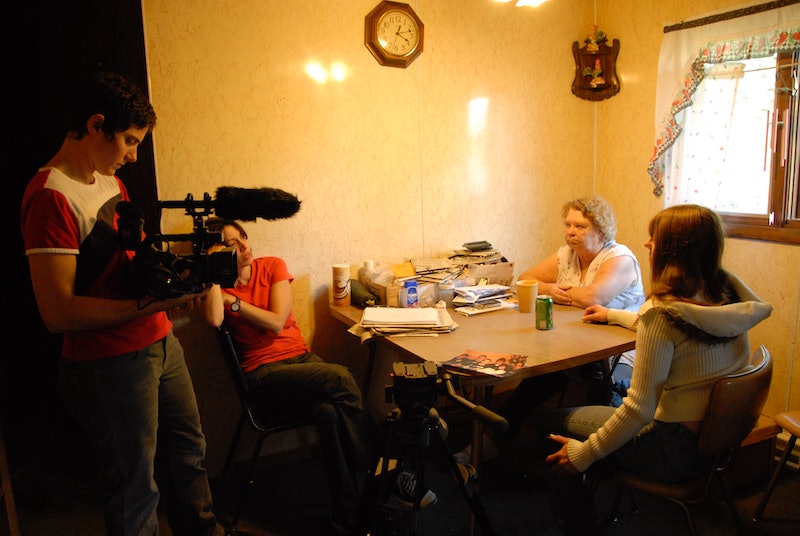 If you have a Netflix account, chances are you've already made your way through all 10 episodes of the gripping true crime series Making A Murderer, which has the nation talking about Steven Avery's 2007 murder conviction and how he still claims he's innocent. The popularity of the show likely means we can expect even more true crime series in the months and years ahead — because we all know that Hollywood likes to take a good idea that worked once and run with it. Serial is already being turned into a TV show, and The Hollywood Reporter is predicting a wave of MaM -inspired series next pilot season. But, regardless of how many more true crime programs may be produced in the future, there are already plenty of documentaries to watch if you loved Making A Murderer .

The roots of our modern fascination with true crime can be traced all the way back to 1924, when Edmund Pearson published his non-fiction book Studies In Murder , an anthology of five essays pertaining to real-life killings — including, most famously, the case of Lizzie Borden and her infamous axe.

Here are 13 true crime documentaries from the 92 years since Pearson kicked things off that you can watch while you impatiently wait for a potential Making A Murderer Season 2:

This series, which ran for 26 episodes on NBC back in the '50s, started as a magazine column by Erle Stanley Gardner, before making the transition to television. Every week he and a team of seven attorneys would take on the case of a person who claimed to have been wrongfully convicted and had exhausted all other legal options available to them.

OK, so you can't technically "watch" Truman Capote's seminal 1966 book — but no list of true crime is complete without the work that kickstarted the phenomenon, transforming it from a couple of isolated incidents like Studies In Murder and The Court Of Last Resort into a full-blown genre unto itself. And if you do want to watch it, you can watch the 1967 movie of the same title, a dramatization of the case Capote documented in his book, or the 2005 movie Capote, about the author's research into the book — which earned the late great Philip Seymour Hoffman his Oscar.

Where to watch: Both In Cold Blood and Capote are available on DVD from Netflix.

From acclaimed documentarian Errol Morris, this non-fiction film tells the story of Randall Dale Adams, who was convicted and sentenced to life in prison for murdering a police officer — a crime he didn't commit. One year after The Thin Blue Line was released and raised awareness of this miscarriage of justice, Adams was released from prison after serving 12 years.

Where to watch: Available for streaming on Netflix.

Over the course of 15 years, HBO produced three documentaries about the wrongful convictions of Jason Baldwin, Damien Echols, and Jessie Misskelley — also known as the West Memphis Three — who were sent to prison for the 1993 murders of three young boys. (The '96 film is followed by 2000's Paradise Lost 2: Revelations and 2011's Paradise Lost 3: Purgatory.) If three feature-length films sounds like too much for you, Lord Of The Rings director Peter Jackson produced one documentary on the same subject, 2012's West Of Memphis.

In 2000, 15-year-old Brenton Butler was convicted of killing a tourist in Jacksonville, FL, based primarily on Butler's own confession — which, like Brendan Dassey, the young boy later claimed was coerced. (Although State Attorney Harry Shorstein stated at the time, "There has never been any evidence that this office was or is aware of that Brenton Butler was physically abused in order to obtain a confession.") Sunday Morning earned French filmmaker Jean-Xavier de Lestrade the Oscar for Best Documentary Feature.

Where to watch: Available for streaming on Amazon Video.

Three years later, Lestrade made another true crime documentary — this time as a television series chronicling the case of Michael Peterson, a North Carolina novelist accused and convicted of murdering his wife. Eight years later, Lestrade would produce a two-hour follow-up titled Last Chance after further developments in the case.

Where to watch: Available for streaming on Amazon Video.

Of course, not all true crime documentaries are about murder. The story of the volatile relationship between NYC attorney Burt Pugach and his girlfriend Linda Riss has to be seen to be believed. Seemingly pulled from the pages of a noir gangster novel, it features jealousy, betrayal — and people hired to throw lye in a young woman's face.

Sure, this documentary starts with a murder — when Andrew Bagby is murdered by his girlfriend Shirley Turner — but the bulk of the film deals with the custody battle over Bagby's son Zachary, with whom Turner was pregnant at the time of the murder. The ensuing struggle between Turner and Bagby's distraught parents is by turns infuriating and heartbreaking.

Directed by prolific documentarian Ken Burns, this film chronicles the convictions of five young men — four black and one Hispanic — of the brutal assault and rape of a woman in Central Park in 1989... an attack that DNA evidence would later prove they did not commit.

Where to watch: Available for streaming on both Netflix and Amazon Prime.

In 1994, 13-year-old Nicholas Barclay disappeared from his Texas hometown. Three years later, he turned up in Spain, claiming to have been kidnapped and sold into a sex slavery ring, from which he had eventually managed to escape. He was sent home to Texas to his ecstatic family. But was it really Nicholas? The answer to that question will send you down a chilling rabbit hole, making this documentary even scarier than some fictional horror movies.

Where to watch: Available for streaming on Netflix.

If Making A Murderer shattered your faith in the American justice system, maybe it will be restored by this documentary about Pennsylvania judges accepting kickbacks in exchange for sending juveniles to prison for minor offenses. Oh, did I say "restore"? I meant, "damage even further." Whoops.

If for some reason you still haven't caught up on Sarah Koenig's addictive podcast, now's the time to dive in. Unlike Making A Murderer, which has a very clear opinion on Steven Avery's case, Koenig spends the 12 episodes of her podcast waffling back and forth on Adnan Syed's guilt or innocence — making this either the most fascinating or the most frustrating true crime story on the list.

Where to listen: Available for download from iTunes and SerialPodcast.org.

Unlike most of the documentaries on this list, which seek to exonerate persons who were wrongfully convicted, this HBO miniseries takes a different tack — attempting to finally and conclusively incriminate a man who has allegedly gotten away with murder: wealthy NYC real estate heir Robert Durst, who is suspected to have killed at least three people. The ending will leave your jaw on the floor.

Where to watch: Available for streaming on HBO Go and Amazon Video.

As you can see, there's no reason to despair if you've made it all the way through Making A Murderer and are jonesing for your next true crime fix. There are more than enough options out there to keep you bingeing — and fuming in indignation — for many, many months.

More like this
This First Look At 'The Gold' Shows Jack Lowden In A Whole New Light
By El Hunt and Sam Ramsden
Ozzie’s Coming Out Scene With Kitty On 'That ’90s Show' Has Twitter Sobbing
By Brad Witter
A New Netflix Doc Will Explore The Unsolved Murder Of Jill Dando
By Sam Ramsden
A Teen Murder Victim's Horrific Diary Entry Helped Police Find Her Killer
By Brad Witter
Get Even More From Bustle — Sign Up For The Newsletter
From hair trends to relationship advice, our daily newsletter has everything you need to sound like a person who’s on TikTok, even if you aren’t.