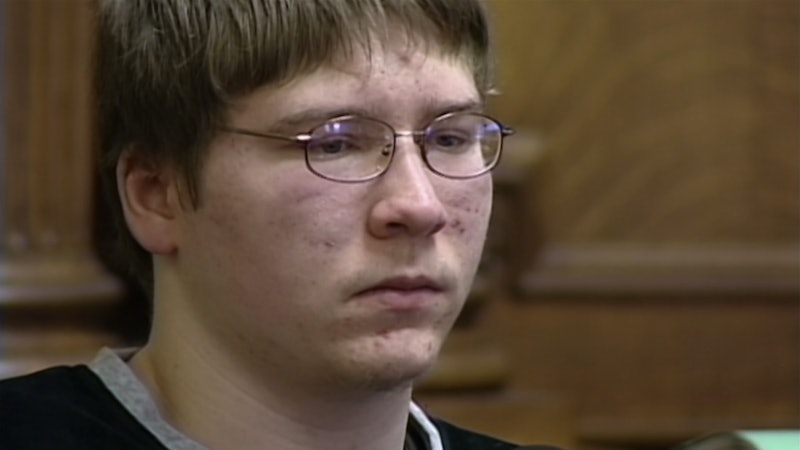 Just as Serial and The Jinx did before it, Netflix's Making A Murderer has enraptured Americans eager to put on their detective caps to find out who was behind the murder of 25-year-old Teresa Halbach. But while much of the focus has been on Steven Avery, a Wisconsin man who was first made famous after spending 18 years in prison on a wrongful conviction for the sexual assault of another woman, it's important to remember that there are two men whose fates hang in the 10-episode docuseries. Avery's nephew, Brendan Dassey, also stood accused of Halbach's murder, and near the close of Making A Murderer, you find out what exactly happened to the teenager.

During an interrogation, Dassey, who was then just 16, confessed to sexually assaulting Halbach in Avery's trailer and cutting her throat to help his uncle kill her. But Dassey later claimed this confession was false and coerced by authorities. No scientific evidence corroborated this narrative — none of Halbach's DNA was discovered inside of Avery's home.

Dassey, who has already exhausted all of his state appeal options, does have a small possibility for a new trial. His case is waiting to be reviewed by a federal judge on the claim that his first trial lawyer, Len Kachinsky, allegedly did not have Dassey's best interests at heart and effectively aided the prosecution in building its case against Avery. In a statement, Kachinsky's law office denied that characterization to Bustle. "Dassey has not convinced us that Kachinsky's actions amounted to an actual conflict and that Kachinsky's advocacy was adversely affected, such that it was detrimental to Dassey's interests," the statement read. "He is not entitled to a new trial or hearing."

Hacktivist group Anonymous has also taken up the Avery/Dassey cause, claiming this week that it will release evidence that will bring new light to the two men's cases. Anonymous claims it has proof that some members of the Manitowoc County Sheriff's Office allegedly plotted to frame Halbach's murder on Avery, though the group has yet to make good on its promises.

Today, Dassey is 26 years old and is at the Green Bay Correctional Facility in Green Bay, Wisconsin — coincidentally, the same location where Avery served eight of 18 years for his wrongful conviction. Making A Murderer has brought renewed interest in both Dassey's and Avery's cases, and perhaps they might find themselves taking the same path as Adnan Syed, the subject of Serial's Season 1, who awaits a new post-conviction hearing in February for the death of ex-girlfriend Hae Min Lee.

More like this
Where Is Lionel Dahmer Today? Jeffrey Dahmer’s Father Reflected On The Serial Killer’s Death In 2020
By Brad Witter
Here's What Jeffrey Dahmer's Dad Has Said About His Other Son, David
By Grace Wehniainen
Glenda Cleveland Died 2 Decades After Trying To Turn In Neighbor Jeffrey Dahmer
By Brad Witter
Lori Vallow’s Son Was Arrested For Sexual Assault Days Before 'Sins Of Our Mother' Premiered
By Brad Witter
Get Even More From Bustle — Sign Up For The Newsletter