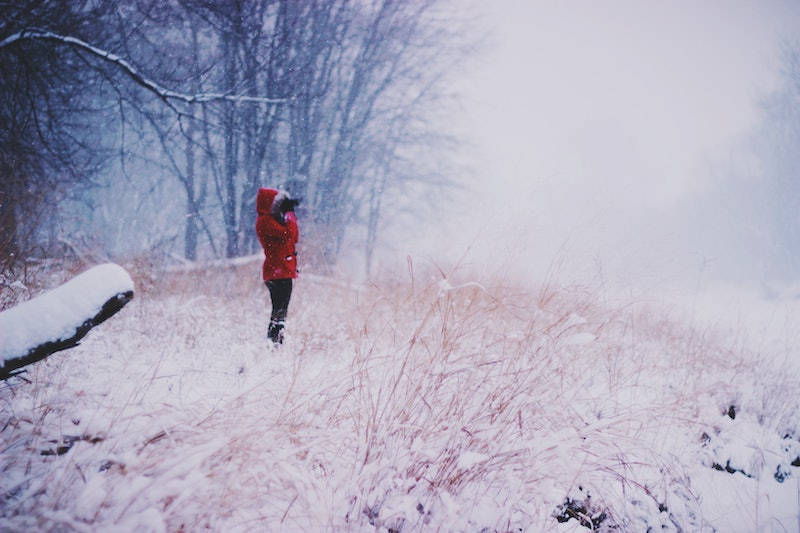 Winter gets a bad rep. As seasons go, winter is the nerdy high school underdog who has to eat lunch alone in the bathroom — and it’s just not fair. Because winter is the best season. I know it; you know it; we just need the world to know it. Because summer is not all it’s cracked up to be.

This time of year, when Christmas has been and gone (sob), conversations pretty much revolve around hating on winter. So if you’re looking for someone to join in your excitement about the falling snow and the chilly temperatures, you’re pretty much out of luck. (Except for with me. I will always get excited about winter with you.)

Luckily, we don’t need people to interact with when there’s something much better to keep up company: books. And these nine books are totally on the same page (pun intended) as you when it comes to winter. They know that there’s nothing better than cozying down with a roaring fire and a mug of cocoa and some wooly socks. They know that ice skating > sunbathing, and snowball fights > water fights. And they know there’s something magical about a dark winter’s night; something that a hot summer’s day could never even hope to rival. They totally get you: Winter is the best.

1. Little Women by Louisa May Alcott

OK, so Little Women’s winter sections mainly revolve around Christmas — but you can definitely enjoy the frosty scenery all the way to February. Like when Amy falls through the ice? That’s some serious winry drama right there, and not a Christmas tree in sight.

2. What Katy Did At School by Susan Coolidge

The premise of this sequel to What Katy Did is that Katy and her sister Clover are sent to school up north, as their father thinks “the climate is just what [they] need.” Sure enough, the girls find the cool mountain air to be “full of a brilliant zest.” The cold is extreme — the girls regularly wake to find their toothbrushes frozen stiff — but it’s not depressing. In fact, Katy finds “something in her blood which responded to the sharp tingle of frost.” That’s something that all winter-lovers will be able to relate to.

Laura Ingalls Wilder can romanticize anything. Her childhood was not a privileged one, but her descriptions of growing up in poverty somehow make it seem charming. The Long Winter is no exception; the severe “Snow Winter” of 1880–1801 must have been terrifying and painful to live through, but Wilder approaches it with the same positivity that made the world fall in love with the rest of her books. In the midst of cold, hunger and hardship, the family always celebrate what they do have. Maybe that’s one of the things I love so much about winter: you spend more time indoors, with the people you love.

4. The Snowman by Raymond Briggs

Yeah, so the TV special is most definitely a Christmas film (not least because of its introduction by David Bowie, which is a Christmas present in its own right), but did you know the original picture book didn’t actually include the Father Christmas scene at all? It’s just further proof that you don’t need Christmas to make winter a magical season; who needs flying reindeer when you have flying snowmen?

Snow represents purity in The Great Gatsby, and contrasted with the polluted and corrupt East coast. The group hungrily draw in “deep breaths” of cold air while in the Midwest, which is totally how I feel when I’m out on a chilly winter walk — like the very breaths I’m taking are giving me a new clean start. Winter’s neat like that, right?!

OK, snow is great for throwing and rolling in and crafting into human shapes — but it’s also good for solving murders. In the Danish novel Miss Smilla’s Feeling For Snow, Smilla’s childhood in Greenland taught her all about snow — and so when a young boy’s fatal fall from the roof is dismissed as a tragic accident, she’s able to interpret the snowy tracks to reach a totally different conclusion.

7. The Magic Mountain by Thomas Mann

The Magic Mountain contains one of my favorite descriptions of wintry weather: “child-like and funny”. Yeah, snow is beautiful and picturesque, but it also makes you want to giggle and run around in it like a toddler. It also compares snow to “thick pillows, so fluffy someone must have plumped them up,” which sounds like the best nap time ever. Man, I just love snow.