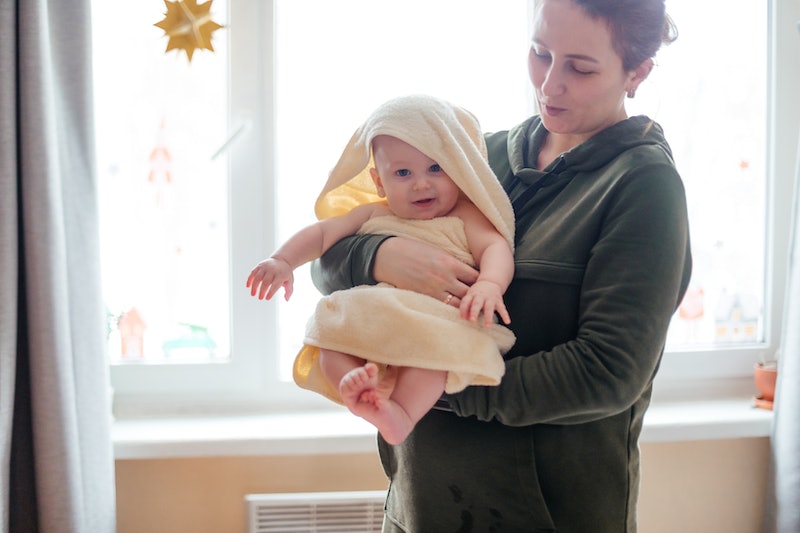 I always knew that I didn't want to have kids. But — and this may shock both people who have read my past pieces about not becoming a mom and anyone who has spent time around me in real life (and noticed that I possess all the maternal instincts of a discarded tampon applicator) — I wasn't always sure that that meant that I actually shouldn't have them. Weird, right? Most people who have a hunch that they shouldn't, say, become a nuclear physicist or move to Argentina follow those hunches without a second thought — but in our culture, it is notoriously hard to make it from your first period to your last one kid-free without roughly one million strangers, friends, and family members second-guessing your decision. And all the second-guessing can get in your head.

When I was growing up, my declarations that I didn't want kids were typically waved off with a "Everybody thinks that when they're young." And hey, maybe they do — I mean, it is notoriously hard to sell a 13-year-old on the idea of personal sacrifice (and also touching another human being's poop). So, for a long time, I believed that my instincts to not have kids were just a phase, and I waited to "mature" into a set of beliefs that didn't make everyone so uncomfortable. I thought of having kids as just another in a series of bullets I had to bite in order to be considered normal. And hey, I used to be freaked out by spicy food, and now I love it! Couldn't connecting myself permanently with another human being for the rest of both of our lives kind of turn out the same way?

If you're in the same spot I was a decade ago — with a heart that says "I don't think this is a good idea" but a brain that says, "Oh, you're probably just being nervous" — read on.

1. You're Only Doing It Because You're Afraid Of Missing Out

No doubt about it, raising a human being to adulthood is an extraordinary experience for those who truly want it. Hearing a parent (who is in a good mood and has also recently slept more than three consecutive hours) talk about life with their kids can make parenting sound transcendent — like one of those roughing-it camping trips where it kind of sucks at the time, but then you come back home on an higher spiritual plane and you never again think about performing a citizen's arrest on people who listen to music without headphones in public.

And parenting is totally transcendent — for some people. But anyone who claims that it is transcendent for everyone has a greater agenda than just making sure that you live a fulfilled life. And FOMO is a terrible reason to create a new, sentient being. But don't take my word for it — feminist author (and parent) Jessica Valenti noted, in her book Why Have Kids, that "There also needs to be some sort of acknowledgement that not everyone should parent — when parenting is a given, it's not fully considered or thought out, and it gives way too easily to parental ambivalence and unhappiness."

2. You're Only Doing It Because People Say You'll Regret It If You Don't

As anyone who has ever publicly floated the idea of skipping parenthood can tell you, you'll be immediately told that (not asked if) you'll regret your decision when you're older. It should go without saying, but: having kids because your dad/aunt/a stranger at the gym told you you'll live to regret it is probably a bad call.

This isn't to say regret is never a positive motivator. Regretting not going for our dreams is what actually makes us do something with our lives instead of just staying home and watching TV. In a pro-"having kids because you might regret it" piece in Forbes, Peggy Driscoll claims that "Thinking about your choices and actions from the perspective of your future self can be useful, especially if it helps you make the better decision."

Fair enough. But think carefully about your fear of regret here — is it something you actually think that you, personally, might regret? Or is it something that so many people have told you you'll regret, you assume they must be on to something? And of course, there's the little-discussed flip-side of the coin: that many parents regret having children, as well. So why aren't you hearing about that? As psychologist Samantha Rodman told Yahoo Parenting, "regretting kids is a huge taboo ... It can be hard to accept that something so 'natural' makes you so unhappy."

3. You're Only Doing It To Make Your Partner Happy

Many of us have heard stories about people who were ambivalent or even actively didn't want kids, ended up with partners who were desperate for them, gave in to the pressure, and then couldn't be happier with the way things turned out.

Of course, this is a possibility. People aren't perfect judges of what we actually want — far from it. However, folks who take this risk and end up with the opposite outcome — they took a chance on having kids because their partner was desperate to be a parent, and they ended up hating it — are also out there; they're probably just not bringing it up over brunch.

When one partner is suddenly desperate for a baby, it may have more to do with the marriage than with the desire to be a parent. He suggests that maybe the desperate partner is hoping to solidify a shaky relationship by drawing his or her spouse in more deeply. Maybe on some level, there's a hope that the baby will provide a level of trust, or intimacy, that's currently lacking in the marriage.

So what should people do when there's a mismatch in levels of offspring-related excitement? Relationship expert and author Harriet Lerner told The Huffington Post that, "The party who wants children needs to get clear about whether the wish for a child is greater than the wish for the relationship — or vice versa." If you're currently dealing with this, I assume you're not going to make your entire decision based on an article with Broad City GIFs in it — but if I have any pull here, I'd ask you to please think twice.

4. You Have Genuine Concerns About Your Ability To Parent A Child

Again, there probably isn't a parent alive who hasn't had some worries about their ability to parent — in fact, never worrying about your ability to be a good parent is probably a sign of terrible parenting.

But because so many people have been there, legitimate concerns about problems that might prevent you from successfully parenting often get swept under the rug. Personally, I have some mental health issues that I feel are incompatible with caring for a child (or having anyone be fully dependent on me, honestly). For years, many people, especially family members, blew off that concern — after all, people with all kinds of health issues, mental and otherwise, successfully parent and have a blast doing it, right? True. But when I really thought about it, I realized that I could not be there for a kid in the way they would need in order to feel loved and protected in this world. And I'm glad I trusted my gut, instead of taking a gamble with a human being who would spent the rest of their life paying for it if I gambled wrong.

Again, this is about knowing yourself, and being able to tell a baseless worry from a legitimate, genuine concern. Are you just terrified of the responsibility, as any sensible person would be? Or do you have red flags going off inside you that people are urging you to ignore?

5. You're Only Doing It Because You're Afraid That No One Will Take Care Of You When You're Old

Ah, this chestnut. The idea that children are a preventative measure against being lonely and neglected in your twilight years is a bit of a fantasy to begin with — though some of us come from close-knit families where elders are always part of the picture, many of us come from families where we grew up only seeing our grandparents a handful of times a year, and not being incredibly involved in their daily lives. So children are no insurance policy against spending your senior years alone. And according to a 2010 study in Aging and Mental Health, "Compared to parents, childless elders with a disability generally do not receive less care or have worse psychological well-being."

And kids aren't the only (or even the best) way to prepare for old age. Older people without kids can make plans for their future health care needs, too, including saving for long-term care, appointing a proxy, and living in an area where they won't be socially isolated.

If you're on the fence about the kid issue, only you can figure out the answer. But if you know in your heart that you don't want kids, and are just afraid of what life might look like if you followed that impulse — because everyone has told you how much your life will suck without kids — don't be. Living a life that reflects your own true beliefs and values is more of a shortcut to happiness than any specific biological act will ever be.

More like this
The 19 Best Tweets & Memes About Bisexual Awareness Week
By Lexi Inks
The Spiritual Meaning Of Angel Number 000, Explained
By Kristine Fellizar
21 Signs You're Not In Love Anymore
By Sara Altschule, Kathleen Ferraro and Carolyn Steber
These 4 Zodiac Signs Will Be Extra Lucky In October
By Brittany Beringer
Get Even More From Bustle — Sign Up For The Newsletter